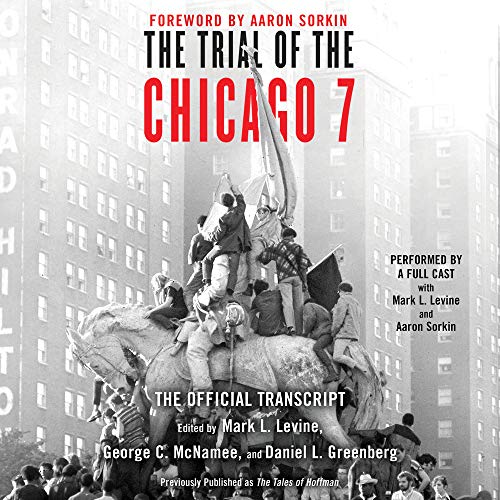 The Trial of the Chicago 7: The Official Transcript

Republished 50 years later to coincide with the release of the Academy Award-nominated film of the same title written and directed by Aaron Sorkin with an all-star cast, this is the classic account of perhaps the most infamous, and definitely the most entertaining, trial in recent American history.

In the fall of 1969 eight prominent anti-Vietnam War activists were put on trial for conspiring to riot at the 1968 Democratic National Convention in Chicago. One of the eight, Black Panther cofounder Bobby Seale, was literally bound and gagged in court by order of the judge, Julius Hoffman, and his case was separated from that of the others.

The activists, who included Abbie Hoffman, Jerry Rubin, and Tom Hayden, and their attorneys, William Kunstler and Leonard Weinglass, insisted that the First Amendment was on trial. Their witnesses were a virtual who’s who of the 1960s counterculture: Allen Ginsberg, Timothy Leary, Arlo Guthrie, Judy Collins, Norman Mailer, among them.

The defendants constantly interrupted to protest what they felt were unfair rulings by the judge. The trial became a circus, all the while receiving intense media coverage. The convictions that resulted were subsequently overturned on appeal, but the trial remained a political and cultural touchstone, a mirror of the deep divisions in the country. The Trial of the Chicago 7 consists of the highlights from trial testimony with a brief epilogue describing what later happened to the principal figures.

Being French, I only had a vague idea of "WTF" was going on in that era. This transcript is invaluable as an illustration of what that moment in history was. It is funny at time, frustrating at many (due to the judge). The voice actors did a stellar job. I do recommend warmly.

This was an entertaining as well as educational dramatization. I enjoy full cast Audible productions and this doesn't disappoint. It reminds me of our current political national discourse. on one hand you have a generation questioning the old guard and bashing at the foundation of the establishment. Then you have the old conservative guard. Frightened that this new thing might destroy life and security as they've known it. Willing to use hyperbole and any other means to maintain what they see as The sacred American Way.

Now for the cons: While I feel the actions of Judge Hoffman were a flagrant violation of the defendants right to a fair trial. Also his intimidation of the attorneys which he should have known would be a slam dunk for successful appeal. Still the actor voicing the judge did make him sound like a Simpson's cartoon character and I wonder if that was intentional. probably not. But, still. Also I do imagine that constantly being laughed at and name called in a court of law was unsettling and infuriating to the aging judge.

This has caused me to go back and explore a little history and that's a good thing. Full disclosure: I am a 63 year old white Southerner from Alabama. A moderately (which means left wing in the South) left of center Democrat. Yes America there are still Democrats left in the South. All in All a highly recommended production.

A look into the past

The book, beautifully performed by a stunning cast, gives you a look into the trial of the Chicago 7. I especially loved the performance of J.K. Simmons, trying to show an unbiased reading with words that were clearly biased. Jeff Daniels made me really feel for Weinglass' issues with the Judge. I suggest this book highly.

This book is the trial transcript so massively editted the reader (listener) has no idea if this is a basis perspective or a realistic version of the trial. Terrible

This is a bonkers trial.

This performance was an excellent look into a strange court in a trial that had me laughing throughout as the persons inside the court were part of an insane proceeding.

I was unaware of this incident before watching the Movie about it on Netflix and seeing the YouTube channel’s Legal Eagle’s review. I’m coming away more informed but perhaps less enlightened, as this didn’t present the prosecutions arguments in a convincing manor, and the jury didn’t find the defendants innocent.

A stellar review of the "highlights" of this case.

If you've seen the movie inspired by this case I highly recommend this book.

This book should be required reading for every young person who uses the phrase "boomer". Know your history - because it was my generation who made your freedoms possible.

The performance here is excellent, I particularly enjoyed JK Simmons' portrayal of the Judge. In fact, that's what initially caused me to buy this recording.

However, I think the title "Trial of the Chicago 7: The Official Transcript" is misleading. This is not the transcript, but a collection of 1-3 minute excerpts from the transcript that the editor thought represented the most striking or entertaining moments of the trial. As a result, it is impossible to follow the arguments being made or the testimony being given in the trial.

Maybe this is necessary given that the transcript is apparently 22,000 pages long, but I think the title and marketing of the recording are misleading.

While I don’t know what was edited out, and will admit that there was likely some bias, the words of the participants do speak for themselves. A different slant, other narrators, would not have altered the actual proceedings.
I’ve already recommended this to several friends who are interested in the history of free speech, race relations, activism, and/or the vagaries of law and incarceration.
The narrators all did an excellent job of capturing the essence of the people they played.
We cannot change history. We can learn about it, extract a lesson, and keep moving forward. What we learn, and how we move, is an individual decision.

The primary feature of this selection which garners reaction, positive and negative, is obviously the editing. It is clear that large swathes of the transcripts are edited out, but what remains more than adequately conveys the nature of the trial. Anyone who's dealt with the criminal justice system recognizes a rigged game. And this trial, over 50+ years ago, showcases the uphill battle just to recognize simple truths and constitutional rights, held hostage by doddering old judges ruling over autocratic court fiefdoms. It's easy to see how something so tragic has to be laughed at, and is, consistently, to the judge's consternation.

All the personalities are precisely and effectively defined, and notwithstanding the absurdities that are spoken by some, everyone is fairly represented. In particular reference to the reviewer who was critical of the voicing of the judge, I don't know how any characterization of him could be anything but cartoonish, with his blatantly narcissistic,mentally infirm and racist (despite the articles he cites) nature. Altogether, an enjoyable listen to a judicial horror story, the fascist mentality of which we sadly have not yet eradicated in the country.

Real life court hearings can indeed be more interesting than on television. This historic case could just as well be read (or listened to) as a character study.