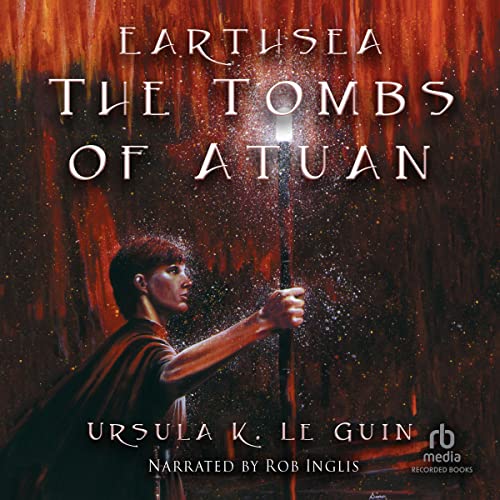 The Tombs of Atuan

A bold young wizard enters the labyrinth of the sacred Tombs of Atuan to steal the magical ring of Erreth-Akbe. Instead, he finds an unhappy priestess in need of a hero to save her.
©1970 Ursula K. Le Guin (P)1994 Recorded Books, LLC
Épique
Afficher plus Afficher moins

In Some Ways, the Best of the Original Trilogy

If you liked The Wizard of Earthsea, this is a must-read sequel. I love how LeGuin pulls on a few threads from the first novel but mostly departs into a completely different tale ... in tone, structure, plot, and even in geography. Marginalizing Ged as a character until halfway through is a brilliant stroke and gives us a new character to care about in the form of a young girl, chosen one of the old powers of the Earth. The result is powerful ... lyrical, dusky, narrow in scope. Wow. It probably works best for young adults, as a coming of age story for girls. But it has a universal appeal.

Rob Inglis's imperfect telling of "Tombs of Atuan" doesn't do justice to what is fundamentally a perfect story. Inglis's vocal range is not particularly strong, and it ignores nuances within the characters he represents. Ged, for instance, is no longer the youngster he was in "Wizard of Earthsea," but he's certainly not the elderly sage he sounds in Inglis's performance of "Tombs." Part of the problem is associative: Inglis uses precisely the same deep tone for Ged's voice in "Tombs" as he does for Ogion's in "Wizard." While this narrative decision does underscore the subtle parallels between the more mature Ged and his aged master (for instance, the way he controls the earthquake while underground), it mischaracterizes the age gap between Ged and Arha, which is not as great as Inglis makes it sound. Ged's voice is certainly deep, as the story explicitly states, but Inglis's rendition makes him sound ancient.

A tale of a Priestess

This is more the tale of the priestess than it is that of the Wizard. With that in mind though, it is a solid tale well worth listening to.

Alone, no one wins freedom.

"Alone, no one wins freedom."
- The Tombs of Atuan

I adore Le Guin's voice and her soul. I hate fantasy. Or, rather, I have told that to SO many people I believe it is true. But, I make exceptions. Le Guin could have writen self-help and business books and I'd gladly read them. She was a feminist, but unafraid to write a book both with a female lead, and a female lead who is helped by a man/wizard. She is interested in power, in evil, in humanity, in big questions and nuanced answers. Her prose is very good, but her characters are amazing. She recognized, I believe, that the secret to writing about strength is to write about weakness. Just like the secret to writing about light is to write about darkness. This isn't one of her GREAT novels, but I might even change my mind about that, if the ideas in this book are still pounding around in the labrynths of my brain in a couple weeks. I might need to give this book 5-stars just to escape it.

Dull and dreary compared with the first book

This book generally takes place in a dungeon setting, with a weak protagonist. This isn't inherently bad, but it's a significant departure from the vast landscape and dynamically powerful hero of the first book. I found it generally dreary and unsatisfying, but I'm still hooked on Le Guin's sage writing style and jumping right into the next book.

The Tombs of Atuan

I read this and A Wizard of Earthsea after watching the TV adaption. As I stated in my review of the previous book, I was not expecting such a well written and engaging book as this one is.
This book follows Tenar, who is a priestess dedicated to vengeful and dark gods called the Nameless Ones. She starts out as a cruel and hard girl who grows into a cruel and hard young woman. Then Ged shows up and the story becomes quite redemptive. Since this is considered a YA novel, I wasn’t expecting good character arcs, but this book surprised me! I thoroughly enjoyed both the characters and their stories, and the well written world they lived in. Le Guin knows excellent prose and character development and these books have proven it. I am looking forward to the third one!
I will say, if you are looking for something resembling the TV mini series, you won’t find it here. The dialogue is not childish, the descriptions are brief but effective, and the story is darker than expected. Read this when you are needing a break from less accomplished authors!

Where's the rest of the story?

This book rated between 2 and 3 stars for me. It's not because it was badly written, but it's because not much really happened. It was like reading the first 3 chapters of a book, and then having the book end right with you get introduced to the characters and they actually do something. Or it was like reading a short story in an anthology. I'm hoping the 3rd one has a lot more meat to it.

Though significantly shorter than A Wizard of Earthsea, The Tombs of Atuan showcase Le Guin's incredible skill at delivering powerful narrative, style, and characterization in very little space. Compared to the first book, which crosses the line somewhat between fairy tale and typical fantasy styles, the Tombs of Atuan in its limited scope feels much more fairy tale and surreal. It feels ancient - showing a place in Earthsea which has remained unchanged for thousands of years, making you feel as though you are delving the secrets of an ancient land like something out of the Hyborian age.

Something of an inverted repeat of A Wizard of Earthsea, this story is not that of a peasant boy from the archipelago-lands who learns to become a powerful wizard, but instead follows one of the pale-skinned Kargs - those raiders who featured very briefly yet importantly in the beginning of the first book. This Karg is the child priestess of an ancient cult dedicated to the dark gods of the Kargish peoples, chosen from birth as the reincarnation of her predecessor. The story follows how she processes her identity, being at once imbued with great cultural prestige and power, yet from a personal angle being less than powerless. It is a coming-of-age type narrative far more compelling and unique than any of the thousands of YA novels you will find out there, despite being just 4 hours long.

Of course, what's really engrossing is Le Guin's style. She is a master of her craft. Upsettingly so. While I am personally a fan of great, beautiful descriptions and fantastical purple prose (in good measure), Le Guin is able to convey so much feeling and content in but a handful of words. She takes up no more space than she needs to, and every sentence spoken by any character is a compelling little quote that still manages to not feel unnatural or out of place. At times this can come across as simple, a bit basic or over-quick, but given the fairy-tale and highly mystical nature of the world of Earthsea, it in no way detracts from the overall themes and aesthetics, and if anything bolsters them. Of note is the surrealness of the book. It channels a feeling of emptiness and mystique which is never actually followed up on. This is compelling. It feels the way the world did when you were a child. There is very little outright magic in this book, compared to A Wizard of Earthsea, and the lands of Atuan are grim and unchanging - yet this makes the whole story seem much more bizarre and mysterious, making you wonder just what is real and what is imagined for the main character.

I will be continuing this series in due time.

A slow start, but another great Earthsea installment

This second installment of the Earthsea series had a very slow start, but once Sparrowhawk arrives, the story picks up. Featuring a female teenage protagonist and a coming of age story, I was surprised that this story deals with her losing her faith in religion when she is faced with the truth, and it is handled very well. This book doesn’t have an aggressive agenda, something I can’t say for some other major Fantasy series intended for younger audiences *cough* Narnia *cough*

I also appreciate the theme of seeking truth versus believing what you are told, and the value of seeking the wisdom of expertise, a through-line theme of the series. It today’s modern age of “my ignorance is a good as your knowledge” it’s nice to return to a world where education is revered.

Besides featuring a female protagonist, I also noticed a detail I overlooked in the first book: Sparrowhawk is described as being dark skinned. We rarely get fantasy books with non-white protagonists to this day, and a female protagonist was very rare at the time this book was written, so it’s amazing to me how far ahead of its time this series was.

Interestingly, this story also flips the LOTR conception of a “ring of power” on its head. Sparrowhawks’ mission to find a certain ring of power that will restore peace is in stark contrast to the One Rings ability to increase the power of the user. This books ring is like the anti-One Ring.

The relationship between Sparrowhawk and Arha is well developed in such a short story, and it’s interesting to see the further development of Sparrowhawk through the eyes of a different character. He has clearly learned much since the first book, and has become both more powerful and more wise. The character or Arha was a bit annoying early on, but by the end her hero’s journey is as believable as it was nuanced.

The narrator, the same guy who reads the LOTR books, is great.

All in all, I am very much enjoying this series.

The first one was better

Not to say that this one wasn't good, but the first was better. I did like though that this one did not only have one main character, but two and that there was not the usual romance between those. Very well written too!