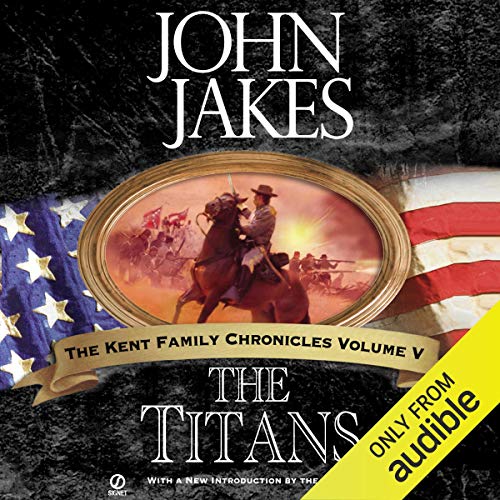 When Jephtha Kent leaves his family to go north, the Kents come under the influence of Louis, the most opportunistic son. While the nation splits on secession and slavery, the Kents nearly fall to greed and self-interest. The Civil War divided families and friends and left wounds some of which are still not healed. That the Kents survived was a miracle: that they came through with vigor intact held great promise for the rich decades that lay ahead. The Titans is the fifth volume in the Kent Family Chronicles preceded by The Furies.

These comments address The Kent Family Chronicles, the entire series of eight books, in audiobook format. All books are narrated by Marc Vietor. The entire series is approximately 125 hours of listening. Shortest book is 15.5 hours, longest over 26 hours. Vietor does a good job with narration, although the uniqueness of male voices is problematic. Most significant, you’ll have little difficulty determining who-says-what-to-who. Tempo and pacing fine, albeit the narration is a bit slow for my taste, bumped it to 1.25.

The entire series is a broad spectrum history of the United States from just pre-Revolutionary War through the 1890s and a chronicle of the Kent family through this time. Beginning with Phillip through the generations to the children of Gideon, a great-great-grandson. Members of the clan fight in the Revolutionary War, the War of 1812, the Civil War, are at the Alamo, the California Gold Rush, the Great Chicago Fire, the Johnstown Flood, and much more. The author skillfully intersperses vignettes of imagined and factual history. For example, two of the fictional characters of the series are sheltered for a few days at the home of the Lincolns in rural Kentucky - a baby is part of the family, young Abraham. One of the fictional characters is counseled by Benjamin Franklin. Fiction, Phillip’s childhood friend is Marquis deLafayette, non-fiction: deLafayette’s role in United States and French military. The series is rife with this type of paradigm, but it is not difficult to determine what is true and what is fiction. All the instances that involve the Kents and John Jake’s other fictional characters are products of his imagination. Much of the rest is a fun methodology of conveying historical events.

The stories are very listenable. I found no need to re-wind or fast-forward; no segment boring or irrelevant. Theses books are not ‘love stories’ in the typical sense, albeit familial relationships, the crux of The Kent Family Chronicles, must include love stories, n'est-ce pas? In those areas where a sexual encounter is defined it is relevant to the plot and tastefully written. This does not occur often, but the clan does proliferate :-). A word to the prudish: there are a couple of rapes vividly described.

Very typical of the time written, the 1970s, writing is a bit verbose. Several of these books were adapted for television mini-series, popular at the time.

The Kent Family chronicles just keep getting better! So good. Can’t wait to listen to the next one. Never want them to end!

Would you consider the audio edition of The Titans to be better than the print version?

BOOK: (Amazon Summary) The members of the Kent family’s most dynamic generation face internal clashes as the Civil War ignites

In the hellish years of the Civil War, the Kent family faces its greatest trials yet. Louis, the devious son of the late Amanda Kent, is in control of the dynasty—and of its seemingly inevitable collapse. His cousin Jephtha Kent, meanwhile, backs the abolitionist cause, while his sons remain devoted Southerners. As the country fractures around the Kents, John Jakes introduces characters that include some of the most famous Americans of this defining era. Spanning the full breadth of the Civil War—from the brutal frontlines in the South to the political tangle in Washington—The Titans chronicles two struggles for identity: the country’s and the Kents’.

NARRATION: Marc Vietor narrates the entire series which is a plus. I like the consistency of hearing the same voice throughout the story line. The voices are well done, female and male are easily distinguishable.

you might enjoy if you liked the rest. this wasn't Up to the expectations of usual.

Would you listen to The Titans again? Why?

Well it's a in long book, so probably once is enough, but I am absolutely recommending it

Everything, he is truly superb at his craft