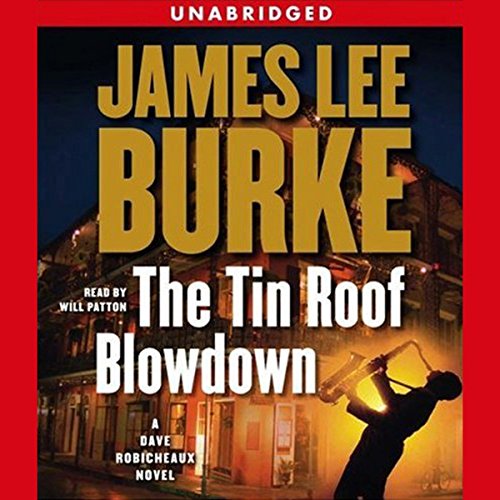 Winner of the 2008 Audie Award for Mystery

Dave Robicheaux returns in another Bayou adventure, this one more gruesome and gut-wrenching than any that have come before. Hurricane Katrina has ravaged New Orleans, leaving the streets and buildings flooded and the city awash with opportunists, looters, and vicious criminals. There is no order, no law. Police are shooting randomly at innocent people, prison guards have abandoned their posts, bodies float through the streets and hang from trees, and every drug dealer, murderer, and rapist is out taking advantage of the desperate lawlessness that holds the city captive.

In the midst of it all is Robicheaux, doing his best to help regulate the post-Katrina madness, all the while on a dogged search for a pair of dangerous fugitives, a dope-addicted, fallen priest, and a vigilante insurance salesman who takes his family's protection too far. This promises to be the most taxing and emotional case Robicheaux has had to work.

In his singular style, which defies genre, James Lee Burke has created a haunting picture of life in New Orleans after Katrina. Filled with complex characters and vivid descriptions of the destruction and death that gripped the Big Easy, The Tin Roof Blowdown is an action-packed crime thriller as well as a poignant story of what disaster and desperation can do to people.

"Meticulously textured....dense, rich prose that draws the reader into a web of greed and violence." ( Publishers Weekly)

How Does One Manage?

This is the most horrifying description of post Katrina that I've read to date. The lush description of the beauty of New Orleans and Louisiana bayou country is gone, replaced by "bodies wrapped tight like mummies in the gray and brown detritus left by the receding waters." There were parts I had to close my eyes to listen to because the sense of place was so vivid and I couldn't stand what I was seeing.

The story is vintage Burke with a little bit of "is it mystical magic or not" thrown in amongst the good vs. evil that is the cross on which Burke hangs his stories. Burke's politics is more evident here than in other books, with Bush bashing, gratuitous remarks about Fox News, etc., all which jarringly interrupt the story's magic. But yet, the depth of Burke's anger at what happened in New Orleans, the failures and abandoment, certainly is well-grounded.

You can read the publisher's summary to get a feel for the story, but even if Burke was writing about the recipe for a fish stew, I'd read it and it would be wonderful.

There is not a writer alive today that can put you in the scene so completely - the smells, the sights, the scent of the breeze, the color of sunlight and shade, he's just wonderful.

This is a wonderful,achingly sad, and somewhat horrific story of how Burke mourns the City of New Orleans and what it once was.

A great book, as usual

I downloaded this as soon as it came out and it is great like all of his Dave Robicheaux books. Will Hutton is a superb reader and really captures the Southern voice with all of the subtleties of Dave's character -- and Clete Purcell is always entertaining.
I have never been disappointed by a Burke book and this is no exception.

Thankfully, I overcame my dread.

I bought this title solely based on audible reviews. I was hesitant because of the subject matter: perhaps suffering from post-Katrina overload, I wasn't sure how willing I was to relive this sorry, depressing American story. But, wow, what a surprise this book was.

Burke tells a ripping good detective story, and in it he seamlessly blends themes of familial love, the faithfulness of friends, and the desire for redemption, so that the book becomes much more than just another police procedural. And the most powerful aspect of the book is that at its core, it is a tragic love letter to a city on the verge of obliteration.

The storytelling is made all the better by a near perfect narration. Patton is subdued without being boring. He strikes the perfect tone for the material.

This was my first Dave Robicheaux novel. I felt that the characters were thrown at me, as if expecting that I knew the history behind them and relationships tying them together. Once I got past that, the story had me absolutely captivated. The characters are extremely complex and their actions, thoughts, hopes, and regrets are contemplated in great detail. The story is completely convincing. Many of the situations described during the survival-of-the-fittest events during Hurricane Katrina while absolutely gruesome and gut-wrenching are easy to believe. The description of post Katrina apocolypse gripped my heart with dispair. I cannot recommend this book enough.

I experienced Katrina firsthand, living on the north shore of Louisiana's Lake Maurepas which is just above New Orleans. James Lee Burke's descriptions of what happens both during and after Hurricane Katrina is so real, it was like having a flashback. Detective Dave Robicheaux, with the New Iberia Parish Sheriff's Office, and his sidekick, P.I. Clete Purcell, take us on a scary ride to New Orleans, tracking criminals and solving mysteries, during a time of darkness and chaos. We experience the drama of the fear and the courage it took to survive all of it. Burke also makes us aware that it took the efforts of many law enforcement agencies, medical personnel, and emergency power and clean-up crews to restore order to south Louisiana.

It was all Bush's fault.

Will Patton is a great narrator. The story line held up and I think I might have enjoyed this book if I was a lefty. As the story progressed the author would go into numerous 5 minute rants about how the federal government (namely Bush) did nothing. The federal government had nothing to do with where these people built their city. The federal government had nothing to do with the years of corruption on a state and local level that led to nothing being done about the inadequate sea walls. Responsibility for public safety first lies on a local level, then state. Anyway if you are politically ignorant, liberal or part of the "Blame America 1st Crowd" (by the way all three are synonymous) then by all means, you will enjoy all aspects of this book.

worth every star for its genre

The reader is superb, his character voiceings impeccable and highly distinct from one another thereby presenting the literary skills of Mr. Burke at their highest level. This author's facility with our language is impressive and very much adds to the enjoyment of the book. Burke's phrasing, similes and metaphors paint mind images as tangible as the recollection of a personally perceived sensory experience. The timeline and place of the story, New Orleans during and post Katrina, is not only highly entertaining, but veridical and very educational as well. There is something about well researched fiction that makes learning so much more interesting than the other literary styles, perhaps because the education obtained is incidental and therefore somehow feels experienced.... as if you had actually been there. I could not recommend this book more to those who enjoy fiction for both entertainment and education. There are a few authors (Orson Scott Card and Nelson Demille in Upcountry) and James Lee Burke who should be mandatory reading for anyone wanting to be a wordsmith.

Not great, not bad

I downloaded this because it was listed as one of the best books and had so many positive reviews here...I wasn't entirely let down, but I also wasn't as thrilled as others. The narration was good and the characters voices seem to fit them well. Overall, just not a great, "must read" in my opinion. Something that passed the time well enough to deserve some praise, but not enough for anymore stars.

I don't get it

Usually the books of the year chosen by the Audible editors are pretty good...I really can't understand why this one won the best book of 2007. I found it to be boring, full of cliches, and unbelievable characters. The only redeeming factor was Will Patton's narration.
Stay away.

Yes, there is a sameness to Burke's Robicheaux novels. But that's what I like about them. Over the years, I have come to know and care for Dave, Clete, Alifair, and all the other regulars, and the new and intricately-drawn characters that populate Dave's world. Why would one want to skip Dave's ruminations, reflections, and insights? Those are the things that make these novels more than just chase scenes, gun battles, and easily-solved mysteries. Every character, from victim to perpetrator, innocent or guilty, is much more than a one-dimensional "good guy" or "bad guy." And Burke's insights about the Katrina disaster, its aftermath, and the long-range effects were interesting and heart-breaking to anyone who has a love for New Orleans and its unique culture and people. I was sorry to have this one end, and look forward to my next visit to New Iberia.