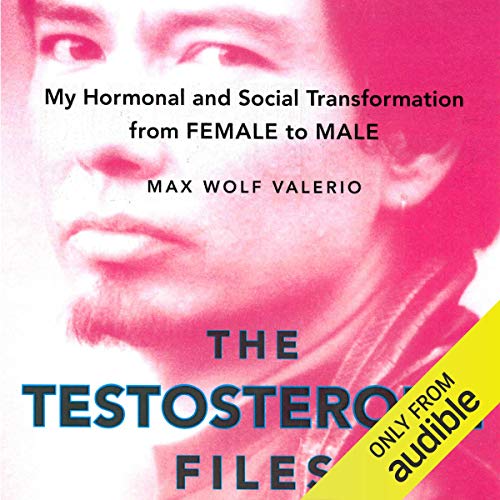 Max Wolf Valerio crafts a raw, gripping, and poetic account of life before, during, and after injecting testosterone. Valerio's detailed observations about a lesbian transitioning from female to a heterosexual male highlights the physical and emotional differences between women and men, and alternately challenges and confirms readers' assumptions about gender.

The Testosterone Files addresses the most fundamental issues of transitioning, from buying men's underwear to choosing a male name, as well as the profound subjects of male privilege, physical power, and existing as a male who was once distrustful and critical of men's intentions.

Valerio's honest and forthcoming opinions on gender, identity, and self-perception comprise the core of this intensely personal and absorbing narrative which grapples with the tough and complex issues that emerge in a world whose assumptions about gender binaries are being increasingly challenged as more people openly self-define across the gender spectrum.

His story comes across as a thing of wonder.

With an adventurer's spirit, Max writes of actually living out his childhood fantasies, of going covertly behind enemy lines, of donating his body to science. Not a tale of feeling lost and in the wrong body, but of being a revolutionary and an explorer finding alternative ways of being.

This is a book for all independent spirits and lovers of powerful, poetic writing.

Interesting, engaging and overall great storytelling. The author did an overall well job!
Kudos for the great pace and narration style

As a trans man myself, I didn't enjoy this book one bit. The author expresses old, misogynistic, sexist opinions that I don't agree with. He's a trans man yet has the audacity to decide for others that there is only binary and that anything else is just chasing euphoria. He blames all his emotions and creepy, stalkery, rapey behaviour on hormones ie testosterone. Which is incredibly misinformed. Testosterone doesn't suddenly turn you into an aggressive person who gets a thrill when women gets scared when your walking behind them late at night.

The narration is... too much. It's exhausting listening to him. I don't particularly like poetry, even less do I enjoy hearing someone read it.

This book might have been all the rage when it was first written, but it hasn't aged well at all. Books like these does nothing for the trans community. Especially not today with all the misinformation and transphobia going around.

Max Valerio provides a peek behind the hidden curtain of the female to male transsexual to share his personal journey. I find myself laughing outloud listening to the tales of his sexual adventures. I read the book 15 years ago, when starting out on my own medical transition, but this time I am gleaning new insights. Bravo Max!

What could Max W. Valerio have done to make this a more enjoyable book for you?

I think maybe I just don't like his personality or approach to life.

I found his voice really irritating or annoying, as though he was trying to portray the coarse half-hung over sex-driven bar fly that is the worst mono-dimensional stereotype of what men can be. It didn't sound like a natural voice, but like someone faking it.

It does portray a strong point of view.

This book is at the same time boring and troubling. The author tells of a journey of self-hatred in which she finds traces of what she identifies as male qualities, such as aggressiveness and a desire to hurt and dominate women, in her early history and then cultivates the very traits she found objectionable, in what almost seems to be a self-challenging show of bravo, until they become her identity. What she becomes is nothing like any man Ive known, but someone acting out the worst most superficial stereotype imaginable. There were many sex scenes, but they were dull and boastful rather than erotic. I had hoped that the book would give insight into the reality of men from the perspective of someone who'd experienced both sets of hormones, but it seems clear that this author doesn't like men very much, even though she opted to become one, and therefore can't portray their reality in an engaging way. It somewhat reminds me of stories about Amish youth who take a year to see how the rest of us live, but get into trouble because they assume life outside the church consists of constant debauchery: The story of that year makes you feel sad for the individuals involved, but doesn't tell one much of what the non-Amish world is like. Likewise, this book doesn't tell me what its like to be a man from a special perspective of someone who can talk to me as a woman or give me insight into an experience broader than this author's own dogma. I will confess, the book became too tedious and repetitive and I ended up deleting it after finishing only about a quarter.