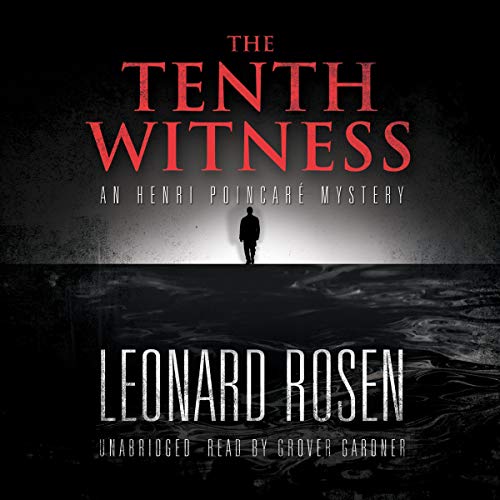 The Tenth Witness,a prequel to the award-winning All Cry Chaos, is the tale of a man upended: a 28-year-old who rejects a brilliant career in engineering for a dark, uncertain one in international police work.

On the night of October 9, 1799, the frigate HMS Lutine broke apart on the shoals of the Frisian Islands off the Dutch coast. When the insurer Lloyds of London paid on the wreck, it took ownership and planned expeditions to recoup the lost millions in gold and silver. Nearly 200 years later, after a series of largely failed salvage operations, Lloyds tries again - this time on the strength of new technologies and a strategy devised by the gifted young engineer Henri Poincaré.

It is late spring 1978, and Poincaré has worked nearly to exhaustion preparing for the Lutine dive. Before the salvage season begins, however, he takes a rare holiday: a hike at low tide across the vast, muddy flats of the Wadden Sea. His guide is Liesel Kraus, who is smart, able, appealing - and troubled. She and her brother Anselm are haunted by a violent history that generates both rage and, as the directors of Kraus Steel, an enormous, corrupting wealth. The closer Poincaré draws to Liesel and Anselm, the more warped life becomes until, finally, love and a death threat compel him to investigate what no one else will - aside from Interpol. It seems that pain as well as treasure can be dredged up from the past to reshape the present.

This prequel better than sequel.

Although written later than "All Cry Choas," it actually takes place earlier. This fills in some gaps in the character of Henri Poincare, great-grandson of his famous namesake, and is an even better story than the other. Although there is much to be appreciated about the plot, the story sort of falls apart at the end. Nobody could behave as naively as does our hero who nearly gets himself killed (again.) Also, his German girl friend does an about-face that seemed somewhat out of character, but, I suppose, blood runs deep.

This was a difficult story to turn off. Grover Gardner is easy to listen to and Leonard Rosen has created a character, Poincare, who is nuanced, human, fallible, and easy to care about. He has a terrific backstory tied up in mid twentieth century Europe and if you like history, other cultures and plot lines that require a little thought on the part of the reader, you will enjoy this as much as I did.

I listened to this after having read his other novel, "All Cry Chaos", which is set later in Poincare's life and is five stars all around. Normally I am skeptical of prequels but I was not disappointed here. I think the author boxed himself in a little because he developed such a great character but started him so late in his career. I guess Rosen didn't get the memo from most American authors today about how to squeeze every penny out of an idea. I hope he finds a way to bring us more of the Inspector.

I confess I can't review this book in isolation. My reaction to it is colored by Rosen's first book which I so thoroughly enjoyed. What I found so interesting by "All Cry Chaos" was it's interweaving of two genres (mystery and chaos theory). This brilliant combining of mystery and science is missing here and is probably the cause of my disappointment.

In truth, The Tenth Witness is probably an ok book in its own right: the predictable story of Nazi war crimes and their lingering legacy. Indeed, the historical aspect presented here was one part of the book I did enjoy. However, for the first few chapters I was totally lost. The only connection to Cry Chaos was Henri himself but as an almost altogether different character. Perhaps I missed it but I can recall nothing in the first book that refers to his start as an engineer.

The characters are new and the storyline so disconnected from All Cry Chaos I struggled to find a context. I think Rosen would have been better served to continue from where his first book left off so as to further ground Henri's character and include references and hints to his past before Interpol. Then a journey into the past could be more smoothly accomplished.

However, if you can come to this book afresh, without the burden of high expectations placed by the first, or better, without listening to the first, you may find this an enjoyable ride.

I did read the first book when it came out, so this prequel was not my first introduction to Henri. I have to admit I was lost at the start of the book because it was very difficult to bring my head back to Henri's past when it was so different from the present day story I had liked so much. Normally I don't like historical fiction, and this book did brush right along the edge of that (i.e. Nazi war crimes)... I read fiction for escapes from reality, not to recap the horrendous activities humans have gotten up to in the past. And I like justice that is meaningful (i.e. the bad guys get their just desserts asap after they commit their crimes)... in fact, I like vigilante justice where bad guys get their just desserts immediately. To read about Nazi crimes where most of the murderers got away and/or were brought to justice after they had lived the better parts of their lives free, is just not as satisfying. So they convict an 80 year old of war crimes - so what, he already lived the best part of his life off the backs of the people he murdered.

Okay, okay... rant over... anyway, it was a good story and I like Henri's character. It is not as action filled as I normally like, but Henri is pretty noir and the story is interesting. I hope the next in the series is more like the first book than this prequel though...

The narration is very good but I think that Gardner's voice does take a bit of getting used to. There isn't anything graphic in the book, and I will read more in this series.

Well-crafted prequel to All Cry Chaos

An interesting weaving of history, science, engineering and fiction gives us the basis for Henri P. His moral compass and intellect are clearly intact yet he is a bit naïve at times, which is to be expected of a young man. Looking forward to more cases involving Henri P.

Fiction but based on true history. A real eye opener. I hope he continues with Poincare' series. I like this character very much. Grover Gardner has become my 2nd favorite narrator.