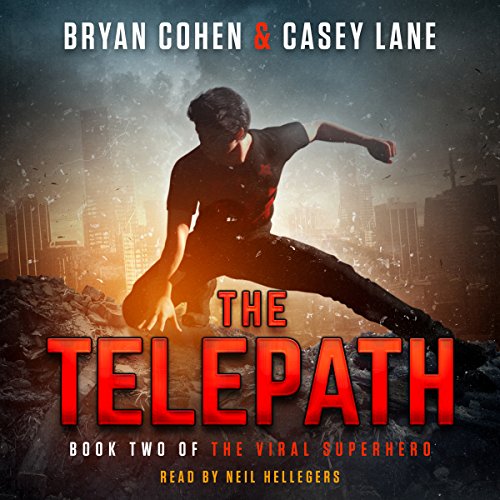 Can a teenage superhero stop a mind-controlling menace with a vengeance?

Newly-empowered superhero Ted Finley wishes he could spend all his time fighting crime. But between recruitment offers from the federal government and the growing Go Home Alien movement, Ted’s being pulled in a million directions at once. Fortunately for him, he’s got a protector and dream girl in the form of Erica LaPlante. If only she wasn’t keeping secrets from him.

As Ted, Erica, and the rest of the team cope with the fallout from their battle against the dark souls, a new evil descends on the town with the ability to control what they think, see, and feel. Erica’s secrets may hold the key to winning the battle but revealing them could sacrifice the war…

The Telepath is the second novel in the thrilling Viral Superhero Series. If you like breathtaking action, laugh-out-loud humor, and a hint of romance, then you’ll love Bryan Cohen & Casey Lane’s edge-of-your-seat story.

This book is an edited and revamped new edition of a novel that was previously published as Mind Over Easy.

Buy The Telepath to continue the super-powered series today!

Awesome addition to the Viral Superheroes

Great narration performance again. This story just flew by in a good way. Plenty of action. Love the interactions between Ted and Erica. This series doesn’t disappoint! Looking forward to the next installment in the series!

Loved this book, and how the story was told. Impossible not to listen to only once.