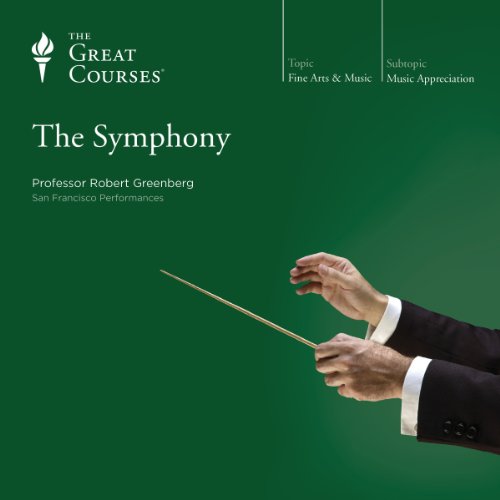 From its humble beginnings in the 17th-century Italian opera overture and the Baroque ripieno concerto, the symphony has evolved into one of the longest lived, and perhaps the most expressively inclusive, genres of instrumental music. Along the way, it has embraced nearly every trend to be found in Western concert music.

In this series of twenty-four 45-minute lectures, Professor Greenberg guides you on a survey of the symphony. You'll listen to selections from the greatest symphonies by many of the greatest composers of the past 300 years. You'll also hear selections from some overlooked works that, undeservedly, have been forgotten by contemporary audiences.

Your tour of the symphony includes

The course concludes with an investigation of Dmitri Shostakovich's Tenth Symphony, which became, in Professor Greenberg's words, "a model for what the new, post-Stalin Soviet music might aspire to be-a more personally expressive, less explicitly programmatic work, one that both engaged and challenged its listeners."

Another wonderful series from Robert Greenberg

I'm a big fan of Robert Greenberg's lectures on music.  The Housemate and I are watching How to Listen to and Understand Great Music, and I've finished his series on J. S. Bach, and -- my personal favorite -- Music as a Mirror of History.  As with the latter, this course on symphonies shows us that Professor Greenberg is not just astonishingly well-versed in music, but that he has a remarkable ability to contextualize that music, allowing the listener to understand the influences that helped to create, in this case, individual pieces of work, but in the case of the more general surveys, the entire oeuvre of the composers he covers.  A good example, for me anyway, is how Shostakovich, who has never been a big favorite of mine, is put into the context of the composer's life in Soviet Russia, under Stalin (an unenviable position for any artist) and has now become both accessible to me, and someone I actively want to listen to.

I never listen to a Greenberg course without finding that there is some composer or piece of music that now speaks to me where before he/it felt like so much noise.  In this survey I came to a greater understanding of Bruckner, a composer I'd sorta enjoyed, but never cared enough to explore more deeply, and discovered that I actually like the music of Charles Ives, Roy Harris, and Samuel Barber.  Sadly, even Robert Greenberg hasn't been able to make Hector Berlioz remotely interesting to me. *yawn*

If there is a weakness it grows out of the limitations of the course.  There are simply too many symphonies and too many symphonic composers to cover in-depth in any such course.  So much has to be edited out, or reduced to a mere mention that it's frustrating to think about how much more we could be learning if there was simply more time.  If I could offer a suggestion to the good professor, I would say, please give us a lecture series on more contemporary composers.  I want to learn about (just off the top of my head) Henry Cowell, Heitor Villa-Lobos, Joseph Becker, and David Diamond, as well as William Grant Still, and yes, more Shostakovich please!  More insight into their work and influences would be appreciated.

If you love classical music, but feel you want to understand more about it, and come to a deeper appreciation of the forces which shape it, you can't do much better than listen to Professor Greenberg.

Greenberg is a superb lecturer who presents the symphony across the centuries in an electrifying and edifying manner. He brings each composer and his work to life. There are composers of whom I had never heard and I am better off now. But for even the familiar ones I have a deeper appreciation.

Around the world and through time. . .

What made the experience of listening to The Symphony the most enjoyable?

I am stunned by the works I have listened to and enjoyed. Even more I am amazed that I have searched and found the Turangalila Symphony and plan to use Dr. G’s lecture to study it. I already like parts of it, but the other parts confuse me or irritate me (but in an interesting way). I think that’s what I appreciate most about this particular course—now I can listen to music and say “I like that” or “I’d like to hear that again” or “That one is still beyond me.” I have three options instead of just “I like it” or “No, no, no!”

this is my third music appreciation course with Professor Greenberg, and I always learn a ton. I highly recommend this course and I feel like I've really learned how to deepen my appreciation of the symphony.

This is, without a doubt, the most fun audio presentation I've ever had the pleasure of listening to! Understanding what was so great about Beethoven, what Mozart's peers thought of him, what persecution Shostakovich went through in Stalin's Russia makes the music so much richer. Learning was never this interesting when I was in school! Professor Greenberg is more than a captivating narrator, he is a one-man show. I must find more courses by him, no matter the subject!

As a musician, I may be a bit biased to music courses, but Ibhave to say, Robert Greenberg ita the best audio-lecturer/audiobook reader. He's very engaging, which is helpful for audio. This particular course is a good skeletal evolution of the symphony. it's by no means complete (although none could be) but gives a great foundation to steer the listener in directions of further avenues to discover.

Let me say first I am a fan of Professor Greenberg. This is not my first rodeo, I have listened to his How To Listen To And Appreciate Great Music perhaps 20 years ago, his Opera series, his Bach, and Great Masters (Mozart, Brahms, Shostakovich etc) and I have enjoyed them all. Something about this series seemed important and rather intimidating. I used to be more interested in Big Music (symphonies etc.) when I was young. Now that I’m a little older (67) I listen more to chamber music and small group jazz, stuff I can actually hear and which sounds good in a room the size I am listening in ( not a concert hall, e.g.). I thought I should listen to listen to Greenberg’s “Symphonies”, I bought it, I wanted to listen to it; it sat in my library for two years, and now I finally listened to it. BOY WAS I WRONG, THIS WAS GREAT!
Professor Greenberg is a wonder, a musician with an extraordinary ear and a gift for explaining to the rest of us in words what it is he is hearing. Okay, after he is done I don’t hear it all as clearly as he does but I hear it better, I feel like I’m in on it, like I get it, like I enjoy hearing it more and I know where to go to find more really great music. This symphony series is now maybe my favorite. He had to exclude a lot of wonderful music, he was very respectful and deferential to many composers, and yet his delight and intelligent awe for some composers shone through in an infectious way. It’s more fun to listen now to Haydn, I hear his music better. I have looked up and listened to additional music from composers like Roy Harris and Howard Hanson, wonderful stuff I did not know existed. I listened again to perhaps the greatest composer of the 20th century, Shostakovich; and his dazzling, spine-tingling and heartbreaking music. I am again grateful to Professor Greenberg for helping me to find this stuff. Listen to this series. It gives you a sense of what has been really new and creative, of music in history,of the way music and culture have changed together,. After you listen to this you will know more, and hear more, worth knowing and hearing now, and in a hundred years. Thank you, Professor Greenberg.

Professor Greenberg teaches us wonderfully about the best symphonies and symphonists of the history of music.

Excellent and very interesting information! Fun, enthusiastic lecturer! Now to listen again and try to memorize it all!

Professor Greenberg doesn't excellent job of surveying the symphony over a three century arc. At times, he is a bit over-the-top, but this also keeps it interesting.

Well to understand, but somewhat too short

a great review, but I wished more information and in-depth reviews. But: As the author repeatedly said, it just could not fit into one course. so I will embark on other courses with pleasure.