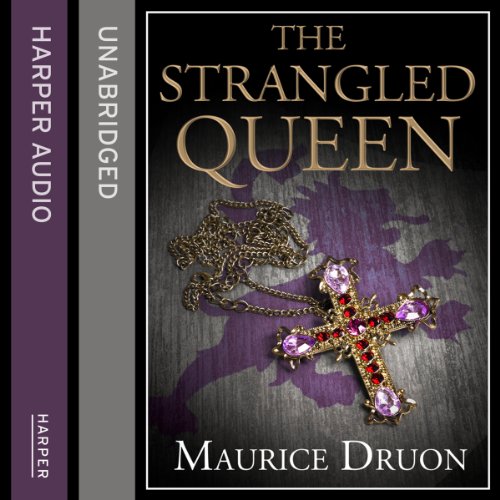 From the publishers that brought you A Game of Thrones comes the series that inspired George R.R. Martin’s epic work.

The King is dead. Long live the King. With King Philip IV dead, and the Kingdom left in disarray, as the fatal curse of the Templars plagues the royal house of France. Imprisoned in Chateau Gaillard, Marguerite of Burgundy has fallen into disgrace. Her infidelity has left her estranged husband, Louis X King of France, with neither heir nor wife.

The web of scandal, murder and intrigue that once wove itself around the Iron King continues to afflict his descendants, as the destruction of his dynasty continues at the hands of fate.

"Dramatic and colourful as a Dumas romance but stiffened by historical accuracy and political insight" ( The Sunday Times)
"Barbaric, sensual, teeming with life, based in wide reading and sound scholarship…among the best historical novels" ( The Times Literary Supplement)

More Of The Same, But The Same Is Good

What did you love best about The Strangled Queen?

That everything that was solid in The Iron King continued to be solid here. It has the same tone, characterization, prose style, etc. Going from that book to this one is less like ending a novel and more like ending a chapter then flipping the page.

As far as this specific book is concerned, I liked how it drove home how very second-rate Louis the Hutin's court is compared to the way Phillip The Fair ran things. Phillip could be cruel, but Louis is just as cruel and much more bumbling.

That it's every bit as good as it was in the first book. Peter Joyce is an excellent reader.

Several. Druon turns in good moments here like he did the first book. Robert's meetings with Marguerite stand out, as well as one doomed character's musings on how we create our own downfalls.

It occurred to me while I was listening to this that the worldview expressed here is very much similar to that of François de La Rochefoucauld's famous maxims. I wouldn't be surprised if Druon read a couple pages each day before sitting down to his typewriter.

Just can't get into these books.

I don't know what it is about these books, but I just can't get into them. I gave it two full books, one and two in the series, but I'm now moving on to something else. I've been reading with WhisperSync going between the Kindle and Audible books. The narrator is good, the story is ok, but there's just something about them that make it hard to keep my attention. I'm probably the minority in this aspect, I relize that. Can't say I didn't try to like them though, two full books finished. Maybe I'll come back later, but for now I'm just bored stiff with them.

Maurice druon does it again

hooked on this series. what a talent for dramatic irony. the author grips your attention through the book through compelling story-telling convincing dialogue and drama. Truly one of the greatest sages of his time.

Probably my favorite of the series

Though The Royal Succession is also quite good. Maringny’s rumination on public service at the end is worth the price of admission by itself.

The Iron king was the type of book that was hard to put down.

The iron king was the type of book that was hard to put down. Strangled Queen was great, but did not reach the same episodic binge craving that iron king did. The ending also had me feeling to satisfied. While I will be reading the next book in this series it will not be soon.

It is as good if not better than the first book. That this is non-fictional detracts nothing from the intriguing and highly entertaining stories that intertwine throughout the 6 book narrative. Narrator excellent. Highly recommended.

Unfortunately the next book in the series is not available in the USA. Excellent writing and narration, but I would not have purchased this book had I known that audible only had licensed the first two of the series.

Like "The Iron King," this fine novel features profoundly real characters and the bitter but fascinating verity of historical reality.

Like running itno an old Friend on a sunny day.

Apologies in advance it's a little bit free form, I was just throwing it together and it got to be longer than I expected, hope its readable.

I read these books when I was younger, and I honestly was surprised to find them on here after many years not being released or being out of print these books were always hard to find in English. I know in both French and Russian they were very popular for many decades (and were recently made into mini-series with Gérard Depardieu in the role of the last Templar Grand Master Jacques de Molay).
Having listened to them now, I also have a whole new perspective of the Game of Throne books (another favorite), while these are very different genre the similarities between middle ages Europe and Westeros are amazing. I think the debt George RR Martin owes to historic fiction like this underlines a generation of writers for whom history was/is a source of inspiration.

The performance is solid four stars, the only person I can think would sound better is Roy Dotrice.

This Series focuses on the events leading up to the 100 year was and the end of Capetian dynasty of France. For most people that's not exciting I suppose, but if you need a fix for Westeros while George is taking his time, this can be a touch of methadone (minus dragons and elaborate banner descriptions).

Additional value of this genre it actually opens you up to experience history through actions and character traits of real historical personages, even if embellished for fiction.

This particular book shows the France at a time when the feudal system was being dismantles for the sake nation states. When visionary kings began to centralize their authority from the feudal lords and consolidate it by relying on commerce and rising middle classes.

Maurice Druon wasn't just a historian and writer but also a member of the French government and I think he brings much of his own perspective on power and role of personalities and motivations in the events that change the course of countries.

What made the experience of listening to The Strangled Queen the most enjoyable?

Just like the first book, this one also felt real with the added benefit of the back story from The Iron King.

The suspense, I had no idea what was going to happen (resisting the impulse of going to Wikipedia for historical spoilers) kept me on the edge of my seat … or actually tablet.

Two scenes, the meetings between Robert and the Queen at Chateau Gaillard, all kinds of emotion were expressed, anger, desire, hope, sadness, manipulation…. And even kindness.

True anxiety before the Queen dies, I felt every moment.

Can’t wait to see the characters again in Book 3, they now feel so familiar.