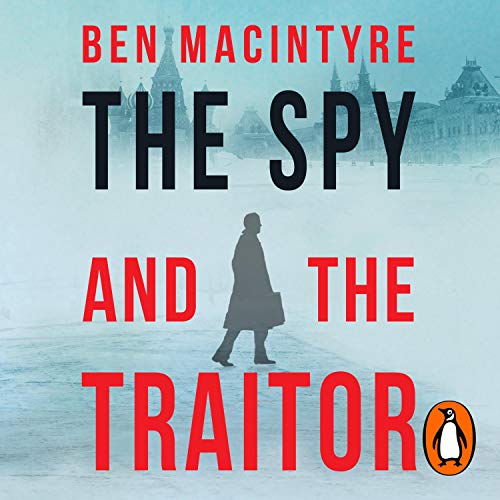 The Spy and the Traitor

Shortlisted for the 2018 Baillie Gifford Prize

A thrilling Cold War story about a KGB double agent, by one of Britain's greatest historians - now with a new afterword.

On a warm July evening in 1985, a middle-aged man stood on the pavement of a busy avenue in the heart of Moscow, holding a plastic carrier bag. In his grey suit and tie, he looked like any other Soviet citizen. The bag alone was mildly conspicuous, printed with the red logo of Safeway, the British supermarket.

The man was a spy. A senior KGB officer, for more than a decade he had supplied his British spymasters with a stream of priceless secrets from deep within the Soviet intelligence machine. No spy had done more to damage the KGB. The Safeway bag was a signal: to activate his escape plan to be smuggled out of Soviet Russia. So began one of the boldest and most extraordinary episodes in the history of spying. Ben Macintyre reveals a tale of espionage, betrayal and raw courage that changed the course of the Cold War forever....

"The best true spy story I have ever read." (John Le Carré)

Ben MacIntyre tells stories like no other. The writing is wonderful and the voice rich in tones

The audible equivalent of a book you can’t put down.
Gripping story. Well researched. The first book for a long time that I couldn’t wait to continue. Narrator does a great job with the Russian pronunciation as well. Simply enjoyable whilst informative.

Leave a beer capsule under the bench in the park

This book is as good as it gets when it comes to spy stories. It starts out strong – diving straight into the story – and then it just keeps going. I can be a drifter, but it was impossible to drift away while reading this book. It keeps the reader engaged at all times.

The protagonist is Oleg Gordievsky. A real person! Indeed, an actual former KGB spy who defected and joined MI6, becoming one of the most important spies in the cold war. If you like the show “The Americans” then you are almost guaranteed to enjoy this book as well. I particularly appreciated the descriptions of how spies communicate with one another. It can go something like this: If spy X leaves an orange peel under the right side of a bench in the southwest corner of some park, then that means that someone is onto him. But if instead, he leaves a blue chalk mark on a light pole on street Y in SOHO, that means that he wants to meet.

The descriptions of spy communication are both fascinating and humorous. Indeed, as one would expect it can sometimes become confusing such as when one spy was supposed to drop a beer capsule instead dropped a ginger beer capsule. After a lengthy discussion it was decided that the spy probably did not distinguish between ginger beer and real beer.

Nevertheless, there is a lot more to this book. You get insight into the political atmosphere in the 1980s, You will encounter politicians as well as spies. Yet, first and foremost, you get a top-notch cat and mouse spy chase. And the best thing is that the story is, as far as I can tell, entirely factual. The author makes it clear when he is speculating, which I appreciate. If you are at all into these types of books, then you can’t go wrong with this book

Excellent well written, capturing a story so important to recent modern history. How brave all the characters are, irrespective of where they stand politically. The fear and limited choices were well described and real. How fortunate to be born and raised in the west.

Fascinating and fantastical spy story made all the more gripping for being true! Made being stuck in motorway traffic a pleasure!

Brave man, who gave a lot, but lost out on family

Shows the influence , one man can have on East/West relations.
A more recent, well placed individual, could have had a positive effect on the current Ukrainian situation.

I have listened to this in it’s entirety three times. A brilliant Cold War espionage tale, brilliantly researched and never stops you being enthralled. If it was fiction, you simply wouldn’t believe it. As for the narration, the author Ben Macintyre knocks this one out of the park. I could listen to him reading the phone book ! Highly recommend !!!!

Probably the most interesting book I ever read

Superbly narrated, exciting story full of details about the KGB and MI6, must read! A+

The thread of the story is easy to follow and the book is well structured. It doesn't get bogged down in useless minutiae, the level of detail is just right.

Completely compelling, all the more so for being an account of real events. I don't always enjoy an author reading their own work, but this is perfect. Bravo.

Historically, the book may actually not reflect the real facts. Nonetheless, the storyline is interesting, structured and well read, and I enjoyed it. It intrigued me into futher research about the character and the particular period of time.

Great production with thorough historical research and Insider knowledge. Respectable and admirable author, who also performed his book convincingly. A good choice and very much worth it.

Macintyre's brilliant narration makes this an unputdownable work of non-fiction. But set yourself up for a re-read.

A non-fiction spy story written and narrated flawlessly. I have enjoyed every minute I listened to it.

MacIntyre's masterpiece... even though Oleg's story is incredible by itself the author had managed to finesse it in such a way the reader cannot put it down

Best and captivating story I have read / listen to ever. Highly recommended if you like real history espionage story's.

I have listened to a handful of books from Audible and I have enjoyed most of them. But I tried The Spy and the Traitor based on a recommendation based on my interests and I am glad I did. This is by far the most fascinating book I have tried on Audible. The narrator has a silky smooth voice and is a great story teller without being too animated. But the book itself is really fascinating. I have an hour long commute both to and from work, and normally my routine was to listen to podcasts on the way to work and catch up on the news and listen to an audiobook on the way home. This book disrupted the routine, I listened on both the way to work and on the way home, I also found more time to jog in the local park because I wanted to continue the story. This book is absolutely terrific. The characters come alive are sympathetic and/or apathetic, the intrigue is nail-biting and the pacing is perfect. I will definitely be checking out more of Ben Macintyre, this is definitely one I will not soon forget!

loved it! great details of spy life, KGB, MI6 and so much more. kept on my toes from start to end!

a great Story gripping to the very end, well read. sorry for short, but typed on a mobile phone.

i enjoyed this book a lot. It was like a Daniel Silva but real and taught a lot about the cold war.