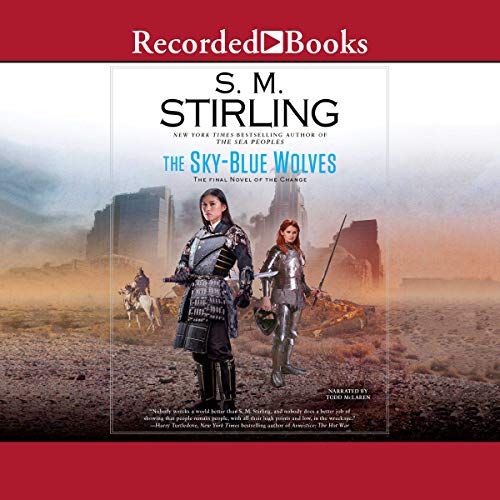 The epic conclusion to the New York Times best-selling Change series set in a turbulent post-apocalyptic world in which humans have rebuilt society after the collapse of advanced technology.

Two generations after the Change, Crown Princess Orlaith struggles to preserve the hard-won peace her father brought to Montival - the former Western US. But the Change opened many doors, and through them, powers strong, strange, and terrible walk once more among humankind.

With her fire-forged friend and ally Japanese Empress Reiko, Orlaith must take up her sword to stop the spread of the mad malignancy behind the Yellow Raja that has imprisoned her brother, Prince John.

From the emerging superpower of Mongolia, the Sky-Blue Wolves of the High Steppe ride once more beneath the banners of Genghis Khan - the thunder of their hooves resounding across a world in turmoil.

in as few words as possible, I will try to convey my disappointment. this series could have been 7-10 really amazing books, but instead has been watered down to 15 repetitive, repetitive, and dare I say repetitive books. the narrator has done his best but you can't polish a turd. well, technically you can but why...
I needed to know how it ended so I bought them all. I have since returned 2, and am considering trying to return them all.
will NOT be buying SM Sterling ever again if this is how it goes...
signed- too broke to afford bad entertainment

When I read the summary, and found out this was the last novel of the Change series, I had a feeling I would be disappointed, and I was. To not get any glimpse of the far-future of this universe was truly frustrating. More so, even, than the Island in the Sea of Time series conclusion. You could tell that the author was just “done” with this story and just wanted it over with.

not a good finish

he must have gotten tired of writing to end like that. I am still not sure what he happened to all of the characters

I have loved listening to all of The Change novels but this one felt kind of rushed. The cover of the book says that this is the final novel of The Change so I guess he's ready to move on. There was very little character development of the new characters and not a whole lot reasons why the existing characters acted the way that they do other than it was fated. An enjoyable read but the writer is obviously done and ready to move on .

What is S.M. Stirling thinking?

What is his editor thinking? I have to hand it to Todd McClaren, he gave a great reading of a terrible story. Just as in the Sea People: words words words that if were sold by the pound were worth millions, but it made this book a real labor. So back and forth the story goes as if anybody just picks up one of these books and reads it before all the others. Whatever he was trying to do with this book IT FAILED! and the ending REALLY? This is the last S.M. Stirling book I will ever purchase. And I own the complete series to date.

You know, for such a dynamic series where you can get wrapped up in character's lives, this conclusion was underwhelming.
Mr. Stirling owed it to this epic to write a better conclusion. Oh well, such a bummer

The finale chapter of a magnificent series.

It's always bittersweet when a story you've been reading for more than a decade can't to a close, but Stirling ends this one with a bang. I left wanting more.

wow an epic tale to be sure,

spell binding after a dozen or so books the story is still fresh and exciting, thr in depth thought into even the daily life of thr characters is mind boggling

Time for. The series to end, seemed a bit rushed over the second half of the book. But still a fitting end to a great series, but I still missed Rudy!
I