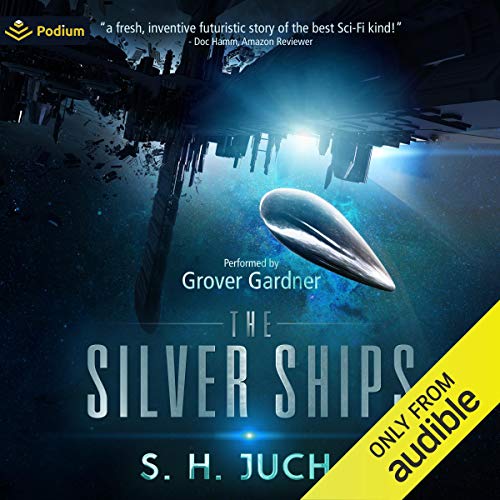 An explorer tug captain, Alex Racine detects a damaged alien craft drifting into the system. Recognizing a once-in-a-lifetime opportunity to make first contact, Alex pulls off a daring maneuver to latch on to the derelict. Alex discovers the ship was attacked by an unknown craft, the first of its kind ever encountered. The mysterious silver ship's attack was both instant and deadly.

What enfolds is a story of the descendants of two Earth colony ships, with very different histories, meeting 700 years after their founding and uniting to defend humanity from the silver ships.

Fun read. It was really nice to see people making smart decisions instead of doing stupid stuff to create additional drama in the narrative.

I found this book to be a combination of interesting plot and annoying propaganda, surrounding an unrealistically masterful protagonist. I am still trying to decide if I want to continue the series after 3 books. The series grows increasingly preachy about promoting socialist utopias versus corrupt and backwards capitalists. All capitalists are greedy, selfish, unmotivated, uneducated, lazy, stupid and ignorant. All socialists are enlightened, educated, motivated, giving, generous, incredibly innovative, and beautiful. (Ironic, all of the above...) The rhetoric becomes tedious and increasingly so, as you get deeper into the books.

Moreover, I find the protagonist began as a reasonably nice, intelligent person, but as the series progresses, he becomes incredibly arrogant, controlling, and domineering. Either the plot is making a point of showing the corruption of character, which I haven't delved deeply enough into the series to see as a plot point, or the author actually thinks this guy is cool. I think he has become rather revolting.

Undecided if I will finish the series. I am intrigued by the plot as a whole, but those objections above are making slogging through the series seem more of a chore than an enjoyable experience.

There's a simplicity and an innocence to the books in this series that reminds me of "Golden Age" science fiction. If you're looking for highly complex plotting, deep and intriguing character flaws, or science based explanations for things you're going to be disappointed. This a series for fun. The good guys are very very good. The bad guys are clearly defined. The technology is interestingly imaginative and entirely unexplained. It's a fun, predictable, good guys win kind of story.

Good story: humor, flow and plot; characterization and development. Wish there were a little more surprise in the plot and main character slightly less "superman."
Only a little though.

I wanted to like it, but the agenda ruined it

Regardless of whether or not I agree, I hate having anyone's political agenda thrown in my face so hard that I can't just ignore it. The Silver Ships has the hallmarks of being a very interesting, classically styled sci-fi story. But the author is unfortunately very heavy handed in his application of his political agenda throughout the book. He accomplishes it by suddenly demonstrating his agenda so heavily that one cannot simply ignore it and move on. And when he wraps up one agenda item, he saturates the story with another. Then he returns to the interesting story, pulls you into full attention, then hits you with more politically motivated content in such a way as, again, you can't just ignore it and move on.

I could make a list of the author's ideas that make up his agenda, but that doesn't make my point. I listen to books like this to escape society's current problems for a little while, not to be reminded of them by being repeatedly slapped in the face with them.

This could and should have been a enjoyable and interesting book. But in the end, I just couldn't wait for it to end so I could move onto something that actually allows me the fun and escape I'm looking for.

As for the narration, Grover Gardner delivers an admirable performance. He maintains a good pace and does a good job of fleshing out the characters. I probably would have skipped the last third of the book if his work didn't keep me going.

Flawed but worth the time

Any additional comments?
The book has a great start. The world the author creates is intriguing and pulls you in. I was reminded of Jack Vance and some of his books in which long separated human lineages evolved into radically different forms. The author introduces two very different human lineages with a set up for at least four more. That's the good. The bad, the flaws are numerous and take attention from enjoying the story. One is that the main characters have no flaws. None. They like each other, cooperate completely and always have a good time as they all happily work together to overcome the story hurdles. The two lineages have a fun time discovering the good points of each others wonderful cultures. Two the author has a two dimensional view of today's politics which he can't help but impose on his story and it feels heavy handed. Big government is best and is best suited to run society and the economy. Capitalism is bad, very bad and shameful. Conservatives it follows are very bad too and he makes sure that's understood by the reader. The good characters by the end of the book seem to be plodding methodically towards plot points.

Having pointed out those two negatives I admit that I liked the set up enough that I will probably listen to the next book in the series.

I wanted to like this book and listened to it two more hours beyond the point I decided I didn’t like it, which took me to the midpoint of the narration. The characters were not very deep and there was very little to like about them. Being attractive should not be the only trait that stands out. The protagonist was too good with only a thin attempt to give him a fault, which was then basically ignored.

The plot started out good but then got lost in boring details. There was not enough dramatic tension to move the story forward. What little tension was there was forced and preachy with a clear political agenda that completely turned me off. The projected socialist utopia was the most fictitious part of the story.

On the positive side, Grover Gardner is an excellent narrator.

I love this series, so far. The characters are interesting and their universe is exciting and promising for what comes next. It jas become a must purchase for me.

Not worth the time

I feel like someone is reading this to a child,
It is difficult to even listen to, the story is ok but the reader sounds like a kindergarten teacher

I have been trying to expand the number of authors of science fiction I read. I noted that Grover Gardner narrated this book. I have enjoyed books he has narrated so I decided to give the book a try.

Our protagonist is Alex Racine a tug boat captain in a mining colony. While heading home to New Terran, Alex discovers a derelict ship. He acquires it and boards the ship to discover the AI (artificial intelligence) on the ship is still active and it asks him to help restore the ship. When Alex gets the power back on line, he discovers the crew and passengers in stasis. Apparently, they have been in stasis for 70 years. It turns out they came from Earth also but are more advanced than the people from New Terran. They work together to restore technology and the ship while preparing to fight the aliens that destroyed the ship.

The book is well written but there is little action. I get the feeling the author is building the background for the series. I was interested enough that I will try the next book in the series. I did enjoy the book and the great voice of Grover Gardner.

The book is ten and a half hours long. Grover Gardner does an excellent job narrating the book. Gardner is an award-winning audiobook narrator.