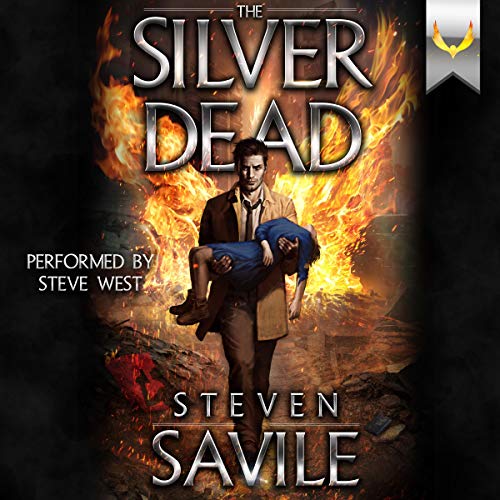 "Read it before the end of the world!" (Kevin J. Anderson, international best-selling author of the Dune Prequels)

When Temple wakes up in a filthy hotel, he doesn't remember a thing. Not how he got here. Not even his name. Temple just happened to be the first word he read on the bible sitting on the dusty nightstand.

When he discovers that he and all those around him are caught in the apocalyptic hellscape of a collapsing metropolis, he must carefully weigh the balance between charity and self-sacrifice as he sets out into this strange new world.

Grasping at a chance for purpose, he befriends young Nina. Someone to protect from the enumerable dangers and a glimmer of hope in his daunting quest for identity. He quickly learns protection is one of the few things he's made for, demonstrating vicious brutality against savages who seek to prey upon the weak.

Together, they search for anywhere truly safe to call home. A task made all the more impossible as they are chased at every turn by a plague of the shambling, silver-eyed undead.

The Walking Dead meets The Road in this dark post-apocalyptic tale with a supernatural twist, perfect for fans of Michael Crichton and Stephen King.

Now on Audible, narrated by the award-winning Steve West (Scythe, Interstellar Caveman). This book was formerly published under the title Immortal.

This caught me by surprise. A very dark Post Apocalyptic story, but in all the best ways! Definitely worth listening to. Steve West brings a certain gravitas to the authors twisted imagination, and it's a perfect combo.

Savile, I’ve come to realize, is a demented individual that creates harrowing art in his writing. If you’re looking for something Stephen King-esk, you’ve found it. Temple is a great character, but not for any of the reasons I usually think of characters as great. I would highly recommend this for Steve West’s performance alone!

I do not like apocalyptic, end of the world, dystopian stories, I don't like all the pain, suffering, torture, murder, and worse. They're just not for me. I only got this book because Aetheon Books gave me a code for a free copy and I have really enjoyed all of the other Aetheon books that I have listened to.
And now I am a big fan of author Steven Savile and narrator Steve West. Steven Savile's writing is detailed, immersive, and very fully developed. I could see, hear, and feel everything vividly in my mind. And Steve West's narration was amazing. The emotions in his voice made me feel all the main character's anger, frustration, dread, depression, elation, excitement, etc.
It started a bit slow, lots of descriptions and explanation about the world and the people, but the pace picked up quick and I got sucked in. The mystery deepened all the way through the story. Lots of surprises, lots of unexpected twists, and an emotional roller coaster.
I still don't like pain, suffering, torture, murder, and worse, but I do love a little excitement and a lot of mystery so I couldn't stop listening. I had to find out why this was happening and who was behind it.
I've added Steven Savile and Steve West to my favorites list and I'm looking forward to more from both of these guys.

I was given the book by the publisher. Narrator made this story very enjoyable. Characters were distinct and relatable. Post-Apocalyptic is not generally the type of story that I enjoy. This story captured my attention from the first paragraph and held it all the way through the end. At times I thought I was able to predict the way it was going, but I was wrong. I will definitely be looking for more titles from this author.

Somehow, "dark" just doesn't cover it, but that may be because you'll be blinded by the gorgeous prose and dazzled by how the story sometimes blurs past you. Over the many book's I've read/listened to, I've rarely stepped into one like this that does such a thorough job of hooking me from the first chapter. For grimdark fans, you'll have much to feast on here. A word of caution: abandon all hope ye who enter here.

This was an above average story and one well worth a credit. I enjoyed this mans journey from not knowing anything about himself to the discovery of who he was and who he became. The.narrator was so good that I am looking for other books he has done. Nice to have a story with an ending.

Understand that this review is based on personal opinion, and that your experience may vary.

If you want a depressing read, then look no further. The narrator did a great job of it, but his efforts alone were not enough to push this into a book I can honestly recommend to anyone. I've read books that have been depressing, but provided intellectual stimulus for deeper thought. Silver Dead didn't hit that mark, and as a result, this particular effort will be forgotten almost immediately.

His last book was satisfying. This one was lazy, full of plot holes and pointless at the end. I finished it to see what happened and was disappointed.

At the end , the whole storyline was pointless. Nothing was accomplished. This story had so much potential. It was a good idea. Don’t bother buying this one

this was a good listen, albeit extremely dark, overall a good book if you like this genre. thankfully it was not another zombie novel in disguise.

A Dark and Gripping Tale

This was a dark, gripping, tale that kept me guessing as to where this was going to end. Temple is a fascinating and tragic character and watching him as he tries to get his memories back makes for a thrilling ride. The narration was extremely well done. He had the perfect voice for Temple. This was a particular interesting book to listen to while quarantined at home during the COVID-19 pandemic that is happening in the world right now. Like I said this is a dark story, but it was very much engaging.