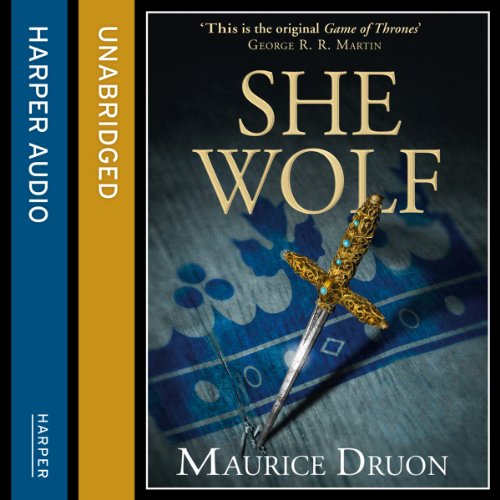 Charles IV is now king of France and his sister is Edward II of England’s Queen. Having been imprisoned by Edward as leader of the rebellious English barons, Roger Mortimer escapes to France, where he joins the war against the English Aquitaine. But it is his love affair with Isabella, the ‘She-Wolf of France’, who has come seemingly to negotiate a treaty of peace that seals his fate…

“This is the original Game of Thrones.” (George R.R. Martin)
"Blood-curdling tale of intrigue, murder, corruption and sexual passion" ( The Sunday Times)
"Dramatic and colourful as a Dumas romance but stiffened by historical accuracy and political insight" 9 The Sunday Times)
"Barbaric, sensual, teeming with life, based in wide reading and sound scholarship… among the best historical novel" ( The Times Literary Supplement)

And Now, For Something Different - England!

Would you listen to The She-Wolf again? Why?

Yes, but only if I'm marathoning the other books in the series. The Accursed Kings is great, but there is a certain undifferentiated quality from book to book.

If you liked books one through four, you'll probably like five. If not, you're probably didn't make it past two.

What was one of the most memorable moments of The She-Wolf?

Any of Druon's trademark scenes where a doomed character is confronted with the futility of their misspent lives and the transience of power. There was also a clever moment where a less-than-nice order is given via the ambiguities of Latin.

It's continued quality. I'm very fond of the sense of impending doom that he imparts to the prose.

This book differs from the last on two points, it's focused on England instead of France, and it starts after a time skip from the book before it. The other various qualities that make up a book's flavor are the same.

This version is lacking chapters

This audible version lacks the prologue and initial chapters. I noticed the discontinuity compared to the previous book in the series.

English History from the French Perspective

Would you consider the audio edition of The She-Wolf to be better than the print version?

For English history buffs (especially those who read T.B Costain's Plantagenet Series) this is an especially interesting book. While continuing the saga of the Capetian kings starting with Phillip the Fair, this book focuses on Isabella, his daughter who was wed to Edward II of England and the story of her love affair with Roger de Mortimer.

If you are familiar with the English view of Isabella, the She Wolf of France, then you must read this book as it gives another possible explanation for her many controversial decisions and actions.

Have you listened to any of Peter Joyce’s other performances before? How does this one compare?

Yes. He is always very good.

That this is non-fictional detracts nothing from the intriguing and highly entertaining stories that intertwine throughout the 6 book narrative. Narrator excellent. Highly recommended.

Each book is as good as the others

The narrator, whose voice can imitate many tones and accents makes the book even more enjoyable than reading it. The storyline is more twisted and fascinating than the best of novels. History can indeed be more fascinating than fiction.

A fun way to learn some French history