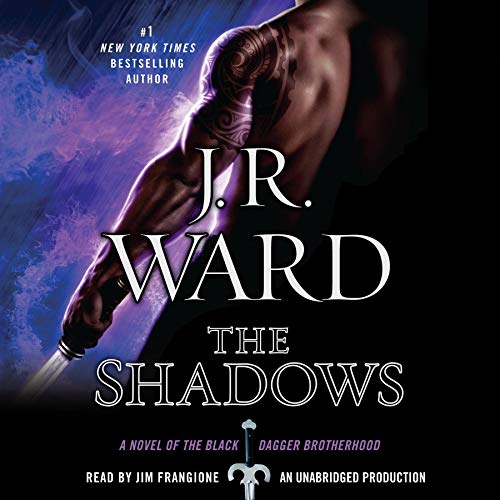 Those of you who have listened to Kim Harrison's The Hollows Series know what I mean. There's that ONE book in the series that you have to read because you can't listen.

Look, producers of audiobooks need to have the performers consult with the authors prior to recording. I have asked authors specifically about this, and the general consensus is that such interaction is discouraged, which I do not get, but some of them make contact anyway. I LOVE Jim Frangione, really. I LOVE The BDB. Having said that, I do not care if Xcor's name is "supposed" to be pronounced "Core." Seriously. I. DO. NOT. CARE. For several books, he has been "Score," and it is too late to change it. Xhex has been "Zex," and now she's "Hex?" Havers is now Havvers? And WTF, the PRImale is now the "Prim-ollie?" NO NO NO

EVEN IF these pronunciations are correct, per JR Ward, IT IS TOO LATE!!!! She should've said something 6 years ago. This isn't book 2 or 3. If JF and JRW had consulted in the beginning, Prim-ollie might not seem weird to me now, BUT THEY DIDN'T, AND IT DOES, AND CHANGING PRONUNCIATIONS IN THE THIRTEENTH BOOK IS NOT OK. I thought Prim-ollie must be Cormia's title as mate to the Primale. In fact, I spent so much time having internal "WHAT THE? WHY?" conversations that I had to back up regularly because I missed 5 minutes of dialogue here and there.

I LOVE this series. I have listened to every book repeatedly. I even relistened to the first 12 in anticipation of this 13th book coming out, AND I COULD BARELY GET THROUGH IT!! Bottom line: I don't think I CAN listen to this book again. So many pronunciation changes made it way too distracting. KILLS ME, but I think I'm actually returning it because right now I cannot imagine attempting to listen to it again, and usually, I can't wait to hear it again.

BAD DECISION, PENGUIN AUDIO. READ these reviews. How many reviews of the previous 12 audiobooks complained that the names were mispronounced? How many repeat customers are unhappy with the changes in this book? We aren't evil people bagging on the writer and narrator for fun. This was painful. Please, fix it in the next book. So frustrated and disappointed, I feel sick.

Maybe JF should have discuss the correct pronouction of name BEFORE starting with book 1, you just don't go and change 13 books into the series.

Get the names correct..... I don't care that in book 13 JF finely gets the name correct, MS Ward should have caught them in book 2 & 3 and made the correction then, now we know them as they were in the past books! I hated listening to this book for that reason, I felt I lost story time trying to figure out who the hell was Core?... WTH? There are many name flaws in this book, I also got the kindle version just so I could finish the book. Just bad business not listening to what you put out there before letting people make the purchase, and for this reason I'll be returning book 13 with a heavy heart.

What did you love best about The Shadows?

As with all of the BDB novels, the Shadows was well written giving enough backstory while not being bogged down in flashbacks. Finally! We find out why Rhev and the shadows have such a tie of loyalty!

There are elements to the story that will give you extreme reactions. Early in the story, there is a very disturbing scene, but I do believe that it was needed. (no spoilers here) The development of the relationship between Trez and Selena will bring you to tears as it reaches the end. But then again, I'm a weenie and it may be my own reaction. We've all been waiting for Selena and Trez to give in and admit that they were meant to be together.

I'm deeply surprised that Jim Frangione changed pronunciation of so many of the characters' names. Granted, he had probably changed how words were intended to be pronounced in earlier books, but continuity would have been nice. Havers was changed to Have-ers among others. I have listened to all of the books and the change now - after 12 previous installments - is jarring.

What was most disappointing about J.R. Ward’s story?

As much as I hate the stilted language of the Chosen and the BOB, its lack was noticeable. And Selena and Leyla using so much slang and profanity was off-putting. Its just too abrupt.

The narrator, after 13 books, decides to change his pronunciations of half the characters' names? This is so disruptive. I hate this. Whose dumb idea was this? And sometimes he seemed to forget when he was supposed to be speaking as a woman.

WTF is going on with the name changes?

Would you listen to The Shadows again? Why?

I am on the fence about listening to this audiobook again. I have the e-book and I think I will be using that next time.

I love the plots and the characters, and I am so into the series that nothing really upsets me about this latest book.

Did Jim Frangione do a good job differentiating all the characters? How?

Jim Frangione does an excellent job with this series. HOWEVER, the new pronunciation of established names was disturbing. If they were supposed to be that way from the beginning, why change them now? That ship sailed with Dark Lover. It was distracting to listen to these new names and it took away from the story because of this dissonance. AND, JF seemed a little off this time around as well. I did not pick up on the usual enthusiasm he brings to this series. Maybe the name changes threw him off his game? I know it bothered me to listen to that and feel like maybe JF was less than thrilled to be narrating this new book?

The last five or six chapters are the best. Catra is awesome.

I was more engaged by the Iam storyline than by the Trez/Selena one. I get the angst but at one point, it became almost overbearing. I kept muttering "enough already" with the tears and drama. And, Layla, how long is this poor woman going to be pregnant? Because ouch.

THEY ALWAYS SEEM TO BE OVER FAR TOO SOON

I'm a huge fan of the BDB and, if I can, I preorder new books then count the days, hours and minutes until I can download it and I'm always overjoyed with the listen..... until now. J R Ward skilfully packs a lot into her imaginative stories which are always great but with this listen she totally robbed me of the HEA that I thought would surely happen. As a romance lover, this left me torn as I was depressed, heartbroken and in tears for one of the Shadow Brothers which sadly overshadowed the HEA for the other. It takes a brave author to take the plot in the direction she took it.

Nevertheless, this is an all-consuming listen reuniting fans with old characters and introducing new ones. The overall plot moves along nicely with the Band of Brothers, the Lessers, the other character's loves and lives and the members of the BDB leaves you eager for the next fix in this awesome series.

Worth a credit? Yeah, a must have for any fan......as are all of J R WARD's other books. However, I don't know what happened to Jim Frangione's narration.... it was difficult to make out who was talking as there was no difference in voices and, at times, even the female voices sounded the same as the male voices. And, because there were many POV's spoken as the sub plots encompassed many characters, the lack of differences between voices really showed up this time.

In Defense of Jim Frangione

I haven’t yet finished the book (love it as always), but I need to defend Jim Frangione’s changes in the pronunciation of many names. HE IS ACTUALLY FINALLY PRONOUNCING THE CHARACTERS NAMES CORRECTLY!!! I’ve been to several of J.R. Ward’s book signing events and after hearing J.R. Ward discussing the characters, I realized that Jim Frangione has been saying many names incorrectly (if consistently) for the last 12 books. For example, Xcor is actually pronounced “Cor” and Xhex is “Hex.” I was overjoyed when I started reading The Shadows and realized all of the characters names were being spoken correctly and I appreciate that Jim Frangione has changed his pronunciation to accurately reflect how J.R. Ward intended for the names to sound. He has been an excellent and consistent narrator and he deserves far more credit than he’s been given in these reviews. That is all.

I've listened to ALL of the BDB books on audio so imagine my surprise when Jim Frangione changed the pronouncement of some of the main characters names. You would think that since he has narrated the entire series that he would be in tune with the previous books, characters and names......NOT! I'm wondering if J.R. Ward is aware of this? With that rant, the book is good...actually more than good....the narration through me off!

Someone who is a bigger fan of J.R. Ward may like this book better, but I was so disappointed I wanted to cry! The book was filled with more back story then a main storyline. It was hard to keep up with the back and fourth of different character stories. I re listened to "the king" book prior to this book coming out and I was still confused at times.

What could J.R. Ward have done to make this a more enjoyable book for you?

I buy romance books. This J. R. Ward book did not give me the HEA the other BDB books have. I cried because the story was sad and then cried because I didn't get the happy ending J. R. Ward has given before.

No complaints narrator is spot on as usual!

If you could play editor, what scene or scenes would you have cut from The Shadows?

I would focus on main couple instead of mixing 2 couples.

This is my second time listening to this book and I have to say I actually liked it a lot more this time around. The first time I was angry but this time I get it... i think. Trez & iAm's story is a very sad one with only 1/2 a happy ending. I did enjoying learning more about the shadows and I was glad they actually were the focus of this book. This book had some side stories but no so many that the main characters were cheated out of their book. I also love the lead up for the Legacy series in this book. I still think Selena's outcome could have been different but i'm not the author so I will just enjot th book for what it was.

Jim Frangione is perfect for the brotherhood but I have to say with this book the pronunciations for many of the characters names have changed. From what I hear, he has been pronouncing them wrong and was corrected now but sorry it's too late. You can't just change the way you say something 13 books in without it annoying the loyal listeners. And besides that, I liked his pronunciation so much better anyways.