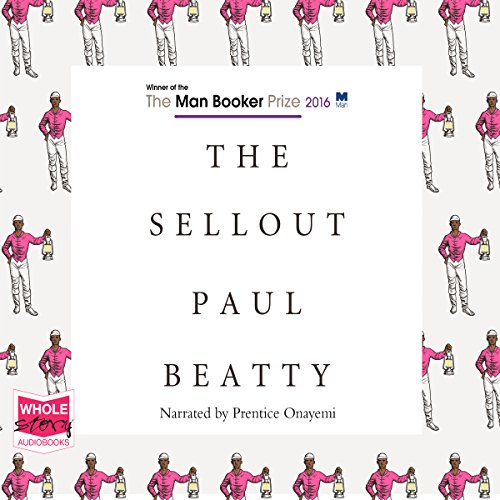 Winner of the 2016 Man Booker Prize for Fiction

Born in Dickens, Los Angeles, the narrator of The Sellout spent his childhood as the subject in his father's racially charged psychological studies. He is told that his father's memoir will solve their financial woes. But when his father is killed, he discovers there never was a memoir.

Fuelled by despair, he sets out to right this wrong with the most outrageous action conceivable: reinstating slavery and segregating the local high school, which lands him in the Supreme Court.

"Outrageous, hilarious and profound.... It takes a whole other level of sheer audacity to expose atrocious things through the play of wit.... Juiciness stains every lovely page of Beatty’s mad, marvellous, toothsome book." ( Financial Times)
"There's satire and then there's satire, and without question Paul Beatty's caustic third novel, The Sellout, definitely falls into the latter category...brutally honest and very funny." ( Independent)

Would you try another book from Paul Beatty and/or Prentice Onayemi?

What was most disappointing about Paul Beatty’s story?

A clever idea, perhaps a bit too clever. This book obviously convinced the MBP judges but not us.

What does Prentice Onayemi bring to the story that you wouldn’t experience if you just read the book?

Reading the Sellout confirms our decision never again to automatically go with a popular prize winner. I read two thirds (increasingly reluctantly) and very much wanted to finish the book but I could not read beyond the calf story in the playground, I had had enough. When we discussed the book at our meeting, it was reassuring to hear I hadn't missed anything significant. Living outside the USA, maybe we missed the point. My reading time is too precious for this style of book.

Boy, it must have been a rubbish year if this won the Man Booker prize. I found it a precocious, overly wordy, mish mash of thrown together ideas that goes nowhere. The kind of thing that your neighbours young daughter would bring home and you'd have to force yourself to say, "that's amazing honey", through gritted teeth. Or a first year uni students essay chock full of every idea and clever retort they'd learnt or heard. Trying too hard to impress. I got - what I thought was a third of the way through - when it suddenly ended! I thought I must have stopped the recording by mistake, but no, it just stops. Maybe Paul has been on too much of the weed he obviously thinks is so cool. Poor structure, no attempt at resolution of anything. Just a book full of oh so smart remarks.

Did Prentice Onayemi do a good job differentiating all the characters? How?

Admittedly a difficult book to read out loud. I did find all the mofo-ing and 'attitude' got in the way of the telling. As well as the ridiculously overly wordy nature of the book. Maybe it would work better read, rather than read out loud.

Maybe it just wasn't my cup of tea, not in the US (let alone L.A.). Some people obviously like it - but not me. I found the way it was written grating.

I really liked the book.
Interessingly it is received very differently by Americans/Europeans, people of color/white people (we discussed it in a book club and I urged some of my friends to read it).