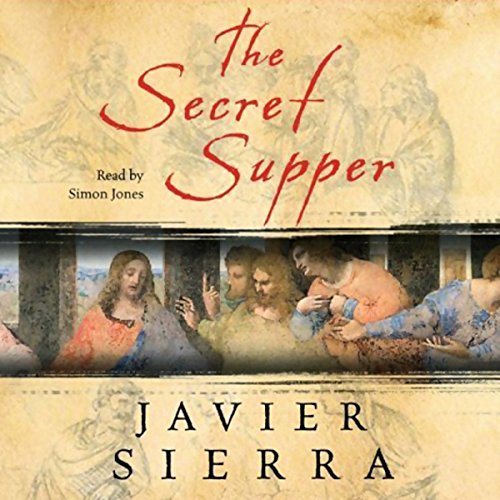 Tightly paced and atmospheric, The Secret Supper is a dazzling historical thriller with a unique vision of both Leonardo da Vinci's genius and his masterpiece, which you will never look at in the same way again.

Milan, 1497: Leonardo is completing "The Last Supper". Pope Alexander VI is determined to execute him after realizing that the painting contains clues to a baffling and blasphemous message that he is driven to decode. The Holy Grail and the Eucharistic Bread are missing, there is no meat on the table, and the apostles, shockingly, are portraits of well-known heretics and none of them are depicted with halos. And why has the artist painted himself into the scene with his back turned toward Jesus? The clues to Leonardo's greatest puzzle are right before your eyes.

"A fresh contribution to the da Vinci industry." ( Publishers Weekly)

It's a good read.. but not DaVinci Code 2

If you are expecting a Dan Brown type DaVinci Code book, this is not the book for you.

If you are looking for a book written from the view point from the time of DaVinci as he painted the Last Supper and what events MAY have influenced the great painter, then you will find this book interesting.

I found it very interesting as I like historical fiction. It is set in DaVinci's time, the story line surrounds Monks and Noblemen. The action is less physical and more entwined in innuendo and suspicions.

It's a good book for those who enjoy getting into the mind set of that long ago time. But I would NOT recommend it for someone looking for the standard Male/Female team running from the persistent gunman out to silence their hidden truth/deadly secret type of thing.

This book is more about what could have been and how it could have become that way, rather than a modern day unlocking an ancient truth hidden for centuries.

Depending on what you are expecting to get from this book, it will either be a very good read, or lack luster.

I was not expecting DaVinci Code part 2, and love historically based stories. Thus for me, this book was exactly what I wanted it to be. I am very happy with it.

If you are looking for Davinci Code II - this isn't it. BUT - if you are really interested in a glimpse of what may have been going on in the Great One's fabulous mind you will enjoy this book. Historical fiction that challenges the mind!

I didn't read or see Dan Brown's Da Vinci's Code so I was starting with an open mind. This is the type of book which captures you and makes you want to listen for a few minutes more each time you take time to listen. The beginning and ending fit together and leaves the listener wondering "could this really have happened as described?" Just a great listen.

What secrets did Leonardo Da Vinci place in the Last Supper? Is Da Vinci sending a message with what the apostels are doing or where they are sitting? Is it meaningful that there is no bread on the table? Why do two of the apostles have their back turned on Jesus? This book weaves a story around these issues and other specific items in the painting.

The story is told through the eyes of a Catholic priest who was sent to unravel a puzzle at the church where the Last Supper was being painted. In many instances, the clues exposed were clever and in many cases, the clues were so obscure as to be unbelievable even in a fiction novel.

Although I am a fan of this type of mystery, I found that the book was very slow moving. Also, for me it was difficult to follow as all of the names were Italian and there was a fair amont of latin used (not surprising as the story is set in Milan in a catholic church). However, I am a reader that likes to know how words are spelled and the complexity of the names and words were beyond my ability to guess the spellings from an audio book. At times, it was difficult to follow the story when several characters with uncommon italian names were involved in the story line at the same time. I had to relisten often to follow the story.

Also, it helped immensely to have a picture of the Last Supper while listening. Without the picture, it was difficult to follow or appreciate the clues being discussed and revealed.

All in all, it was a slow moving, but often clever story about intrigue within the catholic church and why and how Da Vinci exposed secrets. If you like this genre, you will likely enjoy this book, but if you are not a fan, then you will likely find it frustrating to read.

a captivating story - The DaVinci Code meets The Name of The Rose. wonderful imagination, information and storytelling. i highly reccommend. (i'm listening to it again - and that's a first for me.)

When I read some of the reviews of this book I was prepared for a mediocre listening experience, but as my wife and I listened we found the story and the performance excellent. The characters were rich, and the historical setting very interesting, and the story captivating to the very end! The reader was very animated and had different voices that seemed to fit each characters very well. I do wish I had a copy of DaVinci's Last Supper and his other paintings with me when we were listening. If you are interested in art, history, mystery or religion you will find them all alive and well here!

I thought the book was good overall. When it came time to finally reveal the secret of the last supper a word was revealed which I assume is latin. The dialog after the word was revealed did nothing to give the listener the meaning of the word. I was left very unsatisfied. I went back and re-listened to the word and ended up looking it up on google to find out what it meant. Once the secret was revealed, it was like the author couldn't end the story quick enough, so the ending felt rushed.

Loved it! Excellent story and narration! I couldn't wait to listen to the next CD. Finally bought it on Audible.

I found this book to have only brief moments of interest surrounded by long boring sections.

There is room on the bookshelves for decent knock-offs, but they better be good. This author proves that simply borrowing the formula of wrapping intrigue, murder and unique interpretations of a familiar painting is not a sure-fire formula for a best seller.