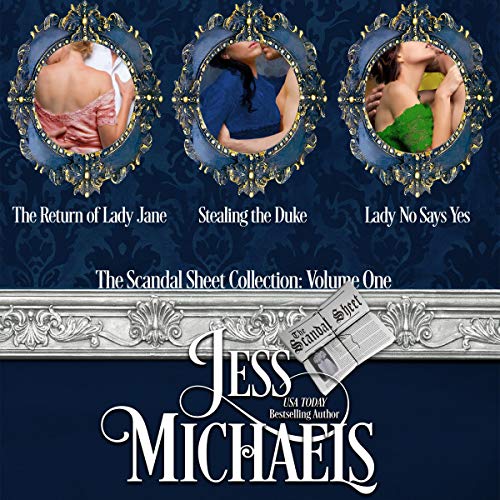 The most wicked secrets in society are being revealed in a weekly newsletter sent only to the elite of the ton. These are the stories behind those scandals. Love and passion, betrayal and forgiveness, sin and seduction are all to be found in The Scandal Sheet, Volume 1.

The Return of Lady Jane

After a surprisingly passionate wedding day, Viscount Colin Wharton begins to believe he could overcome a painful betrayal in his past and truly make a future with his new wife, Jane. But a shocking betrayal crushes his heart. He sends her away, determined to forget her.

Viscountess Jane Wharton has no idea what hardened her husband's heart to her, but she is trying to make the best of her banishment. When she returns to London, she hopes to simply avoid Colin. But that is not to be. As the couple reunites in a clash of harsh words and heated passions, both begin to wonder if they could overcome the past.

Only a secret lurks that is darker than anything either could have imagined. And they will have to fight to survive, as well as fight for the love they both deserve.

When the Earl of Martingale died, his daughter Marianne discovered he had been stealing. When she tried to return the items, it only created a scandal that could destroy her and her beloved younger sister. Now she's found one more item and decides to just sneak it back to the victim in the hopes to keep her disgrace from growing.

Alexander Wittingham, the Duke of Avondale, has isolated himself since his sister died. But when he catches the fetching Marianne trying to return his sister's stolen broach, her presence awakens desires in him, longings he hasn't allowed himself to feel in years. When he realizes her dire straits, he makes her a shocking offer that could save her...if she's willing to surrender her body.

Their affair draws them close physically...and emotionally. But will Alexander ever accept Marianne to be more than his lover? If he does, will it be too late?

Stunning heiress Sophie is known in Society as Lady No because she's spent the past few years refusing the advances of every suitor. But when her beloved aunt challenges her to say yes for just one Season, she can't refuse.

Rowan Sinclair has just had his inheritance stripped and is in dire straights. When he discovers Sophie's secret reason for suddenly saying yes, he knows he can use it to his advantage, even if he doesn't feel good about it.

Their unexpected connection quickly turns passionate and grows into something deeper than either ever could have expected. But can Sophie overcome her reasons for saying no in the first place? And when she finds out the truth about his courtship, will she ever forgive him?