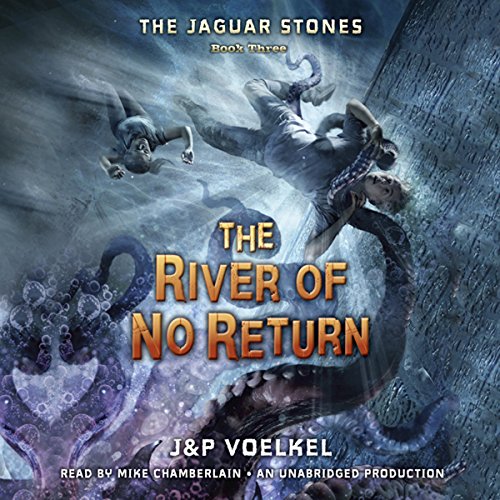 The River of No Return

A hurricane is brewing in the jungles of the Maya, and the ancient Death Lords are on the warpath. Across the world in Venice, Italy, hanging out with his blogger friend Nasty (Anastasia) Smith-Jones and eating Pizza Gelato, Max Murphy thinks he is safe from their clutches. But when a rogue octopus pulls him off his gondola and tries to drag him down to the underworld, Max realizes that the Death Lords have not finished with him yet.

Soon Max is back in Central America and reunited with the only ones who can help him in his battle - Lola, the mysterious Maya girl, and the howler monkeys Lord 6-Dog and Lady Coco. Once again it’s up to the four of them to save the world as they fight off mutant cave spiders, zombie warriors, and, of course, the twelve villainous Death Lords. With the hurricane about to hit land, Max and Lola embark on a one-way journey to danger down the blighted Monkey River. They take shelter in a subterranean hotel, only to stumble upon Death Lord central. Torn between rescuing themselves and rescuing one of the last wild jaguars of the Monkey River region, Max and Lola find themselves drawn into an ever more bizarre series of tests, culminating in a terrifying ballgame that they can never win.

The River of No Return is filled with the same outrageous humor, heart-stopping action, and fascinating details of Maya culture that fans of the Jaguar Stones series have come to love. Listeners will be intrigued as secrets are revealed about their favorite characters while Max and Lola try to stop the world from ending...at least for now.

Weird that the first two books are narrated by Scott brick then the third book comes out it’s narrated by Mike Chamberlain. It really threw me off it was hard to get back into.

A wonderful book. a series to get

loved it. Great series book. Love ancient Mayans mystery. the book to read if you like Mayans and mystery

This is the 3rd installment in the Jaguar Stones series. There is a new narrator this time around, but he still did an excellent job. This is a great series for kids, although I'm an adult and I enjoy it, too. Is is funny and it's hard to put it down. Lots of humor that the kids will enjoy. I highly recommend it!