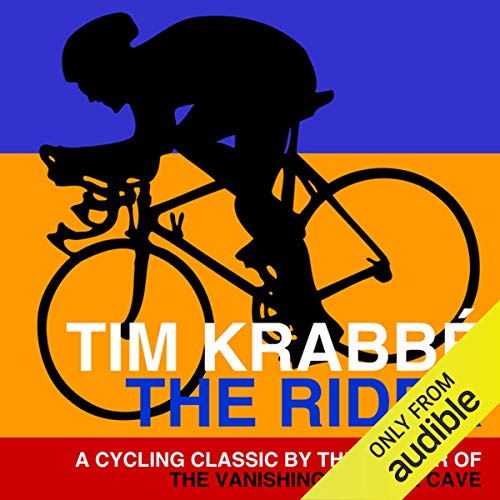 With The Rider, Tim Krabbé has created a book unique in the ranks of sporting literature. He describes one 150-kilometre race in just 150 pages. In the course of the narrative, we get to know the forceful, bumbling Lebusque, the aesthete Barthelemy, the Young Turk Reilhan, and the mysterious rider from Cycles Goff'. Krabbé battles with and against each of them in turn, failing on the descents, shining on the climbs, suffering on the (false) flats. The outcome of the race is, in fact, merely the last stanza of an exciting and too-brief paean to stamina, suffering, and the redeeming power of humour.

This is not a history of road racing, a hagiography of the European greats or even a factual account of his own amateur cycling career. Instead, Krabbé allows us to race with him, inside his skull as it were, during a mythical Tour de Mont Aigoual.

"Like all the best sports writing, The Rider manages to convey the excitement, determination, and skill of the competitors even to readers who have little or no knowledge of the sport. Above all, he evokes the heightened focus of the cyclists, for whom nothing seems real apart from the race." ( London Review of Books)
"A paean to pain and a hymn to the fellowship of the road. Nothing better is ever likely to be written on the subjective experience of cycle-racing." ( The Guardian)

One of my favorite quotes from the book: "Every once in a while someone along the road lets us know how far behind we are. A man shouts: ‘Faster!’ He probably thinks bicycle racing is about going fast." Part memoir, part rant, part poetry, it is the story of a bike race in the subjective voice of one racer. The fictional 150 km 'Tour de Mont Aigoual' is the scene, and the characters are the fellow riders and the unforgiving terrain. I love how Krabbe so accurately renders the ceaseless inner monologues that occur while cycling. This book is perfectly suited to the audio format, and wonderfully performed by narrator Mark Meadows. The words, the language, are so beautifully crafted, so incisive, witty, and economical… I am so pleased that Krabbe turned his copious literary gifts toward cycling. This book has earned its status as a classic of sport writing.

Made me feel like I was racing along with him

What made the experience of listening to The Rider the most enjoyable?

As an amateur cyclist myself - I was looking for a book that took me inside the mind's eye of racer. This book did exactly that. Krabbe' takes the reader through a 135 Kilometer race - the Tour du Mont Aigoual, describing it in the first person. You will feel like you are along side him. Along the way, he describes a bit of history of his competition and has flashbacks to his youth. Whether as the kid racing friends around his block, a Chess Grandmaster, or, as he is now, a professional cyclist, Krabbe' has a competitive spirit that take him to the top cycling in that era.

Have you listened to any of Mark Meadows’s other performances before? How does this one compare?

Not yet - but Mark Meadows did a fine job narrating it.

If you could rename The Rider, what would you call it?

As Hard as I can go - one rider's memoir about one of the toughest bike races in Europe.

I enjoyed the book a lot - there were one or two chapters which dragged on a little but by the last chapter - I was glued to my iphone listening to the narration like I was watching the final seconds of the Superbowl, with both teams tied and watching a long pass to the end zone. That's how I felt.

Good Job Tim - I'm going to be Googling you and this race and the riders you mentioned to find out more - you sparked my curiosity.

I ride 6,000 miles per year as a bike commuter, but I don’t race. I enjoyed the experiences provided and the jargon used by bike racers. This was a good listen.

Fantastic book!
Krabbe paints a vivid picture of his thoughts during a five hour road race through French mountains. He doesn’t miss a thing… from his point of view.

There’s only even been written one novel about bike racing. Fortunately, it’s a good one. One that has literary qualities beyond its scope [sic!] with its condense, tense presence and sarcasms (or is it sarcasm?) And Meadows narration is good, an Englishman who can actually pronounce French and Dutch names even.

To the uninitiated, this is a book far bigger than its topic and plot. That doesn’t mean that Krabbe is trying to portray bike racing as a metaphor for Life or anything. He would never. If anything, Life is a metaphor for bike racing. You didn’t get that. That’s alright, for now. You just might after listening. It’s all about the bike. Always.

I thoroughly enjoyed reading this book and years later listening to it. The narrator does a great job. The insights into the thoughts of a peloton rider whilst in the throws of effort are funny at times and expose the reader to all the emotions of an amateur sportsperson. My favourite quote “He’s licking the other riders plate clean before he starts on his own”.

listen while climbing your favorite mountain!

A beautiful piece of writing that shows that enlightenment can come from many places other than silent zen retreats. And with much more excitment. Fantastic narration as well.

Tim Krabbé didn't miss a beat or detail. He managed to extract the thoughts and emotions every avid cyclist has felt at some point in there ride.

Must read (listen) for every cycling enthusiast...

Tim Krabbe' takes you inside his mind during a 135 K race and walks though the intricacies, tactics, partnerships, and emotional / psychological ups and downs he goes through during the race. The occasional flashback to his past and historical anecdotes about other great and could've been great riders add more flavor. The book is a must listen for riders of all levels, you won't regret adding this one in your library. Also, Mark Meadows does justice to this masterpiece with his narration...

I stopped at chapter 14, and started over, SO good. and I had read the book previously.