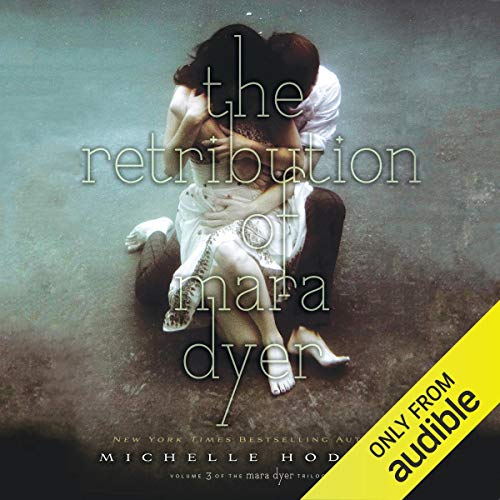 The Retribution of Mara Dyer

The Retribution of Mara Dyer

It had to end sometime, but Mara had no idea it would end like this. Experience the mind-blowing conclusion to the New York Times best-selling Mara Dyer trilogy.

Mara Dyer wants to believe there's more to the lies she's been told.

She doesn't stop to think about where her quest for the truth might lead.

She never had to imagine how far she would go for vengeance.

Loyalties are betrayed, guilt and innocence tangle, and fate and chance collide in this shocking conclusion to Mara Dyer's story. Retribution has arrived.

Satisfying conclusion to an original story!

As the final book in the trilogy, I found that the Retribution of Mara Dyer delivered a very satisfying conclusion to the series. It delivered ample suspense, moments of of smirking levity, romance, joy, sadness, and loss. A good book should deliver emotion, and I think between the story and Romano's narration, it did that.

With that said, the final book (as with the first two books of the series) was a bit long for the plot and could have used some extra editing to speed up the pace a bit. I understand the need for chapter breaks when switching between story lines but there were not enough of those to justify 74 (yes 74!) chapters. Unfortunately, in my opinion this book lacked some great plot twists that left me with a mouth-agape look of shocked surprise. I wish Hodkin had held back more information about various characters so that the conclusion to the story didn't end as predictably as it did.

In terms of the narration, I really liked Christy Romano. Her voicing for characters was varied enough that it was easy to follow conversations. There were only two negatives: occasional mispronunciations and some rather jarring voice-overs in parts of the book.

Overall, a good book that I couldn't put down.

the first two books were spell binding and flowed well. if you're expecting more of the same, this isn't it. characters have completely different personalities. the flow of the book is incongruous. if I didn't need closure so badly, I would have stopped listening after about 10 chapters. it's almost as if a different author wrote it and just needed to get it overwith. the bad launguage was totally unnecessary and added nothing to the story. if you're looking for closure, save yourself several hours and skip to the last 10 chapters. you won't miss a thing.

Love the series!! I just want to know what their real names are!! Very well written and as mentioned by others: no love triangle! I hope to hear more about Noah and Mara.

Ended on an awesome note!

RETRIBUTION was a very weird case for me in that the entire book was actually a bit lacking for me but the ending was so clever and very fun! It actually left me on a good note with the series which was nice because I was kind of frustrated with the overall feel of this book, especially as a series conclusion. It sort of felt like it should have been the “sophomore slump” you so often see in trilogies except this happened in the last book instead. Very strange!

RETRIBUTION was the least mysterious/suspenseful for me. There was a lot of action and some straight up “I can’t believe he/she just did that” moments but it felt more like shock value than actual suspense. I was totally bummed that I didn’t have as many “omg” or “wtf” moments as I had in the first two books. Book two was just out of control with crazy moments and RETRIBUTION kind of took a turn…

There was a lot going on in this book but things started to feel way more far-fetched. I mean, we’re dealing with possible paranormal, possible sci-fi, possible mind-messing, but things started to really stray here, I think. Without spoiling anything, I will note that there seemed to be a major character shift which really threw me off. There are new characters who gain more spotlight and other characters who end up moving to the back-burner or are completely (physically) absent for large chunks of the book. It kind of screwed up the dynamic for me and just plain felt odd to do in the last book when relationships are solidifying and answers are finally happening.

I was also not impressed with the new settings and scenery change. Again, it felt like the “sophomore slump” since that so often happens to me in book two even though this was the last book in the trilogy. I just really didn’t like the turn the book took and I felt like an inordinate amount of time was spent in this new setting with this new concept. I really felt like things could have been wrapped up quicker — or just differently all together — and the story could have continued with more suspense or crazy answers.

When it comes down to it, RETRIBUTION did provide a lot of big questions for me. My issue was that I wasn’t a big fan of how those answers came to be. I did like what the answers were but I wished things had played out a little differently to get there. Some scenes felt unnecessary and overdone when something simpler could have happened. It was paranormal, it was science, and yet it was neither. I was sadly not super impressed with the conclusion to the series but I was left on a high note with the very ending of the book itself. I wished parts in the beginning of RETRIBUTION had been more condensed and maybe played out a little differently. Overall, the series was fun but felt a little too dramatic to me when it could have been more suspenseful. The suspense and mystery was absolutely GREAT but I wanted so much more of it in the last book.

wel, I can't say that I loved the series but can't say I hated it either .. it is that kind of series that after a while you won't remember it at all .. Noah is another Edward with an accent but Mara was a strong character .. I loved Jamie (Jamal) he was the soul of these books .. I really wanted to know what happened to stella but I guess its an open ending there .. Daniel has always been my hero and I love him so much
I'm glad that I read the series but for me it is overhyped alot :)

Would you try another book from Michelle Hodkin and/or Christy Romano?

Maybe by Michelle Hodkin but never by Christy Romano.

Would you recommend The Retribution of Mara Dyer to your friends? Why or why not?

I would recommend the first 2 books but I was very disappointed by this last one.

She was just terrible. All her intonations were wrong and she kept mis-pronouncing words such as "contraindication" which she said as "con-train-diction." She broke up sentences in an odd way, had a terrible English accent, and really wrecked the listening experience for me.

As a series, maybe.

It's too bad - I really liked the first 2 books (despite the narrator) and was looking forward to this one. I found myself rolling my eyes at too many spots.

Books 1 and 2 were pretty fantastic but what the hell happened to the 3rd book?!? It was awful. Just teenage drama up the ying yang and he (MC) wasn't even in 75% of the book!! It was boring and a lot of unanswered questions as well. I feel so sad because I expected it to be exciting and wonderful but it was neither. They lost their chemistry too.

This is not my favorite YA series by any means ( check out Virals and the Electric Michael Vey) but it was ok. I really got tired of all the black out ,wake up elsewhere moments used throughout the series. It was like the author had no other way to segue into the next scene or into the memories. I know there is another trilogy about Noah but I’m skipping that one.

This series pulled me forcefully out of my book slump. I adored every second. I laughed, cried, screamed, and even vomited (maybe due to a stomach bug). It’s worth a credit or even the money. I highly recommend it and I will read it over and over again. Thank you, Michelle Hoskin, for sharing your imagination, your sense of humor, and your wonderful perspective on romantic relationships. The experience was unique and beautiful!

my least favorite of the series

I REALLY enjoyed the first two books in the series. so my expectations were pretty high, the story was still good. but I felt like it was the weakest of the trilogy. I also didn't love the Narrator's English accent.