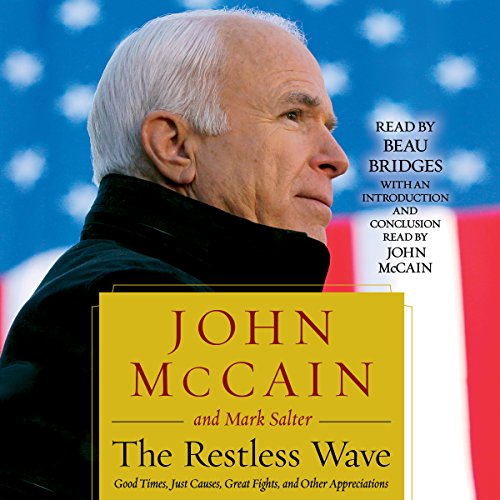 A candid new political memoir from Senator John McCain - his most personal book in years - covering everything from 2008 up to the present.

In a time when Washington, DC and the country are more polarized than they have been for decades, John McCain is the rare public figure who has earned the respect of people on both sides of the aisle. He is a model for bipartisanship and political integrity. In his 40 years in politics, McCain has never been afraid to buck trends or ruffle a few feathers. His words are more important today than ever.

The Restless Wave begins in 2008, with McCain's presidential campaign, and then follows the senator during his time as a senior Republican lawmaker through the Obama administration, when the country was tested at home and abroad. McCain shares his experiences during the divisive 2016 election and his no-holds-barred opinions on the current developments coming out of Washington. He also discusses the vital challenges from abroad: Russia, NATO, the campaign to defeat ISIS, and our ongoing operations in Iraq and Afghanistan, among others. Candid, pragmatic, and always fascinating, John McCain holds nothing back in his latest memoir.

I am a Democrat and disagree with many of John McCain ‘s opinions and decisions; that being said, I have never doubted that the INTENT of those opinions and decisions were, to him, in the best interest of the people and country. He is a caring person, no doubt. Many who have strongly disagreed with him he lists as good friends such as Ted Kennedy, Hillary Clinton , Barak Obama and many others “across the isle. “.

This book points out his extensive knowledge of foreign countries and the nuances that make them tick...a knowledge sorely lacking in the current leaders.

As for being a hero...not many of us could endure nearly 6 years of imprisonment and come thru with enough brain power to go on and serve the country for many more years. He is a true hero.

This book is McCain’s good bye. I hope he has more time. We desperately need more people with his guts...even if we disagree sometimes.

I thoroughly enjoyed listening to this book. The book covers his campaign for presidency to the current time. I found some of his observations and comments about people such as Hillary Clinton, Joe Biden, Obama, both Bushes and high military command most interesting. Toward the end of the book he also had some comments about Trump. In this book what came through to me loud and clear was that McCain’s priority is the country and all else is secondary. Prior to reading this book I had read “Faith of My Father’s A Family Memoir” by McCain; doing this was most helpful in understanding McCain in this current book. I highly recommend this book.

I read the book as an audiobook downloaded from Audible. The book is just over fourteen hours. McCain read the forward but the actor, Beau Bridges, narrated the book.

A Well Written and Performed Book at the Perfect Time

I have always liked and respected John McCain even though we often don't agree on policy. He is a true hero in my book who dedicated his life to his country. Living in Maine, I have had the fortune to be represented by some of America's greatest leaders. John McCain fits their mold of putting the country first and striving for bipartisan compromise. I learned much about the senator that I did not know. He speaks honestly and discuses accomplishments and mistakes. Most important, he tells a powerful and welcomed history of our country and our important role in supporting freedom. He tells stories about brave individuals fighting against difficult odds and putting their lives on the line to instill freedom in their own country.

I must admit that, while I enjoyed the entire book, the second half had me riveted and not wanting to put the book down. I finished it on a six-hour round-trip drive to Boston. McCain ends the book with a refreshing and emotional discussion that reviewed his life, his fight with cancer, his love for Arizona, and his hopes for his future and our country's. Jeff Bridges performance was excellent and it truly seemed if Senator McCain was reading the book himself.

God Bless you John McCain as you pursue the most important fight of your life. I am a much better person thanks to your influence on my life.

A brave and rousing farewell

I am a Democrat and opposed to many of the political opinions of Senator McCain. But here is one of the most eloquent and passionate epistles of American ideals, and their forceful promotion in the face of all enemies, foreign and domestic. I was especially moved by the cheerful and optimistic epilogue read by the author himself, a great American.

John McCain gave so much to us and he loved life. He followed his torturess experience in Viet Nam with years as a great U.S. Senator. Although I am of the opposite political party, I have always respected and appreciated the "Maverick from Arizona's" statesmen-like ways to try to work with the opposition to achieve great legislation and leadership. John McCain was a roll model for future Senators and a good man.

Hope for the Future

Ask not what your country can do for you —

Ask not what your country can do for you—Ask what you can do for your country.” If JFK hadn't said this I am sure John McCain would have. I am only 2 hours into the book but it is exceptional just like the author and something about Beau Bridges' narration just seems like it was meant to be. John McCain embodied what it is to be a patriot and to put country before party, a quality that is all but extinct in these polarized and partisan times in which we live.

This book and the audible or nothing short of incredible. Every moment was informative and interesting. It was emotional, heart wrenching, and joyous. Anybody would be well served to read the book or listen to audible. And Bo bridges was masterful.

I have been interested in John McCain for years. Listening to this has warmed my heart and makes me wish that I could vote for him for president, tomorrow. Shouldn’t we elect presidents based on their character?

The Restless Wave...and Vision for the Future

Whether one is a Republican, Democrat or Independent, this is a book that includes interesting life stories, insights, and a vision for what is possible in the future if we all work together for the good of our country while respecting our differences.

When I got the book, I did not have to high expectations and I didn't really like John McCain. After reading it, I am impressed by his commitment and good work in the political arena. Although I tend to disagree with a number of his perceptions of Russia and China, I like his honest reflection and clear cut analysis. Highly recommend this book!