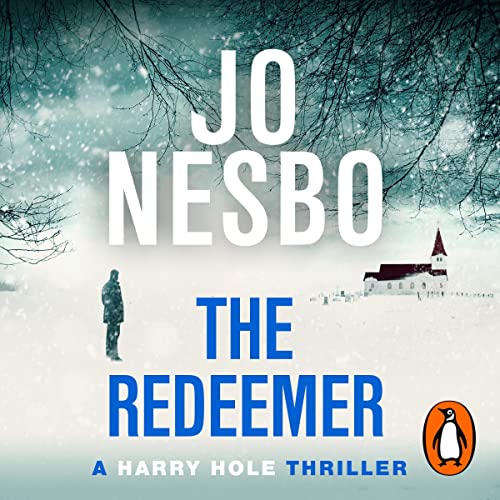 One freezing night in Oslo Christmas shoppers gather to listen to a Salvation Army street concert. An explosion cuts through the music, and a man in uniform falls to the ground, shot in the head at point-blank range.

Harry Hole and his team have little to work with: no immediate suspect, no weapon and no motive. But when the assassin discovers he has shot the wrong man, Harry Hole’s troubles have only just begun. After some exceptionally shrewd detective work, the team begins to close in on a suspected hit man, monitoring his credit card, false passport and the line to his employer. With no money, only six bullets and no place to stay in the bitter cold, the hit man becomes increasingly desperate. He will stop at nothing to eliminate his target. Moving at a breathless pace, The Redeemer is Jo Nesbo’s most gripping thriller yet.

This was my third Nesbo novel and, on balance, I enjoyed it the most. The "Prince" was never quite believable to me but the action was the strength of these first reads. Redeemer is equally action packed and gets 4 stars because of a writing technique that is clever but tittitating. Chapters begin with a seeming continuation of the prior chapter only to be jolted later by discovering that Nesbo has changed character on the reader without the use of a proper noun or other identifying trait to signal the switch.

Corruption is everywhere in this book. We find corruption in the business world and the police department, which is usual, but now we find it in the Salvation Army!!! The ending expands the circle of corruption to an icon of respectability in Nesbo's world. And the shadow of corruption now appears on Harry's path. Did Harry do the right thing?

I'm obviously behind the times, but have just discovered Jo Nesbo. Beautifully written, really well plotted and excellent character development. It's Norwegian setting and general tone make comparison with Steig Larson inevitable - not as original a series as the Millennium trilogy, but overall perhaps a better edited one ?

Sean Barrett' narration is superb. The delivery of different characters is subtle and consistent throughout the recording.

No negatives really - buy it.

This book continually gathers pace as you read it., it is engrossing. Harry, the lead detective, has his own personal problems and gets you onside in no time. This is the second book I have read By Jo Nesbo and I have enjoyed both of them.

I didn't think I could find anything as satisfying as a Kurt Wallender (Henning Menkell) novel but praise the Lord and pass the ammunition, here is Jo Nesbo with his main man, Harry Hole. What is it about Scandinavian crime - it reigns supreme. The best thing about The Redeemer is the plot twists and turns without becoming convoluted. The characters are interesting, believable and multil layered, even the minor ones. Even when you know who's done what and why, you still don't know how it will end. Nesbo is such a skilfull writer, I'm thrilled to have finally discovered him.

I love this thriller. Had to keep listening, so many twists and turns and are sad that is is over. I will start the next book in this series immediately.

was as expected for a HH story - the most unbelievable part was his drinking, can authors not write a book ( character ) that is terminally damaged?? HH would be more believable if he like his drink but was not able to be be fully beholden to it.

If you could sum up The Redeemer: A Harry Hole Thriller, Book 6 in three words, what would they be?

A classic Nesbo/Hole story with more twists and turns than a tin of spaghetti.

By the time one reaches the tipping point in a series, they might be expecting the standard and pace to level out. This is certainly not the case for Nesbo's Harry Hole series. This title is a marked development (for the better) on the previous title, "The Devil's Star"; not that it was poor - it was the best in the series to that point. It is also a world apart from the more recently released "The Cockroaches", which was in fact Book 2, and the book that I last read. In other words, Nesbo's plots are getting more complex, the characters are getting deeper (as they should after 5 books) and suspense is the winner. I normally rate myself on being able to pick the plot twist in this genre, and, although I picked the principal plot line, the sub-plot was a surprise to me.
Again, Sean Barrett does a bang-up job as Harry; again, I am looking forward to the next installment (especially with the high praise that has been bestowed upon it).
This title is well worth the read, but it probably is improved if you have read Books 3, 4 and 5 first. It can stand alone, but it is much better with the back-story intact.

Would you listen to The Redeemer: A Harry Hole Thriller, Book 6 again? Why?

Have you listened to any of Sean Barrett’s other performances before? How does this one compare?

no, but kept me on the edge!

I will be interested to listen to the other sequences!

Yes. Sean Barrett delivers a terrific performance of all the characters, even the female ones. I could listen to him any time.

He has a great delivery and even performs the females well. I like the quality in his voice.

Skullduggery in the Salvation Army

An entertaining and first-class reading of an excellent translation. Harry (more or less off the booze) has to solve a complex case involving rivalries within the Salvation Army, a Croatian hitman and a guard dog that attacks without barking or growling - what more could you want?