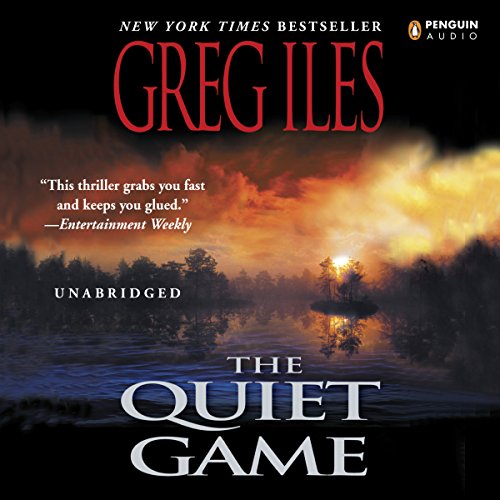 When former prosecutor Penn Cage returns to his hometown of Natchez, Mississippi, he doesn't find the peace he desperately craves. He finds that his own father is being blackmailed by a corrupt ex-cop. And when Penn investigates, he uncovers a murderous secret - and the small town's violent past.

"The pace is frenetic, the fear and paranoia palpable, and the characters heartbreakingly honest. Iles strikes not one false note.” (Cleveland Plain Dealer)

“Would make James Lee Burke or even Pat Conroy proud. This is storytelling at its absolute best, a tale of near-epic status.” (Providence Sunday Journal)

Greg Iles' writing reminds me of Grisham in that the plot has many strings tugging the main character in different directions while moving forward. This story has racial issues, political intrigue and a few murders.

Like most long and drawn out novels, there is some fluff that could have been cut out. The story is slow getting started as the characters are introduced and the background on an 30 year-old unsolved murder is introduced. As the story unfolds you don't know who to trust as the good guys or who the bad guys truly are which leaves predicting the ending up in the air. As described by Frank of Pittsburg PA, this story is "like three roller coaster rides - back to back to back -" with twists and turns that keeps snapping your head around.

For me, I don't like stories this long (20 hours) because I eventually lose interest and don't care what the ending will be. But this story kept me hooked wanting to know how Greg Iles will tie the political, racial and murders together and what the outcome of the storylines will be. The court room drama was very good, mostly occurring during the last 5 or 6 hours of the story.

This is my first listen to the narrator. He's not the best but I have no complaints.

This is a good book that moves through the story comfortably until close to the end when it goes into high speed. I defy you to stop listening at that point.

It stops short of being a perfect book, largely because it's trying too hard. As a fellow southerner, I understand Ile's desire to remind the rest of the country that racism is and was far more widespread than the borders of the southern states as well as to let people know that everyone wasn't bad. But there's a subtlety to the argument that's lacking. As another reviewer pointed out, our hero was wildly heroic, with few obvious character flaws and it didn't land in a completely honest way for me.

That said, it's a very interesting listen and a worthy effort. You won't be wasting your time listening to it.

This read was like riding three roller coasters back to back to back while blindfolded! Started with a slow climb then drops and twists and turns all the way to the end. Just when you think you have it figured out, another bombshell drops.

Excellent read, plot(s) and narration. This is a must read!!

What a Great Surprise

I did not know who Greg Iles was prior to stumbling upon this book. I saw the good reviews, and the genre appeals to me, so I gave it a shot.

What a terrific book!! I have not listened to a book this good in a long time. It reminded me of a good John Grisham or James Lee Burke novel. It was that good!

I did listen to the second and third books in this series and the second one was a big let down and the third was much better, but not as good as this first effort.

Overall, I recommend the series!! Try it, you will definitely enjoy this one if you enjoy the genre!! Tom Stechschulte does a fine job as narrator on this one.

Move over Clancy, Iles is in the building!

My first introduction to Greg Iles was a three set Abridged CD pack which included "The Quiet Game". I was hooked. I bought the Unabridged Version mistakenly thinking it was the follow up to "Natchez Burning". With no other options I listened. It literally wore me out. This book has depth. It has love, love lost then found, a love triangle, race relations, murders, conspiracies, alliances, good cops, bad cops, good Feds, bad Feds, politicians, bad guys becoming good guys and ladies and gentlemen "J. Edgar Hoover". Nothing tricks the readers, just hold on and enjoy the show.

Greg Iles is genius in being able to keep an intricate plot and complex characters moving in different directions keeping listeners on edge. He masterfully changes the action like a major league pitcher changes speed and direction. Sometimes it felt like an NFL QB artfully running a game winning two minute drill. Some of it was implausible but remember, it's a novel. The main characters as well as those on the periphery are solid and relevant. I'd love to see one minor female character return in The Penn Cage series.

I'm patiently awaiting "The Bone Tree". I hate to think Iles might end this series after the third book in his Trilogy. Stay healthy my friend and Godspeed.

My first Isles book, but won't be my last. I wouldn't say it was heavy on the suspense factor, but it was an interesting plot, enjoyable characters.

This was not an author nor a narrator I was familiar with this one came just by seeing someone in the waiting room of my Pain Mgt. Doctor reading it. Sure glad I listened to him and that we had time to exchange some book names. I stepped into this one not knowing what to expect but by the second hour I was in for the complete ride. And what a ride it has been. Iles does a great job weaving a story of love, loss, incest, corruption in high places and a cold case murder. I listened to the first 6 hours non-stop. For me it was one of those that grabs on and wont let go. The narrator has a very smooth style of delivery.

I prefer Dick Hill for the Greg Iles books but this narrator is much better then the one who read Natchez Burning!

This is such a good book that deserves to be listened to in it's full unabridged length. There are so many plot twists and great characters to fill the 20 hours of listening time. This book also fills in background on the characters for the other Penn Cage novels. I highly recommend The Quiet Game.

This was a great read and thrill ride to the finish! The narrator was very believable and even his female voices as well as the child's voice was very good. I am glad I used my credit for this book. I really like Greg Iles!

Listened to this for a long time before I gave up

I am really seriously conflicted about this book. Greg Iles can write, and Tom S. can narrate, but I gave up on it with three hours left. The trouble, I think, is that Penn Cage, as he is written, is Superman. I like my protagonists to be more than one-dimensional, and Mr. Cage is 100% hero. There is a lot of truth about a lot of topics here, but the bad guys are SO bad, and the good guy SO good that the book suffers for it, and loses all credibility before the, uh, climactic trial. Everything in the world in terms of drama, politics, the Sixties, the FBI, race relations in the South, father-daughter incest, grisly violence, utterly hypocritical politicians: the list could go on almost forever. Mr. Iles just cannot stop piling on, and after a while the book becomes exhausting. Much of the dialogue is hackneyed. The sex is of course mind-boggling. The government of Mississippi is riddled with corruption and rotten lies, as is the FBI, etc. If he had thrown out half of this book it would have become a much better piece of work. When you throw every single thing in the kitchen into the pot, though, what you end up with is inedible garbage.

Would you ever listen to anything by Greg Iles again?

No. I've had enough. I read the first couple of books of his, and he can write, but too much of a good thing is not, as Mae West said, wonderful. It's cloying. Livy must be the most stunning creature on the face of the earth. Caitlyn must be the bravest, most intrepid crusading journalist in history. Dr. Tom Cage must of course be the best physician since Hippocrates. You get the point.

I don't like this kind of question. He is good but not great. There is no humor of any kind in his reading, another thing the book lacks. He is asked to portray all of the characters as cartoonish exaggerations of human beings. This does not make for good entertainment, nor is it good literature.

Could you see The Quiet Game being made into a movie or a TV series? Who should the stars be?

I didn't care enough about the book to play those games.

There are so many good-to-great books about the South and about race; you'd be better off with one of them. Try Streets of Fire, or, much better yet, the Robert Penn Warren masterpiece All the King's Men. Even Grisham or James Lee Burke would be better. Give this guy a pass.

It's a very Americanized crime story, given time and place in which the story is set not uncommon, but it keeps you occupied and interested.

Catching crime story, great speaker. Some smaller inconsistencies, overall a great book. Now looking for the next in the series!

... a little bit too long and exaggerated at a few areas

the reader does an excellent job with the main character, but emphasis the other persons often to much for my opinion...especially the women and some dialects