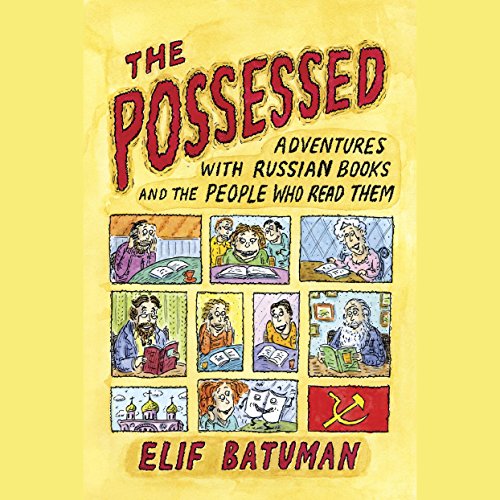 One of The Economist's 2011 Books of the Year

The true but unlikely stories of lives devoted - absurdly! Melancholically! Beautifully! - to the Russian classics

No one who read Elif Batuman's first article (in the journal n+1) will ever forget it. "Babel in California" told the true story of various human destinies intersecting at Stanford University during a conference about the enigmatic writer Isaac Babel. Over the course of several pages, Batuman managed to misplace Babel's last living relatives at the San Francisco airport, uncover Babel's secret influence on the making of King Kong, and introduce her readers to a new voice that was unpredictable, comic, humane, ironic, charming, poignant, and completely, unpretentiously full of love for literature.

Batuman's subsequent pieces - for The New Yorker, Harper's Magazine, and the London Review of Books - have made her one of the most sought-after and admired writers of her generation, and its best traveling companion. In The Possessed we watch her investigate a possible murder at Tolstoy's ancestral estate. We go with her to Stanford, Switzerland, and St. Petersburg; retrace Pushkin's wanderings in the Caucasus; learn why Old Uzbek has 100 different words for crying; and see an 18th-century ice palace reconstructed on the Neva.

Love and the novel, the individual in history, the existential plight of the graduate student: all find their places in The Possessed. Literally and metaphorically following the footsteps of her favorite authors, Batuman searches for the answers to the big questions in the details of lived experience, combining fresh readings of the great Russians, from Pushkin to Platonov, with the sad and funny stories of the lives they continue to influence - including her own.

I first became aware of Elif Batuman's book almost seven years ago when I saw it suddenly appear (mistakenly?) next to Tolstoy on the Fiction shelf at B&amp;N. A few years later at another bookstore I saw it shelved next to Dostoevsky. At first I was a bit irritated. I figured it was a bit of shelving incompetence. What kind of people were these bookstores hiring these days? Later, however, I softened. I actually began to feel this was a form of NINJA (Sambo?) marketing. Perhaps, it wasn't accidentally placed there. Who actually peruses Literary Criticism/Literary Memoir sections these days? Perhaps, the placement in the Fiction section next to BIG Russian authors wasn't a mistake after all. It actually jammed the book into my craw; dropped it into my radar.

How to describe the book? It isn't exactly a memoir and isn't exactly literary criticism. It reads like a hyper-caffeinated, precocious literary/travel diary for an introspective writer/academic fascinated by the granular context surrounding Russian novels. Batuman isn't just interested in the text. She wants to shoot Chekhov's gun and lay on some train tracks in St. Petersburg. She wants the genealogy and the genetic profile of these novels and stories. Toward the end of her academic career (and her book) it isn't just fetish items and places she is obsessed with. She isn't just finding the context and the clues surrounding Russian novels, the novels have become part of her life. Her last essays seem to reflect the power of Russian novels to invade the cold spaces in our brain, break the chains of reality, bleed into our relationships, our dreams, our motives.

For the most part, I dug this book. The center essays were a bit uneven, however. So, I can't claim this is close to a perfect book. But it is unique, fascinating, and well-written. Batuman has a way with prose. As a 6 foot tall, Turkish woman, her perspective on everything is biologically unique, but it is her talent at writing that makes this book, this precocious journal, this love story to Russian lit worth the time and cost.

A Memoir of the Writer's Graduate Student Days

In a nutshell, this book is too much about the author and too little about Russian books. Though she travels to exotic locales -- Hungary, Samarkand -- the author's life is just not that interesting. The parts about the Russian books are good, but there's too much extraneous stuff between them.

With editing, this would have made a great New Yorker article. Then again, perhaps that was its original incarnation and someone made the ill-fated decision to expand it into a book. I'm too uninterested to care. I'm done with this book.

The "Samarkand" sections are wry, witty, and insightful. The author would do well to find someone else to narrate. I was reading the paper book as well as listening when I couldn't read. All of the humor I found when I read was flattened when I heard her reading it, in her melancholic monotone.

Chasing Tolstoy and Other Russian Authors

Batuman's story of following her interests in Russian authors was interesting and mostly engaging, but I think it would have been better if I had read more of the books she discussed beforehand--especially Tolstoj and Pushkin. The narration was good and the information about her experiences living in former Soviet satellite countries was extremely interesting! It was worth listening to this book for that insight alone. Anyone interested in Russian literature or in life in Russia / former Soviet countries shortly after the fall of the USSR will find this book engaging and enjoyable.