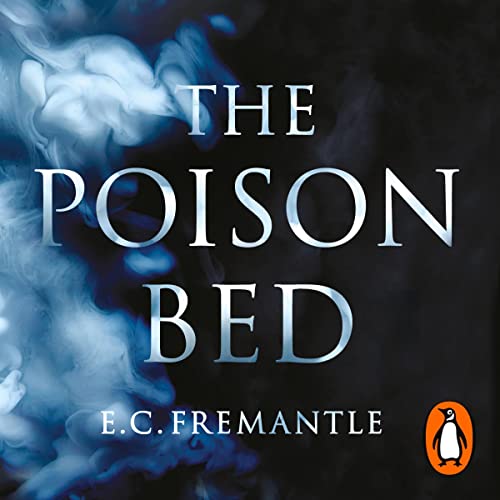 Penguin presents the audiobook edition of The Poison Bed by E C Fremantle, read by Ross Anderson and Perdita Weeks.

A Marriage. A Murder. One of them did it. Which of them will die for it?

In the autumn of 1615, a scandal rocks the Jacobean court when a celebrated couple are imprisoned on suspicion of murder. She is young, captivating and from a notorious family. He is one of the richest and most powerful men in the kingdom.

Some believe she is innocent; others think her wicked or insane. He claims no knowledge of the murder. The king suspects them both, though it is his secret at stake.

Who is telling the truth? Who has the most to lose? And who is willing to commit murder?

"A Jacobean Gone Girl. Dark and deeply satisfying, The Poison Bed is a tale of monstrous intrigue and murder." (M J Carter)

"A thoroughly compelling tale of sexually-charged intrigue and murder. Once started, impossible to put down." (Minette Walters)

I just finished re reading this, and it’s soooo good! Well written and well narrated. A treat!

As good as the rest of Elizabeth Fremantle’s work

I love all of this intelligent author’s work and while this one is less court drama and more thriller, it’s as immersive and filled with historical detail as the others. If you’re looking for Elizabethan/Stuart era literary fiction, look no further. Thrilling, complex, readable. 5 stars without a doubt.

The first half is quite intriguing and I love the double narrators. Each is wonderful voicing the main characters. The character of Robert becomes quite tedious by the end, and you end up wishing you did not have to carry on with him and could just hear Frances.

Don’t bother. Not even the twist at the end makes this worth the read. It’s not even a real twist.

Absorbing! Elizabeth Fremantle delivers a Jacobean Murder Mystery Masterpiece! Based on true events and a real cast of characters, Fremantle has created an engrossing story that readers will not be able to put down. Was the beautiful Frances Howard guilty of murder? Conspiracy to commit murder? Or just an innocent pawn in her uncle's game for power? Just when you think you've got it all figured out there is a plot twist so shocking you'll have to re-read it to believe it!

This novel had me sitting on on the edge of my seat. I do not know a lot about this period of history but it is only the background to a strong tale with plenty of twists and turns. The two narrators are wonderful giving a flavour to the contrast of an insider and an outsider.

Had to stop listening because the female narrarator is so quiet. I've never had that problem with any other audiobook.

House of cards level of duplicity

I thought the narrators were excellent, however the female narrator’s voice could be so quiet that I would have to turn the volume all the way up on my speakers which would be intermittently inaudible or shrill ear piercingly loud.
The first half of the book was quite slow and I lost interest for a while but decided to power through and finish up and that’s when I got really juicy and salacious.

I am amazed at the imagination of the writer. Such a great storyline. The performance of the readers is what completely sucked me in. Made a very long, boring drive to southern California enjoyable.