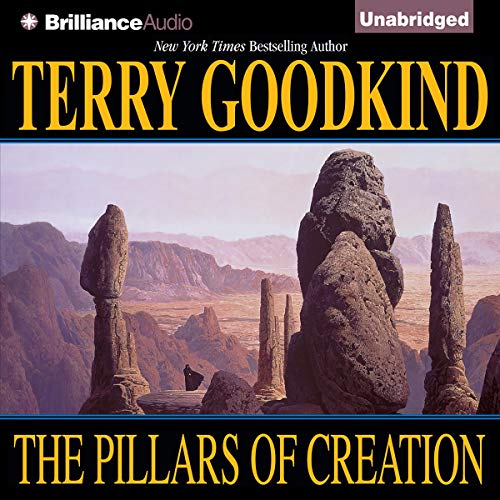 The Pillars of Creation

Tormented her entire life by inhuman voices, Jennsen seeks to end her intolerable agony. She at last discovers a way to silence the voices. For everyone else, the torment is about to begin.

Richard Rahl and his wife, Kahlan, have been reunited after their long separation, but with winter descending and the paralyzing dread of an army of annihilation occupying their homeland, they must venture deep into a strange and desolate land. Their quest turns to terror when they find themselves the helpless prey of a tireless hunter.

Exploited by those intent on domination, Jennsen finds herself drawn into the center of a violent struggle for conquest and revenge. Worse yet, she finds her will seized by dark forces more abhorrent than anything she ever envisioned. Only then does she come to realize that the voices were real.

Staggered by loss and increasingly isolated, Richard and Kahlan desperately struggle to survive. But if they are to live, they must stop the relentless, unearthly threat that comes out of the darkest night of the human soul. To do so, Richard will be called upon to face the demons stalking among the Pillars of Creation.

Ruined by the Narrator

I think anyone that really enjoys a robotic style voice with improper inflections would really enjoy listening to this book.

Due to the narrator I liked the story being over best.

Who would you have cast as narrator instead of Jim Bond?

I think Stephen Hawkings could have read this book for us and sounded less mechanical than Jim Bond did. However, if I could have my way in the matter I would have cast almost any of the other narrators from this series...preferably Sam Tsoutsouvas, but Buck Schirner or John Kenneth would also have made it much better.

If you could play editor, what scene or scenes would you have cut from The Pillars of Creation?

The scenes where Jim Bond is reading are the ones I would have cut...sadly that is the whole book.

Please Audible, I'm begging here, as a fan of audio books (many different genres) and a fan of Goodkind, please re-do the books narrated by Jim Bond, the man has no business narrating any books, but especially this series! I love the series, have read them all and was so looking forward to hearing them read, but it is more a torture, having to struggle through listening to Bond, than anything resembling a relaxing time listening to a beloved series.

If you know up front that the Richard,Kahlan, and the usual cast are not the main characters in "The PIllars of Creation" then the story is not dissapointing. They serve as the background story for most of the book until the last several chapters. This book centers around 2 other offspring of Darken Rahl, Jennsen and Oba. Rather then distracting from the series, these new characters expand and inrich the story. It starts off a liitle slow but worth listening to the end.

The Pillars of Creation

This story took a different track and introduces new characters to the ongoing saga but this does not detract from the overall story. If the reader is patient and allows the writer a chance to provide the necessary character building it gives the end of the story great depth and understanding and provides intrigue for the next segment of this story. It also fills in gaps from the previous stories and answers some questions or ideas that have lurked from the start of this adventure.

The story told from the other side!!

I seen a lot of bad reviews on this book,Why? I think Terry was doing a lot of character building and the story was told from the other side, Emperor JaGangs side!!! Also tells the story of Jensen Raul... Richard and Kahlan is not in this book untill the last 7 chapters the last two hours.. Of course they saved the day and left right off from the last book. Zed and Addi shows off their powers and take out a whole army!! Overall this was a good book different from the other six but good,I think Jim Bond can do a better job on switching up his voices at times it seems their all the same.. Stay the path getting ready to start the 7th book!!!!

I'm about 12 hours into this book and nothing of significance has happened yet. The main character, Jennsen, acts like a complete idiot and trivial events are described in excruciating detail for no apparent reason, except maybe to make you want to pull your hair out and yell "JUST GET ON WITH IT ALREADY!" For instance, about 4 hours of the book is dedicated solely to describing Jennsen's trip to see and speak to a sorceress. The whole trip could have been adequately covered in about 10 minutes. But Goodkind makes us sit through 4 hours (about 4 days in Jennsen's timeframe) listening to graphic details of every person, tree, rock, bug, plant, flower, stream and animal Jennsen encounters or avoids while on this trip. All the while she's on this journey, Jennsen is engaged in a ridiculous and imbecilic internal dialogue about the danger she's in because she incorrectly believes that people she's never met are trying to kill her. Since the reader has presumably read all the previous books, the reader already knows, unlike Jennsen, that all of her facts and assumptions are completely wrong. Yet, we have to sit though hours and hours of her doing one stupid and unnecessary thing after another based on incorrect facts, false fear, bad assumptions and misplaced apprehension. It is extremely frustrating.

What would have made The Pillars of Creation better?

To focus on the series main characters and change the robotic sounding narrator.

Would you be willing to try another one of Jim Bond’s performances?

I hope not, but I may be forced to if I continue the series.

If you could play editor, what scene or scenes would you have cut from The Pillars of Creation?

Honestly it's just a total deviation from the series with the different character focus, just doesn't work for me.

I really know very little about the process of turning a novel into an audiobook. However, I just don't understand how some of these narrators can get through the producer's quality control mechanism in place. How do you think Jim Bond is a good narrator and continue to use his services for the series? It's beyond me....

I really liked this book. I've listened to the last 6 books in the series, and was almost tired with the constant turmoil. This book was a little slower paced and didn't have as much of the main characters (Richard and Kahlan) in it; however, it delivers a wonderful subplot to the ongoing story. I actually loved this book!

The Narrator RUINED the whole experience. It's like Ned Flanders reading a scary story. Just...Noooo. Heidi-ho neighbor, I'm cracking this witch's sternum pretty good, gosh oh gee! Whatever shall I do. <<heavy sigh>> I even sped it up to 1.5x to get thru it faster. My fiance read the actual book & said it was not his fave in the series, so perhaps it's not all the narrator's fault.

I forgive you Terry

I forgive you for turning your books into a Randian paradise, I Love Ayn, but you go kinda far. However, for not making me deal with the heartache of losing Betty, you are forgiven!

I have really enjoyed the series so far, but this book is really repetitive. The first 10 Chapters and the last 10 chapters tell the majority of the story. The rest of the book is Jennsen repeating what she must do, and Oba repeating how important he is, constantly reminding the reader that he likes to learn new things. However, it is interesting to see the story through new eyes other than the normal main characters.... that alone is what gives it 3 stars in my opinion. I hope the next book is better.

The most important thing first: Richard is not the protagonist in this one! On my first time listening I was really mad at that, but the second time, knowing what was to come, I could enjoy it way more. Just to warn you ... Ohh, and there is going to be a goat in this story ... a lot ...

The story is about a young woman named Jennson Rahl, Richards half sister (not really a spoiler, you will learn that within the first few chapters). She meets the mysterious Sebastian, chief strategist for Emporer Jagang. She believed for her whole life, that Lord Rahl - first Darken Rahl, now his son Richard - wants her dead. She spent her entire childhood on the run and in hiding. After her mother gets killed by what she believes to be a Quad, she decides to stop running. On her journey to meet her fate, she discovers the secrets behind her heritage and the disembodied voice, that had been her constant companion for as long as she can remember. This journey takes her all through the new and finally the old world.

This book suffers from the same problems, all the others since stone of tears suffered, too. Way too much repetition, bland speeches, and way too many words, to describe simple things. The new characters are interesting tho and there are quite a number of well-crafted plot twists. There are no major logical flaws with the story. He explores the mechanics of his intricate magic system, talks about balance, free will, prophecy and always addresses his trademark objectivism. I myself don't mind very technical descriptions about magic systems because I think he did an amazing job, but I can see that there are lots of people, who will yearn quite a lot while he goes on and on about the way magic interacts with people and the world of the living.

Overall, I have to say that I liked this book. I like Goodkinds style of writing, even tho it can get a bit exhausting. If you are a fan of his characters and the world, you will get your money's worth. Nonetheless, I have to admit, that this one was kind of unnecessary. It could have just been part of book six and eight and it probably would have worked out better, because he would have had more story and did not need to create a lot of useless filler material.

I recommend this book to fans of the sword of truth series, everybody else should probably stay clear and start with &quot;wizard first rule&quot;.

The performance by Jim Bond is really nice as always, even tho I think there could be a bit more variety in the voices of the characters. (check out Mark Thompsons performance of &quot;Heir to the empire&quot; for an example).