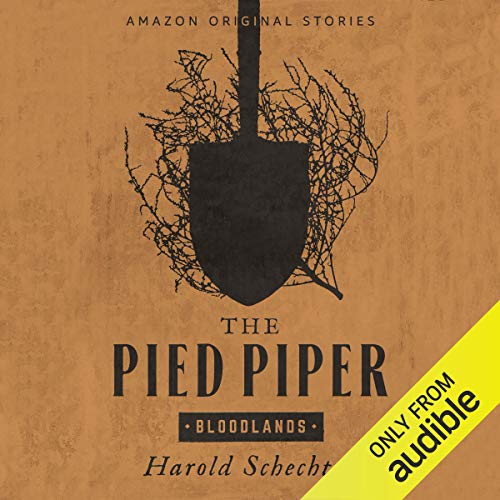 With makeup and an affected Elvis pout, Tucson’s Charlie Schmid was a crude parody of a bad-boy heartthrob. In 1964, he still had a hold on girls who’d follow him anywhere. He murdered three of them.

It was the dawn of the free-love movement - perfect for a magnetic madman who’d also foreshadow its end a few years later in the malignant charisma of Charles Manson. The inspiration for a classic story by Joyce Carol Oates, Schmid, the most bizarre serial killer of any era, was the epitome of a narcissist flattered into believing he could get away with murder.

The Pied Piper is part of Bloodlands, a chilling collection of short addictive historical narratives from bestselling true-crime master Harold Schechter. Spanning a century in our nation’s murderous past, Schechter resurrects nearly forgotten tales of madmen and thrill-killers that dominated the most sensational headlines of their day.

and I'd listen to it! These American crime stories are fascinating, and most I've never even heard about. Weber does another great job narrating, he also narrates Stephen King to, which is phenomenal!

I have very much enjoyed the true crime books by the author, all very engrossing and well written, so when I saw this, (one of a series of short true crime stories) and saw it would be free + included in my Audible membership, I just had to grab it for my library. Under 2 hours long, it was an easy, 1-session listen. Narrator has a pleasant voice, and good pacing, doesn't drone on or use a monotone. Story itself is very interesting and engaging, my only issue with it is the frequently condescending discriptions of the main people involved (example, calling Ms French a 'dumpy high school dropout', and a few other less-than-generous descriptions of other girls and of one of the boys). I'm not usually judgemental about the way people describe other people, but I have seen documentaries about this case before, and I have seen pictures of these girls, who are in NO WAY WHATSOEVER as he describes their physical attributes. ('dumpy', 'a skinny tramp', 'a plain, mousy girl, who made up for her deficiencies in appearance with a puppy-ish devotion', 'a weedy, asthmatic little runt' ) He does the same thing, in reverse, for one of the victims, exaggeratedly overstating her looks in positive terms (' prom queen type looks' etc) . My personal opinion is, it is authorial intent to make the 'bad guys' (and gals) in this case look worse, uglier and utterly non attractive. He didn't really have much to say in positive terms about anyone involved with this case who was not one of Schmidt Jr's victims. I'm not saying in any way that these people who fell under Schmidt Jr's spell should be held up as examples or exemplified in any way, I'm just pointing out something that made an impression on me, because I have seen photos of the people involved in this case. While writing tactics like this are great in the world of fiction, I feel it doesn't have a place in relating something that really happened, to real life people. In reality, not every villain is ugly or undesirable, not every victim is a beauty queen. More realistic descriptions of the person's involved in this would improve the narrative, in my opinion. Otherwise, no complaints at all, I very much like the author's 'voice' and the chosen narrator performs well. Just the author's name on the cover is enough to get me to use a credit on one of his books, I was lucky this series was available to me for free. The others in the series are good too, the first one I listened to in the series was 'Little Slaughterhouse on the Prarie', about the murderous Bender family.

Very good for an hour story. Steven Weber was great as always. I am liking this series.

Great Read, even Better when Listened to.

Love being able to listen or read this book/audio. Very informative and the narrator carries the story along at an excellent pace. While part of a series, any one of these books/audios can be read/listened to un any particular order as each one is a standalone with a common thread (killers). Note: I read & listened to this Series for Free as part of my Amazon Prime Membership.

Charles Schmid, the Pied Piper of Tucson, was a serial killer and a very odd, creepy narcissist to boot. That may sound strange, but I have never understood how he attracted friends, girlfriends, criminal helpers, and people who covered up for him. Looking at mid-20th Century serial killers, his oddness makes him stand out. This book, performed by Steven Webber, is a great listen for a short drive or while doing tasks at home--it is just over an hour long. The author does a great job of creating a portrayal of this killer, his victims, and the people around him. Webber does a fantastic job of performing. If you like true crime, or have recently read Joyce Carol Oates' short story, "Where Are You Going, Where Have You Been?", you will want to listen to this. And if you have never read the Oates' story, which is based on this case, you should do so after listening to this (or just read it anyway--it is a classic). Recommended!

It was well read and written. felt like listening to a TV show about old crimes.

I am enjoying the bloodland collection! this is my fourth book of the series. I really like the little bits of history you get in each story.

I had never heard of the Pied Piper of Tucson before this. Very interesting series.

The Lord Piper by Harold Schechter brings the reader along on another trip down a bloody history lane. This book covers criminals that attract followers then convince those followers to help commit murder. Lots of detailed information on cases in here.

This is a fascinating series. I have enjoyed all of the stories I have listened to. I highly recommend!