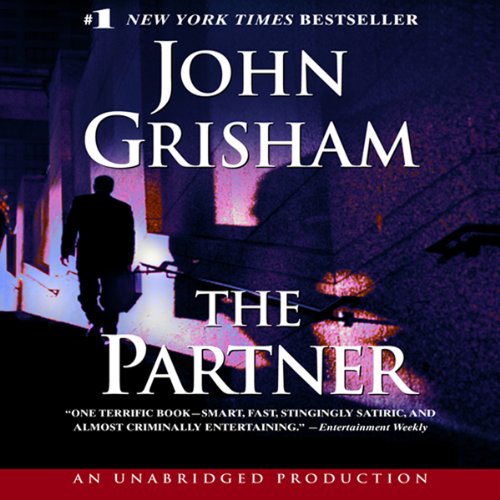 They watched Danilo Silva for days before they finally grabbed him. He was living alone, a quiet life on a shady street in a small town in Brazil; a simple life in a modest home, certainly not one of luxury. Certainly no evidence of the fortune they thought he had stolen. He was much thinner and his face had been altered. He spoke a different language, and spoke it very well. But Danilo had a past with many chapters. Four years earlier he had been Patrick Lanigan, a young partner in a prominent Biloxi law firm. He had a pretty wife, a new daughter, and a bright future. Then one cold winter night Patrick was trapped in a burning car and died a horrible death. When he was buried his casket held nothing more than his ashes. From a short distance away, Patrick watched his own burial. Then he fled. Six weeks later, a fortune was stolen from his ex-law firm's offshore account. And Patrick fled some more. But they found him.
©1997 John Grisham (P)1997 Bantam Doubleday Dell Audio Publishing, Bantam Doubleday Dell Audio Publishing, A Division of Random House Inc.
Juridique
Afficher plus Afficher moins

This is a incredible story, I thought I had it figured out. The end was a big surprise but certainly poetic justice. Someone complained about the narrator, so I was looking to critique, but frankly I enjoyed him very much.
Great book.

Would you consider the audio edition of The Partner to be better than the print version?

Read the print version some years ago and really enjoyed it. I really enjoy audio, and normally, good narration enhances my appreciation of a really good book. In this case I think I prefer the printed page.

Grisham is a master, perhaps the master, of legal/suspense genre. I find all of his works enthralling and I appreciate that he avoids the turn-off (for me) of graphic sex and bad language.

Frank Muller is an excellent narrator except for one thing. He obviously has never spent much time below the Mason-Dixon Line. He manages to grossly mispronounce almost all of the prominent place names on and near the Mississippi Gulf coast. I cringed every time one his southern characters said Biloxi as if it rhymed with "foxy." (It's "Bu-Luxi"). Mobile is pronounced with the accent on the last syllable, not the first. I can understand missing on Pass Christian, (accent on last syllable) but hasn't there been enough coverage of hurricanes over the years that everyone should know how to pronounce Lake Pontchartrain?
This is not just a matter of a chip on my southern shoulder. Think Pierre, South Dakota or Cairo, Illinois. I just think a little research by Audible producers and narrators would enhance what is already an excellent experience.
Ok, I feel better now.

No, my rant is over.

What did you love best about The Partner?

As usual, a good plot, lovable and despicable characters, and a good pace.

I like John Grisham's attention to detail, which makes his stories more plausible than maybe they SHOULD be! I get annoyed when, as I'm reading or listening to a book I find myself saying "but that doesn't make sense! He/she could've just....", or "that's so far-fetched - no one would ever do that!", or "come on - that's just WAY too much of a coincidence..." Grisham never makes me question plot points.

Which character – as performed by Frank Muller – was your favorite?

The main character, Patrick/Danilo was my favorite. Grisham always does a great job of developing his main character and makes you root for him - even if you suspect he might be a "bad guy".

There was a moment that moved me to profanity, but I can't reveal that moment hear, as it would spoil the book for future listeners.

I almost hate to admit my love for John Grisham's books, because they are USUALLY - ultimately - predictable. But by the time the prediction comes true, I am so fully invested in the story, I'm relieved that the story resolves as I'd hoped. Note the emphasis on usually...

Hold on to your hat because this is riveting.
The narration is wonderful; Mr. Muller is the best at holding one's attention. He's been accused of being too 'breathy' and perhaps there's some truth to that in earlier readings but that's not the case here. He makes me feel that he's as spellbound as I.

I thought this book was fantastic!. Twists &amp; turns, mystery galore, fast paced &amp; a big lesson in patience The ending just blew me away. What I came away with was Be Careful what you wish for, Careful what you plan for &amp; be absolutely flexible in life.

Ok, when I first starting listening to the narrator I thought he wasn’t going to be good. Then somewhere in the story I thought he was great. I could easily tell which character he was playing. Great story - twist and turns. I like it when I can’t figure out which way the story is going to go. I highly recommend.

In this book the author takes us through a devious plot so well crafted that you find surprises on allmost every second page.
The narrator is crystal clear and the slight variation of accent and tone makes it very easy to follow even for someone who has not got English as their first language.

One of Grisham's best in years

I enjoyed every minute of this book! From the moment of meeting Silvo, to slowly finding out how he had morphed from Lanigan. Very interesting in every way--discovering how he handled the mob, the FBI, and his fat-cat cheating fellow lawyer partners. The best part was the ending! Won't say more because don't want to give it away.

Loved The Story, Hated The Ending!!

This is a story about a suspected murder, vanishing acts, thieves, and a double cross. It is a story about a law firm filled with thieves. And, of course, the disappearance of millions of dollars, along with one of the partner
.
I enjoyed the story very much but the ending was horrible .... the double cross, which I had suspected early on. What was more horrible was that Grisham did not explain or give us a reason or explanation for the double cross. Of course, we know it was all about the money but something - anything - from the double crosser's point of view maybe would have helped me accept and understand the ending.

The main character had a "brilliant mind," he had everything well thought out, he had dotted every "i" and crossed every "t" so why would he entrust his stolen "millions" to a woman he had known for less than 4 years. Why would he put his millions in the name of this woman and trust that greed would not overcome her. Was he blinded by love? Maybe there is going to be a second book (?) hope so.... I felt deceived.....

I really did enjoy the story and loved the energy of intrigue Frank Muller's performance brought to the story.

Frank Muller was the best. I miss his narration. I fill with excitement when i find a book that he performed that I have not heard yet.

Great book until the last 5 minutes

Beginning was slow and brutal. Middle was great. Ending not in line with the characters. That ruined it for me.