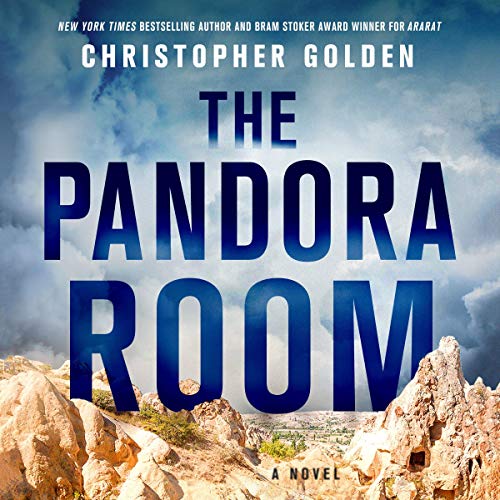 The Pandora Room is New York Times best-selling author Christopher Golden’s chilling exploration of what happens when the original Pandora's box is discovered in an ancient subterranean city, stirring international conflict and exposing the archaeological team to curses, whispers, and the terror of a legendary plague.

In one ancient variation on the myth of Pandora’s box, there were two jars, one for Pandora and one for her sister, Anesidora. One contained all the blessings of the gods; the other all the world’s curses. Now, in a subterranean city in Northern Iraq, archaeologist Sophie Durand has discovered a secret chamber covered in writing that confirms that version of the tale - a chamber that contains a single jar.

“Weird shit” expert Ben Walker joins Sophie’s team just as the mystery deepens and grows ugly. Those who believe the myth want to know which jar has been found in the Pandora Room, the one containing blessings or the one full of curses.

Governments rush to lay claim, but jihadi forces aren’t waiting for the dust to settle. Whatever the jar contains, they want it, no matter who they have to kill...or what will emerge when they open it. For Sophie, Walker, and the others, the Pandora Room may soon become their tomb.

"Here is a master storyteller at his finest. Brilliantly told, arcanely crafted, with an ending that chills the marrow of your bones.” (James Rollins, New York Times best-selling author of The Demon Crown)

"The Pandora Room is a marvelous collision of adrenaline-fueled plotting and graceful writing.... This hybrid of high adventure, supernatural thrills, and all-too-plausible chills is a wonderful, wild ride.” (Michael Koryta, New York Times best-selling author of How It Happened and If She Wakes)

I enjoyed this book and author. if you've not read Ararat do yourself a favor and get that book by this author!

What an awesome ride!

Great story! Characters you can connect with. A touch of history with a bit of mythology and spectral terror.

Christopher Golden does it again!

I read Ararat and loved it. I listened the Pandora Room because Ben Walker was returning from the previous story. I really enjoyed this story as well. I will definitely find more books from this author.

I looked forward to this book throughout the pre-order only to find that I cared little or nothing if any of the characters survived. What a bunch of navel-gazing, narcissists.

Ararat (book 1) is fantastic. Pandora Room (book 2) starts slowly, improves in the middle and just ends. It doesn’t have a satisfying denouement.