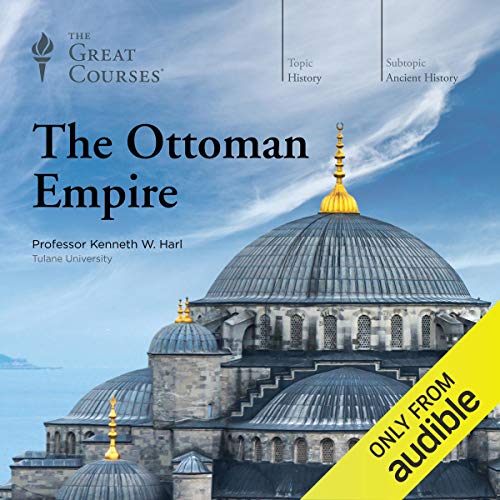 By understanding the dramatic story of the Ottoman Empire - from its early years as a collection of raiders and conquerors to its undeniable power in the 15th and 16th centuries to its catastrophic collapse in the wreckage of the First World War - one can better grasp the current complexities of the Middle East.

Over the course of these 36 enlightening lectures, investigate over 600 years of history that covers the nature of Ottoman identity, the achievements of the Sultan's court, and stories of confrontation and cooperation with the West.

Befitting a story of such epic scope and grandeur, every lecture is a treasure trove of historical insights into the people, events, themes, and locales responsible for shaping the story of this often-overlooked empire. You'll cover everything from Rumi, the whirling dervishes, and the importance of the sultan's grand viziers to the wars of Sultan Suleiman I, the shadowy politics of the Committee of Union and Progress, and the birth of the Turkish Republic under Kemal Atatürk.

Welcome to a fascinating story of the triumph and tragedy, war and peace, intellectual progress and civil insurrection of a great empire that, for all its glory and grandeur, has left an important legacy that will shape the future of the Balkan nation-states, the Turkish Republic, and the Arab world - and those of us in the West as well.

Another A++ series from Prof. Harl!!!

I’d give it 7 of 5 stars if possible. It is superbly organized. It’s terrific to see history unfold from the Ottoman viewpoint. I think it corrects for conceptions of the modern Muslim-majority nation state that is too frequently projected into the past. The course is very helpful in thinking about the Balkans and the lead up to WW1.

I appreciate Prof. Harl most when he’s focused on Antiquity through the Middle Ages, where his style is to tell us what the literary sources say – what the archaeological record (so far) tells us – the relevant ancient anecdotes and excerpts (from Herodotus, Plutarch, Livy) that make history interesting – a few jokes of his own – and then maybe a few comments on the current “state of scholarly debate,” or where he has a bias with which other history profs may disagree.

To contrast, some very good lecturers get too bogged down in what various historical “schools of thought” say about a subject (Fagan, others). Others get too cute in trying to weave a continuous narrative and leave out too many details (Fears, Garland). A few bad apples start with a sociological point of view, and try to read that back into time by cherry picking incidents that support it (Dise).

Harl’s lectures are authentic and flow naturally, without any gimmicks. His mastery of the material is obvious. I have listened to all 11 of his courses, most more than once, and he’s simply the best. I would love to see him do a deep dive on the Iranian plateau – Persians though Seleucids, Parthians, Abbasids, etc. That has yet to be covered in detail by a lecturer of Prof. Harl’s caliber.

Some interesting parts but ...

Although there are some good parts on this and is at times an interesting story to listen to, the author takes a &quot;bold&quot; pro-Ottoman side in crucial humanitarian issues like the Armenian and Greek genocide. As himself states early in the book, his wife is Turkish, I am afraid this has prevented him for keeping a more neutral stand in these depressing pages of human history. Overall, a disappointing purchase.

I enjoyed every other series Professor Harl has made, but this one was sub-par. I found myself wondering why he was really hitting hard on the positive stuff about the Ottomans and downplaying the negative, when what I'd admired about his other lectures was the relatively unbiased approach. They weren't apologies but they weren't condemnations either, it was simply history. This series really felt like an op ed piece at times, and Harl often exhibits doublethink (ex: denies that the Armenian genocide occurred because it doesn't fit the UN definition of genocide, but then dismisses the German govt's acknowledgement of the genocide since he "doesn't think politics should play a role in deciding what actually happened"). Once he said he has a Turkish wife though, it started to make sense. There's still some good information in the course, if you don't mind that he glosses over some of the more gruesome aspects of Ottoman society, like how the Janissaries were kidnapped and forcibly circumcized, or the fact that he never really explains that whole silk cord thing or any of the cultural background in which such practices emerged.

That being said, I don't think this course is worth purchasing, you could get all this information on wikipedia and you wouldn't be missing out on any thing really. The most interesting part of the narrative is whenever Europeans enter the scene and Harl has plenty of other quality courses on those subjects, like The Era of the Crusades, World of Byzantium, and Great Ancient Civilizations of Asia Minor.

This is an magnificent set of lectures!

I have listened to most of Professor Harl's lectures given by the teaching company through Audible, not to mention that I have listened to some set of lecture more than one time. I can say that I am very grateful for these lectures as they are very informative, interesting, engaging, and (to use the adjective Mr. Harl uses to Süleyman the Magnificent) magnificent, which is a word I rarely use to describe something.

I have moved to Turkey about 6 months ago, and with the help of this course on Othoman Empire (even if I don't prefer to call it so) I was able to understand people and thing s happening around me. What I really liked though is Professor's Harl great effort to combine sources from the East and West seeking understanding some of the most controversial aspects of Othoman history.

What I also like is the organization of this set of lectures in a way that has allowed me to understand the most important dates, events, turning points, and more in Othoman history and a little beyond :)
I highly recommend it!

Good clear sum-up of the history for anyone who wants understand this period in time.

A good distinction is made about why this empire was not "Turkish" or Arabic, but Muslim.
Also, provides good background about the modern day conflicts between Serbia and Bosnia.

If you seek a rosy history of the Ottomans, download this now! His chapter on the Armenian Genocide is dominated by whether it should be labeled as a &quot;genocide&quot; and not the fact that it was an atrocity - by any definition. It sure comes off as an apologist take on the event. And it happens to be one of the few negative parts ever discussed in 18 hours covering 500+ years of Ottoman history. Even during downtimes of the empire, Harl always points out the positives over any negatives. It came off as very biased.

Really enjoyed the narrator. This is a long series of lectures - took several weeks for me to finish. However, I enjoyed all the time spent. Really enhanced my understanding of an important part of the world.

What was most disappointing about The Great Courses’s story?

The obvious bias of the author saying thing like "The orthodox christian nations of the Balkans should be grateful to the Ottoman empire for saving their identity..." and justifying the Armenian genocide with the fact that some Arminian held important positions in the empire and the Armenian church was protected, calling it "unfortunate event". More of this was to be found throughout the book.

A+ Course by an A+ Professor

Harl is one the greatest professors with the Great Courses. I enjoyed every second of this largely unexplored area of world history.

A solid treatment with some rough edges

Professor Harl covers the facts and broad sweep of this subject with the kind of confident grasp that we expect from the Great Courses. I did find that his diction took some getting used to (many umms and ahhs, with rapid fire delivery) and I found myself wishing he did a better job of tying the raw facts into overarching themes. A note about his treatment of the Armenian genocide: I disagree with a number of reviewers that he presented a Turkish apologia. He did go out of his way to clarify the Turkish perspective of the events, which I took to be an important scholarly service. Overall, recommended.

A good insight to Ottoman history

As a history enthusiast from Turkey, I would recommend these lectures. They give a very good insight to the Ottoman history. For my taste, some aspects such as the weaknesses in written literature and scientific work also the motives of the reforms in the Turkish Republic could be described more in detail, but again it is my taste. Plus, these broad topics could have been a lecture on their own. I know turkish is hard, nonetheless my objective critic is that the pronunciation of some names were not good enough. Furthermore, I would really like to hear some references to turkish historians. Overall, it was a great journey for me, even though I was very familiar with the content. I find the lectures to be as objective as it gets for all the controversy it carries. I thank Prof. Kenneth W. Harl for this great set of lectures. Ismail Kuru

truly worth it. it's one of the best courses I have ever attended. I'm deeply grateful for learning so much. thanks

Informative and important! As always Prof Harl has created an awesome course. I will most definitly hear these lectures again.