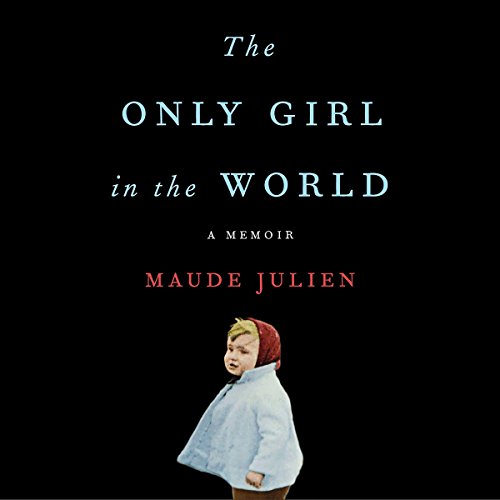 The Only Girl in the World

For listeners of Room and The Glass Castle, an astonishing memoir of one woman's rise above an unimaginable childhood.

Maude Julien's parents were fanatics who believed it was their sacred duty to turn her into the ultimate survivor - raising her in isolation, tyrannizing her childhood, and subjecting her to endless drills designed to "eliminate weakness". Maude learned to hold an electric fence for minutes without flinching and to sit perfectly still in a rat-infested cellar all night long (her mother sewed bells onto her clothes that would give her away if she moved). She endured a life without heat, hot water, adequate food, friendship, or any kind of affectionate treatment.

But Maude's parents could not rule her inner life. Befriending the animals on the lonely estate as well as the characters in the novels she read in secret, young Maude nurtured in herself the compassion and love that her parents forbid as weak. And when, after more than a decade, an outsider managed to penetrate her family's paranoid world, Maude seized her opportunity.

By turns horrifying and magical, The Only Girl in the World is a story that will grip you from the first minute and leave you spellbound, a chilling exploration of psychological control that ends with a glorious escape.

"A disturbing, engrossing memoir.... A startling testament of survival." ( Kirkus)
"This is not the umpteenth book about a miraculously saved victim. It is much more, and much better.... One of the most fascinating things about this memoir is the extraordinary resistance Maude developed...her ability to create a world for herself." ( Le Journal du Dimanche)
"A harrowing yet achingly beautiful tale of a girl imprisoned by her brutal, fanatic family, but whose yearning for wonder and love ultimately drives her toward the improbable light of the world.... The Only Girl in the World is a story of resilience unlike any I have ever read." (Mira Bartók, author of the National Book Critics Circle Award Winner The Memory Palace)

Difficult to Express How Much I Recommend This Boo

Would you listen to The Only Girl in the World again? Why?

I would listen to this book again - if only to try and understand how Maude Julien is able to put us so firmly into her shoes, make us feel everything she feels, and then rescue us with her own courage before I am exhausted and terrified.

I apologize for the following ramble:

This story is incredible, not just because of its poignant writing, provocative situations, and extensive depth, but how even as I describe it, there is little I can say to express the life the author has lived.

In The Only Girl in the World, we are transported into the mind of a little girl, her emotions and her thoughts conveyed with great clarity and vision. Her telling is simple and direct, but creates situations that will make you feel the incredible pain, anger, confusion, and fear she does.

Maude Julien successfully dances on an incredible line of putting the audience as both child and observer. As we are older than the narrator, I find myself forcing my mind away from the young narrative in order to imagine the perspectives of the others in her life, which Julien aptly describes with her striking descriptions and dialogue.

We watch a child mature under oppressive manipulation with incredible strength.

I listen as I am let to make my own decisions on every family member and outsider that crosses this girl's path, and am overjoyed with her as she escapes, not with a brilliant escape or violent crash - but with pure determination. It takes my breath away.

Which character – as performed by Elisabeth Rodgers – was your favorite?

Elisabeth Rodgers is a brilliant narrator - she characterizes ever person perfectly. Minute changes in her inflection and tone make distinct personalities that never once seem out of place. When I hear the Father - I heard Elisabeth Rodger's version, so distinctly, even after it is over. Her way of showing Maude Julien's inner thoughts are full of subtle emotion, perfect in every situation.

I listened to it in 2 days. It was amazing.

Not for the faint of heart

struggled to finish. she had a horrific childhood, but it was very hard to hear as a parent.

First time writing a review but this book deserves it. This story is unbelievable, I couldn’t stop listening and was soooo sad when it was over. My favorite type of books are memoirs so if you like them too you should buy it.

Maude Julien’s memoir, The Only Girl in the World, is an impeccably written, beautifully narrated first-person account of hope, strength, and perseverance that is incredibly difficult to listen too. I found this book to be much like a car crash—I knew I shouldn’t look but I couldn’t look away. It was a captivating, disturbing, and ultimately inspiring tale.

Written from Maude’s perspective as a young girl, The Only Girl in the World takes readers and listeners back in time to a time period between the First and Second World Wars, when her father, Louis Didier, became enamored with Nietzsche’s theory of Ubermensch. The novel begins with a bit of backstory, as Maude explains that she was not her father’s first or only victim. In 1936, her father, convinced that he could raise a superhuman, if the child was “properly physically, mentally and emotionally trained from birth,” persuaded a young impoverished couple from Lille to relinquish custody of their daughter, Jeannine, to him. He promised them that Jeannine would have a comfortable, financially stable life, complete with a university-level education, under one condition: they would never see her again. Twenty-two years later, Jeannine gave birth to Maude and the second phase of Didier’s plan begins.

Didier soon isolates his wife and young daughter, moving them to a large, remote home in Northern France, limiting their exposure to outsiders, restricting their access to news and information, and strictly controlling their few excursions into the real world. The telephone, for example, is in a locked box and radios are strictly forbidden, outsiders are limited to tutors, construction workers, groundskeepers, and guests of her father, and Maude’s only friends are the animals who live within the walled lawns of the estate.

Through young Maude’s eyes, we pass through the gates and see behind closed doors, joining Maude as she experiences unthinkable pain and suffering at the hands of her parents. After years of “willpower training exercises,” long bouts of silent treatment, strict discipline and carefully controlled education, it’s amazing to hear how hopeful Maude remained, and how her small rebellions, each act of passive-disobedience, allowed that hope to stay alive. As the story progresses, Maude grows and so does her determination. Her escape isn’t a climatic suspenseful Hollywood type escape but the sense of relief I felt was palpable and in no way diminished the stories resolution.

The Only Girl in the World is a fascinating account of the trauma and abuse Maude endured as a child that is as painful as it is uplifting. Her story is horrific and the pain she survived is difficult to comprehend but Maude’s resilience and sheer determination not only to survive but to escape was simply awe-inspiring

One of the best memoirs I have ever read. Perfect narration!
I would like to know more about the demented father. Perhaps another book will be written.

Maude’s well-written story is disturbing, heartbreaking and captivating. I was amazed at her ability to maintain compassion, hope, and sanity through such bizarre cruelty. Her life is a testament to the human spirit. There were times I wanted to stop reading, not because it was not a compelling book, but because it was difficult to hear. However, I could not stop. I continued partly because I believe she deserves to be heard and mostly because I wanted to know how she escaped and how she survived. The narration is brilliantly done. This book is in a category of its own.

This was disturbing but well written. I’d love to hear more explanation of what was actually mentally wrong with her father. It feels a bit voyeuristic because it’s listening to hours of torture and brainwashing. It is definitely worth the time to hear this strong woman’s story.

Was slow getting into this book, but once I began to understand the author and the authenticity of her emotional upbringing, I was truely engaged and appalled. Her life is unique and astounding, and her strength and perseverance through it all is not only admirable, but astonishing. Well written recollections help bring the reading inside the world of Maude and her journey to freedom. HIGHLY reccomend.

The point of this story eludes me. It is a long and somewhat tiresome account of the real-life Maude Julien and a recitation of the dreadful events that occurred during a portion of her life. There is little spirit or energy put forth in this story -- really, just a monotonous narration of events -- and there is scant background into any of the characters, good and bad, to help us connect the dots of her life. The narrator did a nice job, but there are a myriad of excellent stories regarding child abuse already published; there is no need to waste your time and money on this one.

It took me several months to finish. Tough story & Emotionally Jarring. Not a light read while commuting.