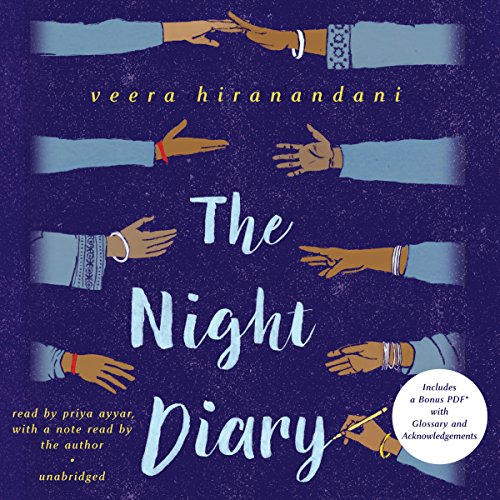 In the vein of Inside Out and Back Again and The War That Saved My Life comes a poignant, personal, and hopeful tale of India's partition and of one girl's journey to find a new home in a divided country

It's 1947, and India, newly independent of British rule, has been separated into two countries: Pakistan and India. The divide has created much tension between Hindus and Muslims, and hundreds of thousands are killed crossing borders.

Half-Muslim, half-Hindu twelve-year-old Nisha doesn't know where she belongs or what her country is anymore. When Papa decides it's too dangerous to stay in what is now Pakistan, Nisha and her family become refugees and embark first by train but later on foot to reach her new home. The journey is long, difficult, and dangerous, and after losing her mother as a baby, Nisha can't imagine losing her homeland, too. But even if her country has been ripped apart, Nisha still believes in the possibility of putting herself back together.

Told through Nisha's letters to her mother, The Night Diary is a heartfelt story of one girl's search for home, for her own identity...and for a hopeful future.

"This rich, compelling story, which speaks to the turbulence surrounding India’s independence and to the plight of refugees, should be in all libraries." (School Library Journal, starred review)

“Nisha's sweet, sheltered world disappears overnight when her country splits in two - now Hindus must live in India, Muslims in Pakistan. But Nisha's both. Where can her family be safe? Hiranandani's story is set in an historical time little known to American children, but she tells it in a way that makes it accessible, timely, interesting, and real." (Kimberly Brubaker Bradley, author of Newbery Honor-winning The War That Saved My Life)

"The diary format gives her story striking intimacy and immediacy, serving as a window into a fraught historical moment as Nisha grapples with issues of identity and the search for a home that remain quite timely." (Publishers Weekly)

"Believable and heartbreaking...A gripping, nuanced story of the human cost of conflict appropriate for both children and adults." (Kirkus Reviews, starred review)

This book pulls you in, through the diary format you learn the intricacies about Nisha and her family. You follow them from the boring day to day life of a child in India. Then the unthinkable happens, India and Pakistan separate, forcing Nisha's family to have to move from Pakistan to the new now smaller India. Their journey is rough, the twists in the story make you want to reach out and save Nisha's family. The narrator pulls you in closer and you're right there in the plot twists and turns. You can feel the thirst from running out of the water, you can feel how while it's the rainy season there is no rain. Then the clouds opened up. You can feel the fear when her father discovers Nisha talks to a neighbor in their safe place of their uncle's house. The fear that drives them to keep moving, find the train and save his family. The second part of their journey is just as hard as the first, fearing for their lives on the train. Your emotions well back up and you want to physically help again.
The ending didn't go how I was expecting, which is good considering how it felt it would end. This book is so real, it's feelings so raw and really it's fantastic.

Compelling mg story. I admit it frustrated me a lot of times, as a 12 yr old girl is the narrator of this story and children tend to not understand the full weight of such heavy situations adults don’t often question.

The partition of India and Pakistan being told as a current event and not as a historical event was interesting, but also traumatic as it was one of the biggest migrations in history recorded.

I can’t imagine what it’s like to be around one country becoming two overnight, so I understood the mc’s confusion as for all her life Muslims, Sikhs and Hindus lived side by side, though perhaps she was too young to understand there was a lot of tension there too. She had obvious answers to complicated scenarios, As she was innocent and naive and her twin brother and she often did things on their journey from the new Pakistan to the new India.

I think the only thing I didn’t like about it was the glorification of ghandi, but he wasn’t a figure who was seen as flawed as we see him now, so I get it.

I loved the authors note at the end, as it made me feel the author had a rich history that inspired the plot of this fictional story.

Beautifully written, beautifully performed. First time in years a novel has moved me to tears.

This book Is great I really want you to buy it only cost one credit. so I like how they have their emotions and happy feellings

Heartwarming book that you must read!

This book was absolutely amazing I would suggest this book to anyone and everyone it is truly amazing and heartwarming.

this is such a good book! at first i wasn’t into the style but it definitely grew on me! SO WELL WRITTEN!!!

This book had the calming voiceactor and story I l

beautiful I loved the vouce actorr along with the story... a perfect bed time story if you're into that stuff!

The story itself was fantastic. I had to read it for school. The performance and the voices really brought me closer to the characters. I didn’t like how it really got good halfway through the book and if I was reading this I would have liked it to progress and get excited sooner. Overall I loved the book and you should definitely read this.