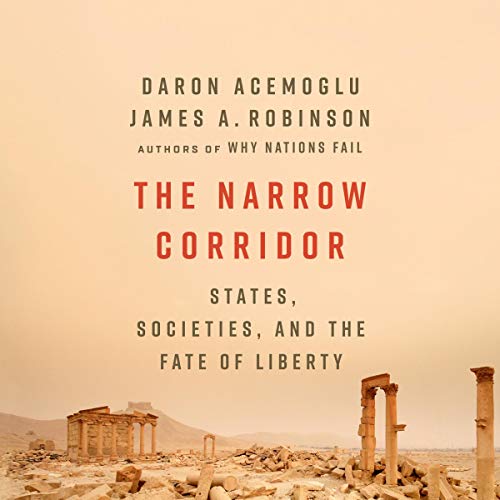 From the authors of the international best seller, Why Nations Fail, a crucial new big-picture framework that answers the question of how liberty flourishes in some states but falls to authoritarianism or anarchy in others - and explains how it can continue to thrive despite new threats.

Liberty is hardly the "natural" order of things. In most places and at most times, the strong have dominated the weak and human freedom has been quashed by force or by customs and norms. Either states have been too weak to protect individuals from these threats or states have been too strong for people to protect themselves from despotism. Liberty emerges only when a delicate and precarious balance is struck between state and society.

There is a Western myth that political liberty is a durable construct, a steady state, arrived at by a process of "enlightenment". This static view is a fantasy, the authors argue; rather, the corridor to liberty is narrow and stays open only via a fundamental and incessant struggle between state and society. The power of state institutions and the elites that control them has never gone uncontested in a free society. In fact, the capacity to contest them is the definition of liberty. State institutions have to evolve continuously as the nature of conflicts and needs of society change, and thus society's ability to keep state and rulers accountable must intensify in tandem with the capabilities of the state. This struggle between state and society becomes self-reinforcing, inducing both to develop a richer array of capacities just to keep moving forward along the corridor. Yet this struggle also underscores the fragile nature of liberty. It is built on a fragile balance between state and society, between economic, political, and social elites and citizens, between institutions and norms. One side of the balance gets too strong, and, as has often happened in history, liberty begins to wane. Liberty depends on the vigilant mobilization of society. But it also needs state institutions to continuously reinvent themselves in order to meet new economic and social challenges that can close off the corridor to liberty.

Today we are in the midst of a time of wrenching destabilization. We need liberty more than ever, and yet the corridor to liberty is becoming narrower and more treacherous. The danger on the horizon is not "just" the loss of our political freedom, however grim that is in itself; it is also the disintegration of the prosperity and safety that critically depend on liberty. The opposite of the corridor of liberty is the road to ruin.

Includes a bonus PDF of the maps and figures from the book.

One of the Financial Times' Best Books of 2019

One of Kirkus Reviews' Best Books of 2019

Shortlisted for the Lionel Gelber Prize

"What explains the rise and fall of democracy and dictatorship?... [Acemoglu and Robinson] offer a provocative framework for analyzing our current moment of democratic crisis.... A powerful starting point for understanding the many perils facing aspirations for democracy and liberty today...helpfully recalibrates our American tendency to collapse debates over freedom into a binary clash between the narrow liberty of ‘free markets’ on the one hand, and the economic and political freedoms provided by social-democratic ‘big government’ on the other.” (The Washington Post)

“Crucially and rightly, the book does not see freedom as merely the absence of state oppression.... This book is more original and exciting than its predecessor. It has gone beyond the focus on institutions to one on how a state really works.” (Martin Wolf, Financial Times)

“A work of staggering ambition - aiming to explain why liberty has or has not existed at every moment in time in every geography in the world.... It is chock full of delightful detours and brilliant nuggets.... Smart and timely.” (Newsweek)

This books tempts readers with an interesting idea based on Hobbes’ Leviathan. However, it is nothing more than a simplistic promotion of political correctness, identity politics and arguments supporting a continued growing state.

The authors do not like Hayek, but anyone tempted to read this book, would do much better reading Hayek and particularly his “The Road to Serfdom”.

The authors pretend to support free market economics, however, they don’t like the price mechanism of free markets and suggests it lacks the “political”element of pricing. This alone undermines the whole fabric of the free market and the authors happily ignores this.

They happily salute the Swedish model and describes elaborately in much too great detail what happened up to 1976 in Sweden, and they do so with great fanfare. Unfortunately, that was the time when Sweden entered its worst economic recession which sacrificed economic growth and jobs. Is that really a model to emulate?

Why Examples like these are such models for emulation is very hard to understand.

The American Constitution equally gets an unfavorable mention. In particular the treatment of the slavery issue is superficial and distorted. Slavery is obviously an incredibly issue in America’s history. It is completely,ex and does not benefit from superficiality. Read Sean Wilentz’ book “No Property in Man” in order to get a far more thorough and thoughtful discussion of slavery during the discussion of the Constitution.

The authors completely ignores the need for reforming education and removing the influence of teacher unions in particular in USA. To increase people’s standard of living and improve freedom of choice can only happen with far better education at all educational levels. Unfortunately, this takes time, but the longer society waits the longer and further children will fall behind in the USA.

This book is a waste of time and hugely disappointing.

I read “Why Nations Fail” and loved it. Thought it was unique and innovative. This felt very derivative to that work and the case studies didn’t add much. “Why Nations Fail” really described what the Narrow Corridor is - a good balance between state and the people - and how it helped nations succeed or fail if you were out of that corridor. This seemed to cover more examples to support the work they already had written about.

The Narrow Corridor provides a simple, but powerful model for thinking about the world. Makes me want to re-read Fujiyama's two books about the origins of power and political order. in a world of increasing closemindedness, and political nostalgia, we need books like these that can open your mind.

Difficult book to get through.

It was a difficult book to get through but one of the most informative and educational book on the history of governments. I always believed that it was propaganda labeling a particular country communism socialism or capitalism. This book points out why they should not be labeled as such, it explains a whole different way to look at an understand government.

The authors present a theory of societal development. Their work is long on anecdotes, and short on statistics. Therefore, their thesis rests on very thin evidence.

To take one example of their methodological sloppiness, they make a case that India has been held back by the Hindu caste system. Okay, so let's look at Pakistan and Bangladesh, two countries that are culturally similar, but are Muslim, therefore without the Hindu caste system. They should be doing much better than India in terms of economic and political development. But they're not. So is the caste system really at fault? Most authors have identified the "license raj" as holding back India's development. The authors do not even touch on this alternative theory. I get the feeling that the authors are so in love with their theory that it hasn't crossed their minds that they must confront alternative models.

Does their theory have any predictive ability? When you push away the verbiage the answer, to my eye, is no. How nations develop seems to depend very much on chance, and even on the particular individual(s) in charge at a given moment in time.

There are some interesting historical nuggets in this book but as a coherent theory of societal development it is unsatisfying.

About 2/3 of the way through the book completely runs off the rails and becomes a simplistic blather of left-liberal platitudes. For example, the authors rail against the "robber barons" without providing a single instance of their supposed misdeeds. Early in the book the authors cite certain tribal societies that punish successful people, for example, a farmer who obtains a better yield by using better agricultural methods. But they are blind to the fact that their own left-ish ideology is replication of this leveling phenomenon applied to modern societies. Their whirlwind tour of modern American history is so simplistic it would be an embarrassment to a comic strip for children.

This is the best and most original book I have read in a long time. Its concept of a "narrow corridor" seems likely to lead to an excellent a priori predictor of the success and failure of nations. The arguments are based on historical analyses but seem to build on the game theory concepts of Bueno de Mesquita's "Dictator's Handbook."

I am once again inspired to understand the world around me and how we can move within the corridor with the undergirding of liberty. I hope all countries can keep the leviathan shackled and advance wellbeing for all.

No country is left unscanned. Takes longer to listen to than the books with the same length..

Highly recommended book. Great performance and lots of insight to learn from. This book is also highly relevant this era

Good with a few blindspot.

First. to refute the several criticisms that it could have been much shorter without all of the examples. this seems absurd. how can you write a book about a historical theory, without historical examples? I found them very interesting, and informative. And they helped clarify his point.

my only complaint is that they seemed to have a blind spot regarding the USA. First, I thought his framing of the Constitutional convention and the development of the bill of rights was uncharatable.

And they had almost nothing positive to say about our founding. For example, the fact that for 200 years the president stepped down voluntarily. This to me is remarkable, and feeds into the framing of the book.

Also, I feel when they get into the minutia of health care policy, it only muddied their point.

Not to say that all the criticisms are unfair. Obviously, our relationship with race is awful and feeds well into the narrative.

All and all, though, Avery good listen.

I found a lot of very good ideas in the text, and in opened my eyes about what factors contribute to a stable democracy ans state. However, the speaker always sounded so exasperated to me, so it took real effort to finish the book