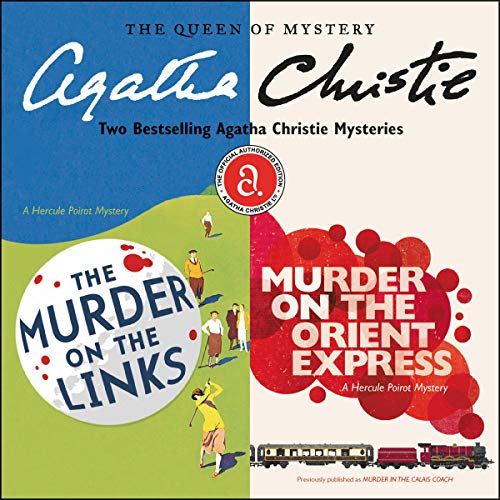 In Agatha Christie's class mystery Murder on the Links, Hercule Poirot attempts to unravel the grisly conundrum of not one, but two dead bodies discovered on a French golf course.

An urgent cry for help brings Hercule Poirot to France. But he arrives too late to save his client, whose brutally stabbed body now lies face down in a shallow grave on a golf course.

But why is the dead man wearing an overcoat that is too big for him? And for whom was the impassioned love letter in the pocket? Before Poirot can answer these questions, the case is turned upside down by the discovery of a second, identically murdered corpse....

The most widely read mystery of all time - now a major motion picture directed by Kenneth Branagh and produced by Ridley Scott!

Just after midnight, the famous Orient Express is stopped in its tracks by a snowdrift. By morning, the millionaire Samuel Edward Ratchett lies dead in his compartment, stabbed a dozen times, his door locked from the inside. Without a shred of doubt, one of his fellow passengers is the murderer.

Isolated by the storm, detective Hercule Poirot must find the killer among a dozen of the dead man's enemies, before the murderer decides to strike again.

2 good ones in 1 package - bonus for 2 narrators

It's so delightful to hear Hugh Fraser speak as Hercule Poirot, and his narration really makes the story come alive for me. Once you get to Orient Express, you'll wonder how Dan Stevens switches so quickly between all the characters -- it's remarkable.

High Fraser is my favorite narrator and I actually prefer his Poirot to David Suchet's- but this was the first that didn't work for me. Maybe it was because he had to do so many different French characters all at once, but his Poirot didn't sound like good ol' Poirot AT ALL. You'll know what I mean when you hear it yourself. It's not really noticeable until a scene where you have 3-4 characters all speaking with accents. Then Poirot gets lost. Several times I had to rewind 60 seconds to make sure Hugh was speaking as Poirot because even though the conversation was Poirot it didn't sound like him at all. I really wanted to like this and am so disappointed