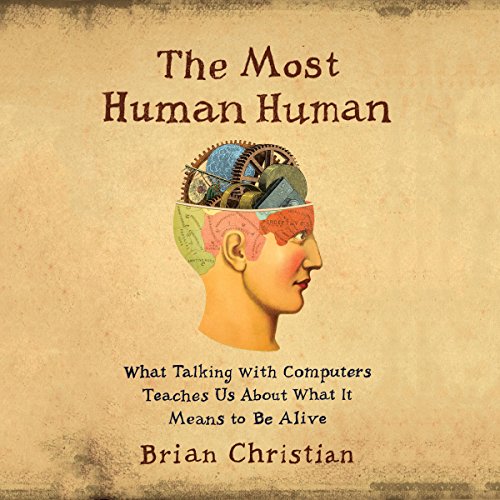 The Most Human Human

The Most Human Human is a provocative, exuberant, and profound exploration of the ways in which computers are reshaping our ideas of what it means to be human. Its starting point is the annual Turing Test, which pits artificial-intelligence programs against people to determine if computers can "think". Named for computer pioneer Alan Turing, the Turing Test convenes a panel of judges who pose questions - ranging anywhere from celebrity gossip to moral conundrums - to hidden contestants in an attempt to discern which is human and which is a computer. The machine that most often fools the panel wins the Most Human Computer Award. But there is also a prize, bizarre and intriguing, for the Most Human Human.

In 2008, the top AI program came short of passing the Turing Test by just one astonishing vote. In 2009, Brian Christian was chosen to participate, and he set out to make sure Homo sapiens would prevail.

The author’s quest to be deemed more human than a com­puter opens a window onto our own nature. Interweaving modern phenomena like customer service “chatbots” and men using programmed dialogue to pick up women in bars with insights from fields as diverse as chess, psychiatry, and the law, Brian Christian examines the philosophical, biological, and moral issues raised by the Turing Test.

One central definition of human has been a "being that could reason". If computers can reason, what does that mean for the special place we reserve for humanity?

"This book will surely change the way readers think about their conversations." ( Booklist)
"A heady exploration of the intersection of artificial intelligence (AI) and human nature. Christian's examination of the way machines are forcing us to appreciate what it means to be human leads him to explore everything from poetry, chess and existentialism…[and] offers an overview of the history of AI." ( Kirkus Reviews)
"This is a strange, fertile, and sometimes beautiful book. It has been said that man creates images of himself, then comes to resemble the images. Something like this seems to be going on with the computer. Brian Christian writes with a rare combination of what Pascal took to be two contrary mindsets: the spirit of geometry and the spirit of finesse. He takes both the deep limitations and halting progress of artificial intelligence as an occasion for thinking about the most human activity - the art of conversation." (Matthew B. Crawford, author of Shop Class as Soulcraft)

A Wedding of Computer Science and Philosophy

Brian Christian has wed computer science and philosophy in “The Most Human Human: What Talking with Computers Teaches Us about What it Means to be Alive.” From this book I have received new insights from Artificial Intelligence, interpersonal communication, and simple conversation. This book links computers and computer science to group and individual identity which will shift the reader’s thinking certainly. Parenthetically, if you are planning to read Stephen Baker’s “Final Jeopardy: Man vs Machine and the Quest to Know Everything” you might want to read this book first. If you have completed that book, put Christian’s book on your reading list immediately. Well written, informative, and entertaining. Read expertly by the author.

Fascinating examination of being human

I really liked this book. It was fairly well written and read. There were spots where the author went on and on about some obscure aspect of technology (e.g., lossy vs. lossless data compression) and some stretches where the focus seems to wander, but overall this was a fascinating and comprehensive examination of artificial intelligence and what it means to be human. I though the author could have provided a more consistent thread relating to his participation in the Turing test, but the competition itself was less important than his examination of the various aspects of humanity. I liked this book so much that I assimilated (i.e., read) it in one day, then again on the very next day. There was just that much fascinating detail to hold my attention as much the second time through as the first.

Brian Christian presents to the listener a wonderfully crafted text filled with linguistics, computer- and cognitive-science, philosophy and... chess! His book presents a fascinating tale of being classified as the "most human human" in a competition dedicated to testing computers' ability to act in a human fashion. As an interested layman in the aforementioned fields, I found this book engaging, simple but not simplistic and great to listen to.

Some interesting thoughts about 'what a human is', but more intersting philosphical discussion can be found in the short stories of 'The Minds Eye'. I admire Turring a lot (breaking the Nazi war codes was helpful). But its about time that someone said the obvious thing, the Turring Test is a silly and dated test. Its like you have two dogs, one is an excellent hunter, retriever, and search dog and one can bark out a word that sorta sounds like 'Hello' and you claim the second dog is smarter because it can talk. Computer intelligence will only ever really matter to the extent that it capitalizes on the strengths that computers have not on the degree that it mimics human behavior.

-Brian Christian really fleshes out the central anecdote, his participation as a convince-you-I'm-human "confederate" vs. AI chat-bots at the Loebner Prize (a Turing Test challenge), framing the contest with asides in psychology, philosophy of mind, physics, logic and computing, games, communication, language and linguistics, and other topics that illustrate the complexity of interaction on display here. Broadly insightful and rarely overwrought.

-Author's background in science writing and philosophy plus his MFA in Poetry correspond well to the fluidity with which he moves between tangential topics while keeping sight of the central theme. The book revolves around communication, in particular the written word since text is the format for the Turing Test undertaken, and Brian Christian's well-written prose shows off the fact that he studied and contemplated the topic well in preparation for his Loebner Prize contest and vie for the Most Human Human.


-Topically related to the also recently published book by
James Gleick, The Information: A History, A Theory, A Flood.

I have to say that the first half had me wondering why this book was so highly rated. The author's narration, while competent, was not exceptional, and I found the story hard to follow. BUT, beginning with chapter 7 I was enthralled! The ideas and concepts sparked out every minute and I could not stop listening. It's now past midnight and I will be wiped out at work tomorrow but I had to write a review. Brian Christian please write more -- your ideas are amazing!

I bought this book on a lark, since I needed something this month and it sounded quirky and interesting. And I was pleasantly surprised by a deeply philosophical inquiry into that space between computer science, philosophy and sociology, Three subjects that I find interesting, but I've never really studied before. It isn't a deep study of any particular subject, but I would highly recommend it, just the same.

Aside from that, the reading seemed to suit the writing perfectly. I think that it was read by the author, in which case he made an excellent choice doing so himself.

This is a MUST read for anyone interested in AI or, for that matter, pure human psychology. Christian (who, by the way, does a fine job of narrating!) presents, with StevenPinkeresque style and wit, the reasons why the computer, as it becomes stronger and stronger in the ways of logic and computation, ironically becomes farther removed from us rather than more like us. He helps to shake away the still clinging prejudices left over from the Age Of Reason and makes us aware that being a "creature-computer interface" is not such a bad thing, that the emotional, "irrational" part of us is a good bit of what makes us---well, us! All of this in a rich tapestry of science, case histories and personal anecdotes which makes for a very enlightening and enjoyable read. This is the best writing on the human mind I have read since Pinker's How The Mind Works, which would serve as a great companion to this book.

Sidenote: 10/8/2012 I took on several on of noted on-line bots, like Cleverbot and A.L.I.C.E., and was not at all impressed. They might be able to fake surface small talk or even argue (as long as it is in insult and not in reasonable debate)--but sustaining conversation on a topic, wondering, showing genuine insight or awe--I would never mistake them for a human at the other end.

An interest exploration of computers and humans

The author explores how humans try every year to make computers more and more human, even when we don't really know when their programs are "human enough"

I have often heard speakers use humans for inspiration in their attempts to build better A.I. - this is the first time I have heard an author use A.I. as a modus for building a better human. The erudition in this book is staggering, but it is never used boastfully. Instead the ideas get layered one on the other, building an artful and logical thesis. I was particularly inspired by his comparison of chess games to daily conversation; the beginnings and the endings are largely already known, the real chess playing lies in the middle game where the personality of the player comes through. In a conversation the work and the weather are standard openings - how we get away from the standard is where the real conversation starts.

One listen will not do for this book, I imagine I will be coming back to it many times in the years to come, as well as purchasing the hard copy in order to foist it on loved ones.