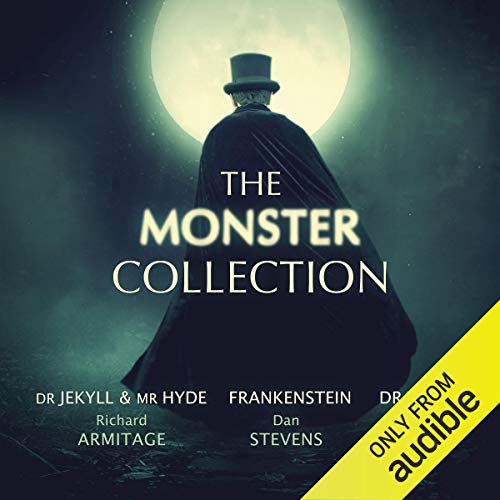 Bursting with intrigue and suspense, they resurrect the deepest and darkest of all our fears: that a monster lurks, and it lurks within us.

Introductions by Dr Maria Mellins and Dr Peter Howell, Senior Lecturers in Gothic literature at St Mary's University, London, this collection offers additional insight into these audiobooks, their authors and their legacies.

Starting with Robert Louis Stevenson's Dr Jekyll and Mr Hyde, Richard Armitage tells the story of a conflicted man who seeks to free the monster inside him from the clutches of his conscience.

Following his celebrated performances of David Copperfield and David Hewson's Romeo and Juliet for Audible, Armitage delivers another powerhouse performance as the narrator of this Gothic tale.

Shilling shocker enthusiast Stevenson was celebrated throughout his life. In contrast to Mary Shelley, who was often overshadowed by her husband's work, Stevenson lived comfortably by his pen.

It was only with the release of Frankenstein that Shelley finally distinguished herself. Frankenstein was groundbreaking in its ability to fuse passion and romance with gore and horror.

Narrated by Dan Stevens, who rose to fame through Downton Abbey, and Beauty and the Beast, the story of science student Victor Frankenstein has been artfully retold.

Testing the limits of science, Frankenstein fashions a living being from the conjoined body parts of rotting cadavers. Horrified at the end result, he abandons his monster, leaving him to endure a life of isolation and loneliness.

A poignant example of human weakness and our inability to take responsibility for our actions, Frankenstein is both moving and terrifying.

That leads us to the gruesome tale of Count Dracula, the bloodthirsty father of the undead.

Narrated by Greg Wise, star of The Crown and Sense and Sensibility; Greg depicts a young lawyer whose services are hired by a sinister Transylvanian count.

Releasing Dracula 80 years after Frankenstein, Bram Stoker was greatly influenced by Shelley's writing style and similarly propels the story along through diary entries, letters and newspaper cuttings. Possessed of grisly imagery and unexpected twists, it's no wonder that Dracula still manages to shake us to our very core.

All that remains is to offer a note of caution: this collection is not for the fainthearted. Old as these tales may be, do not mistake the unsettling nature of their content.

Grab some popcorn, turn the speakers up and enjoy. Just don't say we didn't warn you.

I loved this collection and I recommend it to everyone. If you are an Audible fan, this is something you have to get.

The Strange Case of Dr Jekyll and Mr Hyde was for me the best of the 3 books, both in terms of performance and story wise.

Both Frankenstein and Dracula were too melodramatic for my taste and as much as I enjoy watching both Dan Stevens and Greg Wise onscreen, neither of them has Richard Armitage's knack for audiobooks.

In this first book, each character really had their own voice, sometimes to such an extent that I could no longer recognise the familiar tunes of Armitage's own voice. That's how good it was.
I particularly enjoyed the voice transitions that revealed the switch from Jekyll to Hyde and viceversa.
The book's theme was the most interesting, it wasn't too long so it never got boring (3h aka only 1/10 of TMC's runtime) and I finished it all in a day.

As for Frankenstein it was probably the less stimulating of the 3. It was a continual retelling of life stories, one inside each other and Dan Stevens's voice, as soothing as it felt in the beginning, soon started to feel monotonous and not very modulated. The structure of the book didn't help much; still I feel like one telling their story seldom maintains the same entonation throughout the whole of it.

Walton was the character I most enjoyed hearing from. And to think that at the beginning I only wanted his letters to be over so it would finally get to the story, to the action...
I lost interest in the story from the moment of Frankenstein's reaction to his newly awakened 'monster'. I did enjoy the Coleridge quote right after that though.

Finally Dracula.
It made up 61% of the runtime but it thankfully wasn't as tedious as Frankenstein. It was again a series of intertwined accounts but it was much more organic. Once in a certain character's POV you had dialogue between several characters, so it wasn't as lonely and claustrophobic as being stuck between Frankenstein's complaining and the monster's winning. I didn't enjoy it per se but it wasn't a perpetual lamentation.

I was not keen on the remarks made by both male and female characters on the nature of the sexes. I've read older books that didn't feel as dated and medieval in that regard.

As to preformances, Greg Wise's reading of Dracula and of Dr van Helsing varied in tone but were both made in the same accent. The distinction between Jonathan Harker and John Seward was likewise minimal, if existent at all.
Saskia Reeves's Lucy and Mina were vert similar as well and her Dr van Helsing bordered on painful. Otherwise I think I liked listening to her more and both readers did a decent job in regards to voice modulation.

I ordered this audible collection because of Richard Armitage. He has an incredible voice and a very talented actor. I would listen to (almost) anything he decides to read. "Strange Case of Dr Jekyll and Mr Hyde" is unfortunately by far the shortest of the three novels.

The stories of all three are well known.
"Frankenstein" by Mary Shelley certainly deserves a closer look. Just as is the case with "Dracula" there have been so many adaptations, re-workings, continuations etc. of the story, in written form and as well as in movies that it is well worth to go back and read (listen to) the original. With the point-of-view of a 21st century reader, the creature and his creator deserve to be judged anew.

I was most familiar with "Dracula" before I started listening to it, having read the story several times before. It is noteworthy that for a modern reader the narration is overlong, interspersed again and again with philosphical musings and from our p-o-v pseudo scientific explanations. But this is to be expected from material dating back to the 19th century (and holds true for the other two novels as well).

And here I come to the point why I am writing this review, and it concerns the narrators rather than the material itself. Accents and dialects are not always easy to listen to but if they are done by native speakers they are what they are. In the case of actors/narrators putting on a stage act they can become excrutiating particularly when they keep going for pages and pages, or rather long agonising minutes. This is compounded by the fact that both, Greg Wise and Rachel Atkins, have to speak Van Helsing's words and the accents should at best ressemble each other. Neither gets it right and the longer it goes on, the worse it sounds. Van Helsing is said to be Dutch (although many of the words written in his dialogue seem to be more German than Dutch) - why both speakers make him sound like a non-descript Eastern European native is beyond me. Dutch or German accents are completely different. It gets more and more pronounced as the audiobook goes on. Particularly Rachel Atkins veers into an intonation that sounds more Finnish even (I have Finnish friends who sound like this to some extent). I haven't finished the book yet and I don't know if I will. After all, I know the ending and I wonder more and more whether it is worth being so thoroughly annoyed just for the sake of sticking it out.

There. Rant over. But I needed to say it.

What a pleasure to listen to these classic novels performed by such great artists. They read them so vividly, bring them into the 21st century. Am a great fan of Richard Armitage's work for Audible, as always he performs every single character in Dr. Jekyll with their own little quirks. Was not a fan of Dan Stevens - but am now! Frankenstein is one of the best audiobooks on Audible!! He always hits the right pitch of innocence, drama, empathy or despair, befitting the individual scenes, amazing...

Listening to these classics is not optional!

The movies don't do them justice. The concern for a dear friend, thirst for revenge, dread in the face of sheer malevolent power and determination to save your loved ones doesn't translate well to a screen.

Perfect narration and a must for anyone getting acquainted with British fiction and horror writing from the Victorian era.

Richard Armitage's performance was as amazing as always - a pleasure to listen to - though out of the three stories Jekyll and Hyde is my least favorite. I've also enjoyed Dracula very much, however I was disappointed by Frankenstein - my favorite of the three - because of the whiny nature of the Creature's voice: I had to force myself to listen until the end of the second book. I liked the voice of Victor just fine though.

Literature out of time

Let me start this by saying that the books included in this collection are a piece of history that everyone should read. Alone by that criteria, they should be rated 5/5, since they spawned countless other genres and sagas we enjoy to this day.

That being said, I consider myself a "modern reader" and out of perspective of someone who enjoys 21st century literature, this is one of the worst reads I ever had to endure.

The books are boring, slow and predictable. The stories are basically a collection of letters, diary entries and telegrams. The relations between men and women, out of today's perspective, are simply ridiculous. But that is to be expected, it is in the end 19th century literature.

So I'll rate this not for its historic value, but for it's entertainment value and modern expectations. 2/5 stars is really stretching it.