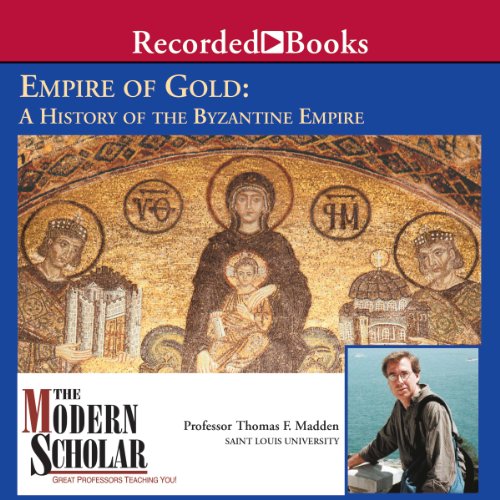 The Modern Scholar: Empire of Gold: A History of the Byzantine Empire

The Modern Scholar: Empire of Gold: A History of the Byzantine Empire

In this epic course, esteemed university professor Thomas F. Madden offers a fascinating history of the remarkable culture and state that developed out of the ancient Roman Empire, particularly its eastern portion, throughout the Middle Ages. The story begins at the end of the Roman Empire in the third century AD and continues over the next one thousand years.

With incisive commentary, Professor Madden leads a discussion covering Justinian's re-conquest of the West, the great city of Constantinople, and the aftermath and influence of this extraordinary empire. The term "Byzantine" was invented by modern historians to identify the final millennium of the Roman Empire. By the third century and into the fourth century, there were changes in the Roman Empire so profound that historians during the Enlightenment began to call the period Byzantine rather than Roman. Most historians would place the beginnings of the Byzantine Empire roughly around the reign of the emperor Diocletian, who instituted widespread reforms to halt civil wars and economic decline.

One of the primary characteristics of the Byzantine Empire was the relegation of Rome to a place of honor only. Rome was not the capital of the Byzantine Empire. The capital, instead, was Constantinople. Therefore, power was based in the eastern Mediterranean. Next was the dominance of Greek culture and eastern perspectives, and a final characteristic was the integration of Christianity into the social and political fabric of the empire. Constantinople was the beating heart of the Byzantine Empire and the greatest city in the Western world at this time. Constantinople sat at the crossroads of the world and controlled east-west land traffic. Eventually, the fall of Constantinople to the Ottoman Turks reverberated across the Christian world. Europeans now saw a world in which nothing stood between them as the last remnant of free Christendom and the ever-growing powers of Islam.

As a history student, I always felt that the Byzantine Empire played a critical role in the development of Western civilization, yet it had always been shrouded in a cloud of mystery. This audio book blows that cloud away, allowing the listener to see the historical events that shaped European development as it emerged from a backwater collection of barbaric forces and into a viable player on the world scene.

Professor Madden is a competent lecturer; both thorough regarding pertinent facts as well as cyclical; meaning that he brings the listener back to points he had made earlier, effectively tying together sequences of events and how they interrelate.

After reading a review by another reviewer regarding the heavy "Christian bias" in this work, I feel that he must not be referring to this book at all, but another, for I found zero bias regarding any particular viewpoint. Christianity is certainly emphasized, as it must be with regard to the history of Byzantium (or of the West in general), for it played an enormous role in the shaping of policy, diplomacy and gave cause for empire-shaking wars and conquests.

Constantinople was filled with churches, monasteries, icons and the like. It was an extraordinarily religious city. It's relationship with Rome was hampered by differences in religious doctrine - minor points by atheists' standards or the generally non-religious, but the people of that time period were anything but that. Therefore, various doctrinal points regarding their eternal fates would certainly play a major role in all the aspects of their lives. Dr. Madden simply presents the facts. There is no bias.

Admittedly, I enjoy lectures. This cannot be said of all people. I enjoy a dry presentation as well as a sparkling one; provided the facts are straight. This is grade A material, sure to be enjoyed by any budding historical scholar.

Would you listen to The Modern Scholar again? Why?

I have downloaded just about all of Prof Madden's downloaded stuff and it is all excellent, amusing, clear, interesting and informative. He is a great lecturer and, as an additional bonus, has a lovely voice.

I've listened to this book about 4 times. Not in one sitting. The fact I've listened over and over again is testimony to how informative and interesting it is- and as a lecturer, Prof Madden is great. Not at all condescending.

Wish it were longer

This was a good listen but really left me wanting more.
I wanted more connections made between the different lectures.
I'm usually a fan of the Modern Scholar series but every time I got really interested in a topic it felt like it ended.
The structure was separate lectures on some important topics (important according to the author) but they seemed somewhat disjointed from one another.
I wanted more connections made between the different themes.
Definitely listen if the topic interests you but if you are addicted to this kind of audiobook (like I am) It might not leave you feeling entirely satisfied.

An answer to my prayer

I have been looking for an audiobook on the history of the Byzantine Empire for ages, and this lecture pretty much was the next best thing, this lecture should be deemed a sequal or continuation to the other lecture "decline and fall of Roman Empire."

Fantastic overview of the Byzantine Empire

Professor Madden provides a comprehensive and comprehensible overview of the history of the Byzantine Empire. Each lecture is 30 minutes in length and overs a distinct and yet interlocking topic. The lectures precede in chronological order, which makes it very easy to follow. Extremely well done.

Fall of Rome in the East, Rise of Muslims, etc.

No doubt, Constantinople was the central theme throughout. It was important to hear its successes against multi year sieges and the riches and central power it yielded. Crusades made an important theme for several lectures as well.

The end of the lectures came too soon and I was clamoring to learn about the Russian History and its associated legacy.

I intend to learn more about the crusades and the paralleled Russian state of the 1200-1400s as it will provide context to better understand today.

I listened to this one before i'd got the hang of writing reviews, but I had to go back and tell everyone about these lectures. The way John Madden explained the intrigues, social changes and catastrophes that befell the Eastern Roman Empire, it sounded like a fantasy or spy trilogy, and yet it really happened. It made me want to read more about Byzantium, whi'ch I've been doing. I don't know why more historical novelists don't set their stories in this period. Many of the tragic characters who played their part are worth a novel. The Modern Scholar seminars are expensive, but well worth your credit. I've purchased quite a lot of them, and this one's the best so far.

I listened to this series prior to a trip to Turkey. First, the good news. The lecturer clearly knows the subject, and had a fair amount of intersting insights. If you like lots of detail, lots of dates, and lots of names, and want to find the themes on your own, this series is for you.

However, I didn't enjoy it. First, there was way too much emphasis on naming each leader. At times it sort of like reading the some of the latter chapters of the biblical book of Numbers (i.e., the decendants of X was Y, and Y begat ZZZZZZZZZZZ).

I think a better way of approaching such a long sweep of history would have been to lay out some themes and mention individual rulers to make the point.

Second, there was virtually NOTHING about where all the gold came from. At one point, the lecturer said "lots of money changed hands there" and then went back to droning on about some supposedly juicy palace intrigue. I would have liked something more about what goods were being traded there, and why it was so profitable.

Thomas Madden does an excellent job of covering this very long time period. I have listened to this presentation several times, and was even inspired to print the syllabus. Glad I did, because it named Professor Madden's reading material, now I can go deeper. I guess that makes the good Professor an inspiration as well. I purchased this lecture because I drive a truck, no sense in not learning while I drive. Like most drivers, I am also an avid reader.

Prof. Madden gives a great overview of the rise and fall of the Eastern Roman Empire. I highly recommend it.