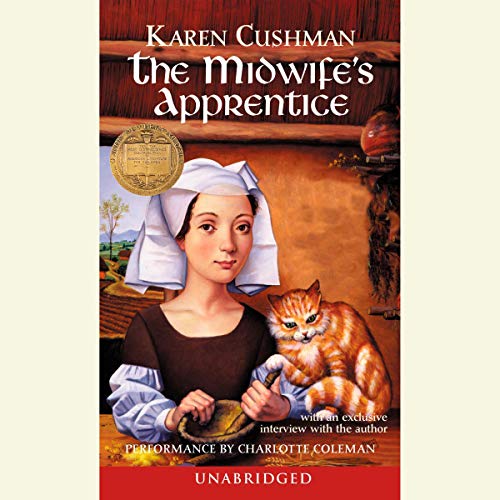 On a frosty morning sometime in the 14th century, in a village somewhere in England, a girl known only as Brat was sleeping in a dung heap.

When she opened her eyes, she saw an important-looking woman with a sharp glance and a sharp nose and a wimple starched into sharp pleats. This woman was Jane the midwife, and she needed a helper....

The Midwife's Apprentice, by the author of Catherine, Called Birdy.

Thus begins the funny, wise, compassionate story of the homeless waif who became the midwife's apprentice - a person with a name and a place in the world.

This Newbery Honor-winning story, complete with an epilogue read by the author and an extensive author interview, conducted by a young "fan", will usher young listeners into the middle of the 14th century.

This version is abridged.

This is an abridged version of the text but is not marked as such. I was using as a read aloud for my middle school literature class and it skipped whole paragraphs! Frustrating!