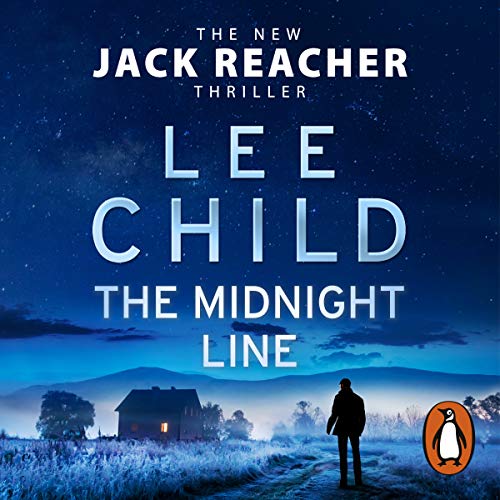 Jack Reacher takes an aimless stroll past a pawn shop in a small Midwestern town. In the window he sees a West Point class ring from 2005. It's tiny. It's a woman cadet's graduation present to herself. Why would she give it up? Reacher's a West Pointer, too, and he knows what she went through to get it.

Reacher tracks the ring back to its owner, step by step, down a criminal trail leading west. Like Big Foot come out of the forest, he arrives in the deserted wilds of Wyoming. All he wants is to find the woman. If she's OK, he'll walk away. If she's not...he'll stop at nothing.

He's still shaken by the recent horrors of Make Me, and now The Midnight Line sees him set on a raw and elemental quest for simple justice. Best advice: don't get in his way.

"Each year Lee Child comes up with another Reacher. Each year I lap it up. Love it... Best one for a while... there is something subversive as well as page-turning.... The sentences are short, but that doesn't mean the thinking is small.... I don't know another author so skilled at making me turn the page, at putting me in the thick of it all." ( The Times)
"I just read the new Jack Reacher novel by Lee Child…. It is as good as they always are. I read every single one." (Malcolm Gladwell)
"Addictive... Child's trademark staccato-style delivers all-action excitement as well as a sombre message about the hypocrisy of the US war on drugs." ( Metro)

I finished it easy enough but it was Reacher predictable. I love the way he writes and the narrating was as good as always. However the plot was a bit predictable and somehow familiar. Probably won't listen to this one again.

In the series - this book is one of the less exciting ones out there. Moving on to the next one. Not going to remember this one in a week..

I am an ardent fan of Jack Reacher. The Midnight Line story line is unexpected, yet fit the Reacher character perfectly. As always Jeff Harding is the perfect voice for Reacher and the rest of the cast.

The first half was excellent. the second half was boring and pointless. Almost like he finished the original story and thought, this is a short book. better add some more.

First Jack Reacher I have ever read, thoroughly enjoyed the story and the narration was excellent. Will definetly be reading more.

I watched the Jack Reacher movie and enjoyed it, but found the book boring and predictable .
The story moved very slow and went nowhere fast.
This was not the Jack Reacher of the movie, this guy belonged in a nursing home.
The narrator was boring. Reading in monotones.

Another great book by Lee Child

Another great book by Lee Child. Really liked the story. Can't wait for the next one

Jack Reacher is back!

Reacher is back to his incredible self, enjoyable from start to finish. A character like no other. Lee Child manages to hold the attention of the reader with the simplest details. Pulling the reader in, painting a detailed picture, all without the need for multiple story arches, overly complex relationships or new character introductions. Simple, brutal, real, thoughtful - all words to describe this book.

Terrible narrative. This is probably a great book but I can’t get past the narrator

Not up to standard. Repetitive and lacking in suspense. Narrator's monotonous and singsong presentation distracting.