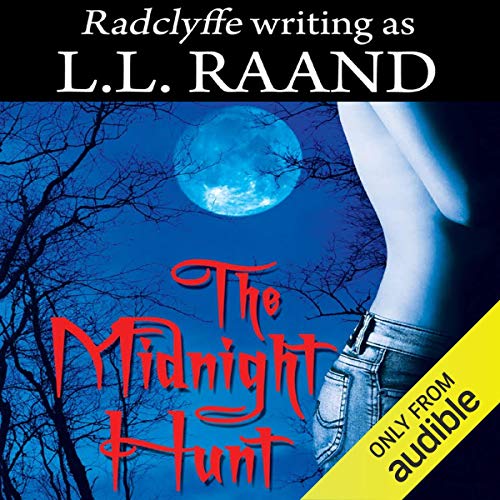 What do you do when you wake up to a whole new life...with dangerous urges you can't control? Medic Drake McKennan has never been good at following protocol, so she doesn't think twice about rendering emergency care when a teenager's life is at stake - even if the young girl is in the throes of Were fever and any sane human should know better. It isn't the bright shining pain of the bite or even the wrenching agonies of the fever that convinces Drake everything in her life has changed. It's the way she feels about the blonde with the wolf-gold eyes who awakens a dark hunger she can't control...and doesn't want to. Sylvan, the Alpha of the Adirondack Timberwolf Pack, is the one female Drake can't have. And the only one she craves.

paranormal at its best !

i have always been a fan of radclyffe and wanted to dive back into this paranormal series than hooked me in several years ago. listening to it was a good solution. it forced me spend an equal amount of attention to each chapter : i've read the book at least three times and had the tendency to squeem over passages to focus on sylvan and drake interactions. i wonder why ^^

YOWZA! THIS IS QUITE THE STEAMY TALE!

Before you go any further, if you're uncomfortable with heavy eroticism, this is definitely NOT the book for you! This story reminds me of HBO's True Blood. All the signs are there, they've got werewolves, the fei (fay?), vampires, and more, all coming out of the shadows to exist amongst humans. With all the paranormal hormones spiking off the charts, it's really an over the top type of fantasy story with the characters being hot and bothered 90% of the time. The narration was even super charged and dramatic, but, it was par for the course, considering everything else that was going on. This isn't a book for everyone, but if you're ready to take a listen on the wild side of erotic fantasy, this one is a winner!

This series highlights every fault in Radclyffe novels. The line between Butches and Femmes is even more pronounced and is in fact given more distinct titles; dominants. and just as with other novels by Radclyffe there is very little difference in personality between the butches. And I really don't like how far they go to not call the werewolves hermaphrodites. I mean it's blatantly obvious that that's what the author wanted to write about and yet it's never directly addressed they go so far as to include males in the culture when basic evolutionary logic would suggest that if the females had evolved the ability to procreate indipendantly then the strictly male werewolves would have been slowly breed out of the species.
a few things I disliked about this series in particular. the whole obsession with sex is just off putting. the whole vampire power set is rediculous. It makes every confrontation with the sex - slave weres laughable. the wolves have no advantage or defence and therefore there's no point pretending and yet everyone does. And worst of all; it's not exciting in the least when absolutely everything turns on the werewolves. pain, anger, any negative emotion just gets them hard and it's disturbing. there's a scene in the second book when one if them is getting tortured and she just can't stop organisming. I mean WTF. that is not even masochism it's just wrong. the fact that complete negative stimulus overload can cause sexual satisfaction is horror worthy. It's too close to the idea of rape idolizing.

What could L. L. Raand have done to make this a more enjoyable book for you?

Cut about 50% of the random, bizarre sex scenes. Make the female wolves have female sex organs.

All of them and start over with more realistic ones.

I feel like I got ripped off. I know this author and enjoyed a lot of her other books but this one was horrible.

I loved this book!

This is my first experience with LL Raand or audible books with "Were" or "Vampire" characters. I enjoyed it immensely.

I have to say that my favorite scene was between Drake and Silvan during Drake's transition.

I loved the scene after Drake's transition when she was wrapped in the arms of her fellow pack. It really showed the closeness and love of the pack.

A different take on the paranormal.

Drake. Nothing intimidated her.

The narrator's voice if so well to this series that I have already listened to this book twice in since I bought it and I've only had it a month.

What could L. L. Raand have done to make this a more enjoyable book for you?

My main complaint is that the graphically written sex scenes between women overshadowed the story. The characters were either having sex, thinking about sex &/or both so much that what little storyline there was lost.

Not for those with ADD

If the author had made the narrative voice more clear. There was nothing to distinguish when someone different was 'speaking.' Given that there were five different narrators, it made things very confusing and jumbled. Especially since the author would suddenly switch perspectives in the middle of a scene instead of the end or beginning of another.

What was most disappointing about L. L. Raand’s story?

The book focused far to much on sex. Every scene had characters participating in sex, thinking about sex, watching sex, or discussing sex. It got repetitious and dull. Couple in the fact that the genitalia of all the female werewolves more resembled a male's than female, and it just made every scene uncomfortable rather than sexy.

If you could play editor, what scene or scenes would you have cut from The Midnight Hunt: Midnight Hunters, Book 1?

All of the female leads were practically identical personality wise. Headstrong, Brash, and Aggressive. They even had the same mannerisms and quirks; for example, they all put their hands on their hips when they were mad.

The only real differences between them were looks, species, and name. Had I not been conveniently told that the previous narrator was no longer the main perspective, I'd of thought it was the same person.

Yes. The storyline is great, the raw passion between the characters is breath taking.

The fact that Drake did not allow Silvan to deter her from getting what she wanted.

What does Maxine Mitchell bring to the story that you wouldn’t experience if you just read the book?

At first I hated her voice, the narration but I gradually got use to it and then realized based on narrators I have listened to before, there's no better narrator for the title.

Drake... I was dying for her to claim Silvan as her own.

This audiobook had me hurrying to get things done so I could continue listening. I love the characters, the storyline and the roles each individual played. well done!

This is an amazing book!

Would you consider the audio edition of The Midnight Hunt: Midnight Hunters, Book 1 to be better than the print version?

the audio book brought the book alive of me!

All the great characters and plots!

Have you listened to any of Maxine Mitchell’s other performances before? How does this one compare?

It will get your blood pumping no doubt about it.

Good book and looks like a great series. Do yourself a favor and just get this whole series it is wonderful!

overdramatised card board characters, I couldn't finish the book the unbelievable dialog was too annoying, the voice actress did her best with what she had