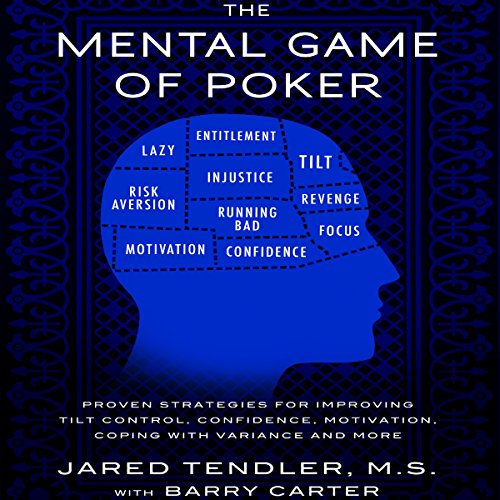 The Mental Game of Poker

The mental game may be more important in poker than in any other form of competition. It's one of the only games in the world where you can play perfectly and lose - again and again. Hundreds of poker players have turned to mental game coach Jared Tendler's revolutionary approach to help them play their best, no matter how badly they're running. In this audiobook you'll find simple, step-by-step instructions and proven techniques to permanently fix problems such as tilt, handling variance, emotional control, confidence, fear, and motivation. With the games getting tougher, now is the time to take these problems head on.

One of the best resources for aspiring poker pros

If you could sum up The Mental Game of Poker in three words, what would they be?

This is an extraordinary book for people who play poker regularly. I will say that this is not the first book you should read about poker if you are just starting out. Jared only covers poker strategy peripherally and there are much better resources for learning the game. That being said, if you are someone who has studied the game a fair amount, someone who wants to play poker seriously and make some money or especially if you are someone who dreams of playing professionally this book is a must have.

Just the sections on learning (concepts like the inchworm and the adult learning model) alone are worth the price of the book, but Jared goes much deeper into how these relate to common poker problems in later chapters. His in depth discussions about tilt, motivation, fear and confidence blew my mind. Instead of generally accepted poker wisdom which deals with treating the symptoms of emotion or striving to avoid emotion while playing (or avoid playing while emotional), Jared delves into finding the root causes of emotions and ultimately teaches players how to master their emotions and use them as a tool to get better at poker.

As someone who has spent a lot of time trying to control my own tilt, and made a lot of progress at reducing it, I was deeply impressed and humbled to realize that a lot of it stems from unrealistic beliefs and expectations about the game of poker and the nature of variance. It is too early to say for sure that my emotions won`t get the better of me at the table again (and, in fact, I`m sure they will), but with the strategies and insights Jared has provided in this book I am confident that I will be able to recognize and better understand my emotional responses in the future.

Ultimately the subject matter of this book extends far beyond poker. A lot of the mental hurdles faced while playing poker are the same ones faced in athletics, business, academics and even romance. Think of pressure to perform or the pain caused by a discordance between expectations and results as a couple of examples. One of my main interests is martial arts and especially the philosophies that guide developing martial artists. Jared never mentions this in his book, but a lot of the mental goals and strategies he describes are very similar to those found in the processes of ego death and transcendence of desire. These are lofty goals, and lifelong struggles, but Jared gives you all the tools needed to work hard at becoming a more zen like poker player and human being.

What was one of the most memorable moments of The Mental Game of Poker?

- The ALM and Inchworm learning models

Who would you have cast as narrator instead of Jared Tendler?

There are a lot of issues with the recording of this audiobook. Unlike some of the other reviewers I don't mind Jared as a narrator, but I did find his voice/pacing a little monotonous and slow. I actually listened to the majority of this audiobook on 1.5x playback speed and found it easy to follow. The really bad part of the narration for me was the client stories. I liked the stories, but the voice used for them was atrocious. It sounds like Jared used a computer generated voice to read back the stories. It's especially jarring when a female client's words are read in this voice.

Side note, I actually know a few of the featured clients (by reputation, training videos and forum posts), and I think these stories are an essential part of relating the concepts to real life examples. Unlike the reviewer who described them as advertisements, I think they play an important role in the understanding of the material. Not only is it useful to hear the clients relate Jared's somewhat abstract strategies to concrete examples, it is also very useful to hear about people that have succeeded using these tactics. Because a lot of the concepts in this book fly in the face of conventional wisdom, and especially because a lot of the strategies/goals are lofty and will take a lot of consistent work, I think it is essential for players to have real life success examples so they are less likely to give up before achieving meaningful results.

Another issue with the recording is the very nature of the book. It is not the type of material that eloquently transfers to audio. The book features a lot of lists, suggests a lot of cross-referencing and jumping around (much easier to do on paper than in an audiobook setting), and ultimately requires a lot of re-reading to fully digest. I have no regrets about purchasing the audiobook (in fact it's the best poker decision I've made in a long time), but I will be purchasing the actual book in the near future to make sure I get the most from the material.

One last thing, I absolutely loved the brief sections narrated by the British guy. He concisely states a lot of complex ideas, and I might just be partial to accents, but his narration was a breath of fresh air.

Yes. I sat down to listen to the first two chapters but got hooked. I ended up listening to this book all through cooking dinner, cleaning the kitchen and doing laundry. I woke up the next day and my first thought was listening to the rest of the book, although I had to complete some other tasks first. Now that I've finished I will be reviewing the sections one by one and working through some of the suggested assignments. It's definitely not a book that can be absorbed all at once, but I found the subject matter so compelling that I couldn't put it down. Now I'm looking forward to going back and studying certain sections one at a time.

I'll be recommending this book to all of my poker playing friends (except maybe the ones I play against regularly).

Narrator spoke in monotone and very quickly at times, not leaving enough time to digest the concepts he's talking about. Have to repeat over and over

Definately recommend to all; even non-poker players. Great science-based insights for everyone who wants to be better at any activity and improve oneself at setting and accomplishing goals.

What other book might you compare The Mental Game of Poker to and why?

Jared's book and methods are to the mental side of poker what Doyle's Super Systew is to the strategy side of poker.

Cadence was well metered but the alternate voice sounded mechanical and contrived. Should have used actual players or someone else's voice.

No. Too much info for 1 sitting.

An advertisement disguised as a book

What could Jared Tendler and Barry Carter have done to make this a more enjoyable book for you?

It would have been great if there had been actual content in this book instead of the constant endorsements by former students.

The book is not a total waste, but it does not bring anything new to the table. The constant client endorsements made it more of and advertisement for his services instead of a book that could stand on its own.

Yes, it touches on very important aspects of the game that otherwise go ignored by the average player.

The way Jared teaches you to recognize and correct habits you may have to improve your game.

Have you listened to any of Jared Tendler’s other performances before? How does this one compare?

No, but I will be looking for other books after I get done listening to this one and repeat listening it a couple more times.

Something more about poker and less about bad beats

Has The Mental Game of Poker turned you off from other books in this genre?

If you could play editor, what scene or scenes would you have cut from The Mental Game of Poker?

Book was boring. Poker is a game of patience. Everyone suffers bad beats. We all know that Nobody enjoys them. Some people enjoy talking about them, but nobody enjoys listening to them. The side stories stunk

Needs a better author and reader

No, reading this book was not time well spent.

Would you recommend The Mental Game of Poker to your friends? Why or why not?

It felt like arduous plodding. I really felt it could have been shortened by half.

Did The Mental Game of Poker inspire you to do anything?

Psychology of the holes in your game

Absolutely. It's not necessarily a complex set of instructions but definitely something to review and gauge your progress.

Would you be willing to try another one of Jared Tendler’s performances?

The performance of the book was a little rough. Not the best recording and Jared doesn't seem all that comfortable behind the Mic. That may be beneficial to the reader as it sounds like you're listening to a doctor talk to you.

a must for your mental edge in poker and LIFE.

Would you consider the audio edition of The Mental Game of Poker to be better than the print version?

yes... it allowed me to relax and absorb versus having to focus on reading and absorbing at the same time.

Which character – as performed by Jared Tendler – was your favorite?

it made me think deeper.

References pages of the book that are supposedly important yet there is no accompanying PDF file.

Probably the most useful poker book

Excellent poker book, if I had to suggest one this would probably be it.
I really enjoyed the audiobook but I would suggest to have a written copy as well since it is kind of a go to manual that one should frequently consult.