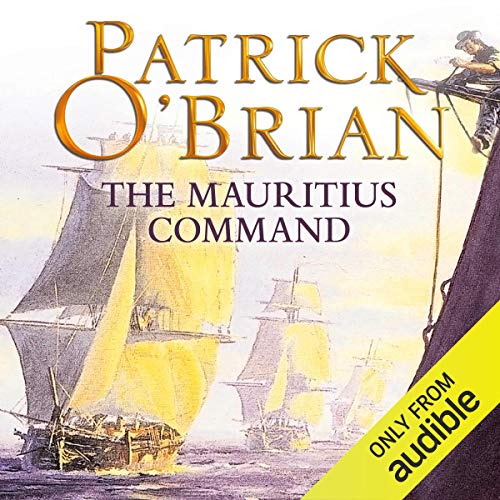 In The Mauritius Command, Captain Jack Aubrey is ashore on half-pay without a command until his friend, occasional intelligence agent Stephen Maturin, arrives with secret orders for Aubrey to take a frigate to the Cape of Good Hope under a Commodore's pennant. But the difficulties of carrying out his orders are compounded by two of his own captains: one a pleasure-seeking dilettante, the other liable to provoke the crew to mutiny.

Based on an actual campaign of 1810 in the Indian Ocean, O'Brien's attention to the detail of early 19th-century life ashore and at sea is meticulous. This tale is as beautifully written and as gripping as any in the series; it also stands on its own as a superlative work of fiction.

best action of the series so far

best action of the series so far. not that i mind the romance plots and slow character building of the previous novels, but the naval combat and surgical scenes in this one were particularly exciting and dynamic

The fourth entry in Patrick O'Brien's Age of Sail books about the bosom buddies Jack Aubrey (navy man through and through) and Stephen Maturin (surgeon, naturalist, spy), The Mauritius Command (1977), probably features the most action in the series up to this point. The novel begins domestically enough, with Stephen visiting Jack at his poky Hampshire cottage where he lives with his wife Sophie, their twin girls ("bald babies" with "pale, globular faces," turnip-like noses, and the air of being "infinitely old, or members of another genus"), her obnoxious niece Cecelia, and her atrocious mother Mrs. Williams. They're struggling to get by on Jack's half-pay (as a post-captain without a ship), because Mrs. Williams lost all her money and Sophie's dowry in a foolish investment. Their hives house cobwebs rather than bees; their vegetable garden is rife with caterpillars and flies; their cow is cadaverous and dry. Jack, whose natural medium is the sea, is clumsy and lugubrious on land and spends long hours in his jury-rigged observatory gazing longingly at passing ships.

Luckily for Jack, Stephen has managed to get him an important commission: he is to captain a frigate to the Cape of Good Hope, where he will join a squadron of British ships to help them give Bonaparte and company a black eye by taking the French island colonies of and around Mauritius. Stephen is to deal with intel, propaganda, and diplomacy, while Jack is to be the Commodore of the entire action. This is but a temporary post, after which he will resume being a post-captain, but success may land him a baronetcy. It surely gives Jack a host of new worries and frustrations, partly because he frets at not being able to take part in the plans he designs, partly because he must give orders to captains who are the lords of their own ships and hope that they will perform well. It is thus vital that he accurately assess their strengths and weaknesses, and they don't get on well together. In fact, Lord Clonfert envies, admires, fears, worships, and hates Jack and feels an over-mastering desire to impress and surpass him, which, combined with his dashing behavior and manic-depressive personality, makes for a compelling character.

Throughout the novel O'Brien liberally (though never tediously) sprinkles age of sail details about food, ships, tactics, and the like, as well as about Stephen's interest in flora and fauna and human nature. And, of course, plenty of action: ferocious, "hammer and tongs" naval battles, delicately coordinated land and sea attacks, aborted actions, cat and mouse games, and more. O'Brien never repeats a battle scene, whether by its events or by how he narrates them. Now he thrusts us up close and personal into real-time action, so that we hear the thundering broadsides crashing into our ship and see the deadly wooden splinters flying around and smell the powder and blood; now he stops just before an action is about to begin and lets us see what happened in the fight by reading over Jack's shoulder as he writes an enthusiastic but circumspect letter about it to Sophie. Some of the most suspenseful scenes involve transferring landlubber Stephen from one vessel to another.

The most enjoyable part of O'Brien's books is the rich friendship between Stephen and Jack as they age, share more failures and triumphs, and gain more (not always accurate) insights into each other's character. For example, "Jack loved him, and had not the least objection to granting him all the erudition in the world, while remaining inwardly convinced that in all practical matters other than physic and surgery Stephen should never be allowed out alone." Another funny example occurs when Stephen warns Jack, "To swim so soon after dinner, and such a dinner? I cannot advise it. You are very corpulent; full of gross, viscous humours after these weeks and months of Poirier's cooking. . . . dinners have killed more men than ever Avicenna healed." Stephen's continuing ignorance about the navy is mildly exasperating to Jack and comforting to the reader. And they give each other warm endearments: "my dear," "joy," and "brother."

But O'Brien avoids writing simple bromance sea adventures by including the horrifying wounds resulting from naval warfare, the slimy politicking behind promotions and appointments, the insoluble psychological mystery of Clonfert, and the occasional misanthropy of Stephen, as when Jack says, "Without there were babies, we should have no next generation," and Stephen replies, "So much the better, when you consider the state to which we've reduced the world they must live in, the bloody-minded, wolfish stock from which they spring, and the wicked inhuman society that will form them."

With a sensual poetry O'Brien evokes the experience of being at sea in the age of sail, whether feeling so cut off from the land as to be in another world, being becalmed, surviving a hurricane, or getting under way in a frigate:

"The Raisonable began to speak as she bore up for Rodriguez, spreading sail after sail: the masts complained, the taut rigging sang with a greater urgency, the sound of the water racing along her side mounted to a diffused roar; the complex orchestra of cordage, wood under stress, moving sea and wind, all-pervading sound, exalting to the sea-borne ear."

Readers who like authentic, character-driven historical sea fiction (especially like that by Forester and Lambdin set during the Napoleonic wars) must like O'Brien's books, but should begin with the first in the series, Master and Commander, for although each book is self-contained, all work together to tell one composite story.

The reader Ric Jerrom is flawless; only he can be Jack and Stephen and O'Brien's narrator for me.