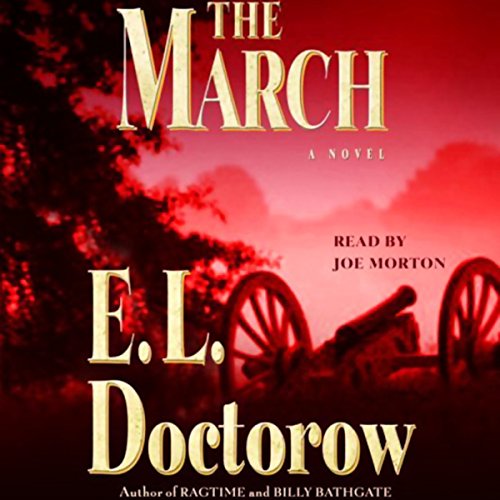 In 1864, after Union general William Tecumseh Sherman burned Atlanta, he marched his sixty thousand troops east through Georgia to the sea, and then up into the Carolinas. The army fought off Confederate forces and lived off the land, pillaging the Southern plantations, taking cattle and crops for their own, demolishing cities, and accumulating a borne-along population of freed blacks and white refugees until all that remained was the dangerous transient life of the uprooted, the dispossessed, and the triumphant. Only a master novelist could so powerfully and compassionately render the lives of those who marched.

The author of Ragtime, City of God, and The Book of Daniel has given us a magisterial work with an enormous cast of unforgettable characters: white and black, men, women, and children, unionists and rebels, generals and privates, freed slaves and slave owners. At the center is General Sherman himself; a beautiful freed slave girl named Pearl; a Union regimental surgeon, Colonel Sartorius; Emily Thompson, the dispossessed daughter of a Southern judge; and Arly and Will, two misfit soldiers.

Almost hypnotic in its narrative drive, The March stunningly renders the countless lives swept up in the violence of a country at war with itself. The great march in E.L. Doctorow's hands becomes something more, a floating world, a nomadic consciousness, and an unforgettable reading experience with awesome relevance to our own times.

"In this powerful novel, Doctorow gets deep inside the pillage, cruelty and destruction, as well as the care and burgeoning love that sprung up in their wake....On reaching the novel's last pages, the reader feels wonder that this nation was ever able to heal after so brutal, and personal, a conflict." (Publishers Weekly)

Authors and historians uniformly treat war as either an individual's experience or some combination of military strategies and conquests. Almost never does an author show that war is not either or, but both.

Doctorow walks the tightrope in this gripping story of battles, conquests, race, class and individuals....especially individuals, representing every stripe and type all swallowed by Sherman's multi-bodied beast and its inexorable march to the sea.

In covering Sherman's campaign, the author makes it emblematic of the whole Civil War. The casual cruelty is more than any planned offensive. The lives broken and reformed a kind of mirror of a ravaged and remade Union.

There's not a single slow passage in the whole narrative and the urge to listen to it from beginning to end in a single sitting nearly irresistable.

More than any tale in memory, this is the most compelling reconstruction of what Civil War really meant.

This is a must have!

This is a most enjoyable book, one of the best I have heard. There are many different voices ranging from the accents of southern, both those born free and the enslaved. There is also the ride range of voices found among the northerners. The reader does an excellent job.

The character development is wonderful and even though you know how the American Civil War ends, The March keeps you interested in its characters. You want to know what happens to Pearl, the newly freed young slave girl, Miss Emily, the judge’s daughter who looses everything when Sherman comes to town, particular soldiers, troop followers and a host of others affected by General Sherman’s march. You spend some time with Sherman and his officers, and the privates on foot. You meet an army surgeon born in Germany and a British reporter.

You encounter the brutality of war and still find some humor. The unexpected happens.

It is a good solid listen and one I look forward to hearing again.

This is the best book I have heard or "read" since joining Audible. I think that the writing and the reading were excellent. For civil war history buffs, this is a must. I have tried others by this author and not been able to finish. I thought that the discussion of the many factors of the march and the war were very well done. I will look for other books by Doctorow now.

?The March? is a well-constructed listen with a good narrator. Like many of the audible listeners I keep a book on my iPod at all times and find this one of my favorite parts of the day. I listen to the New York Times on the way to work and a novel home. I am a Civil War buff and found some interesting insight here. The suspense, however, was not so great that I sat in the car in the garage. That is my criteria for a great novel. I give it a 4 of 5.

Exceptionally well written; Doctorow has mastered the English language and tells a fascinating, fact-based tale which kept me engrossed. The narrator is the best I've heard in an audiobook and he truly brings the characters to life.

And Joe Morton is my new favorite narrator. This book defines Sherman's march by the outlines created by the stories of the many, varied and interesting characters portrayed. It is beautifully done, with outstanding descriptions and characterizations. I hated for it to end!

Doctorow at his Best!

Finished this book in 2 days. Doctorow's masterfully intertwines the stories of the people affected by the most Uncivil of wars. This is Doctorow at his absolute best!

Joe Morton made all the difference in the world in enjoying this book. He made all the characters come alive. His delivery is making me listen to it again

Out of the Shadows of History

Most people know, at least in a general sense, about the scorched-earth horrors of William Tecumseh Sherman’s March to the Sea. But now this pivotal time toward the end of the American Civil War takes on a new and often disturbing life.

E.L. Doctorow has given it a face. Actually, many faces. Joe Morton gives it voices.

The effect is riveting.

I listened to the March on a 5 hour drive to Charleston And couldn't wait to get back into my car to continue with this moving, powerful and insightful novel. The narrator fit the book to a T. I likened the experience to watching a Ken Burns' documentary and was sorry to see it end.