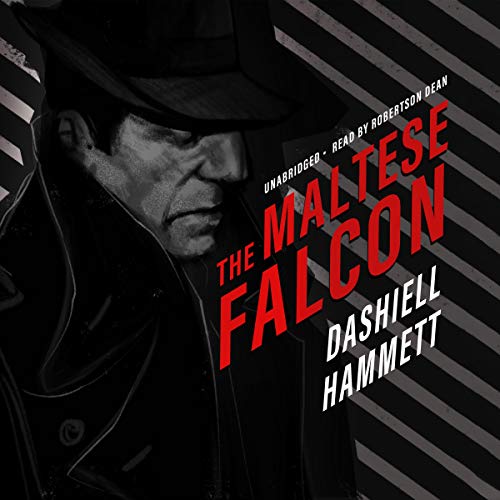 The definitive masterpiece of the hard-boiled detective genre, The Maltese Falcon first appeared in the pages of Black Mask magazine in 1929 and was almost immediately acknowledged as not only a great crime novel but an enduring masterpiece of American fiction.

Tough, cynical PI Sam Spade - a man who, as his creator explained, is "able to take care of himself in any situation, able to get the best of anybody he comes in contact with" - is hired by the story's irresistible femme fatale, Brigid O'Shaughnessy, to locate the client's sister by tailing her companion. Spade's partner, Miles Archer, takes on the assignment, and quickly both he and the man he was shadowing are murdered. As Spade pursues the mystery of his partner's death, he is drawn into a circle of colorful characters - all of them after a legendary statuette of a falcon fashioned long ago for King Charles of Spain.

Made of gold and encrusted with jewels, the falcon is worth a fortune. Missing for centuries, it resurfaced in Paris in 1911, covered in black enamel to disguise its value, and then disappeared again until it was traced to Constantinople - and now, it would seem, to Spade's own backyard.

Maybe a couple of scenes were a tad overwritten but the pace, action and story qualified this as a one-session listen. Great characters and a fast moving story makes this one of the greatest noir novels of all time.

Not as good as I would have expected

I'll lead off with the fact that I have never seen the movie. That said, knowing that this book was made into the quintessential film noir I may have set higher expectations than I should have. The book is very good. I think perhaps I was expecting more mystery, akin to The Thin Man, than the raw, blue-collar detective work that fills this book.

Who could take a classic story and make me not want to finish it? This narrator has the enthusiasm of a wet mop.

Well read in the style of the genre

I highly recommend if you are a fan of the movie, or have not seen the movie.

I’ve heard about this book and this author for a long time and of course I saw the movie. This was exactly what I expected.....even a little more hard boiled.

I felt that some sections of the book just went on and on. The story was ok, this was perhaps my first detective book, and probably the last; not my cup of tea.

The narration though, was excellent. Probably the one thing that drew me in to the book was the narrator.

I came here from the movie, and loved the book.

I don’t understand why anyone is bothered by how the narrator voices the women. He voices them in a way that lets you know who’s talking, but doesn’t sound mockingly, in the way that Effie sounds different than Bridgett without resorting to a lazy high pitched voice for that.

The story itself is excellent, but does drag on towards the end almost unnecessarily, giving the actual ending of the book a little disservice. Without giving a spoiler, they spend an hour going over something that doesn’t really add much to the story, but then rushes the actual ending, which I suppose is the author’s fault to pull it all together. It did a great job of keeping me on the edge of my seat.

Add to Your Library

This was my first time reading/hearing this classic. It's famous for good reasons. I'm not usually into mysteries, but this was well-worth the listen. Great performance by Robertson Dean, too.

Recognized many of the scenes from the book in the movie. I’m an Bogart fan and John Huston. Thought the book was followed closely by the movie.

The story is as good as most of Hammett’s, but the performance by the narrator, tries for atmospheric and reaches only dull.