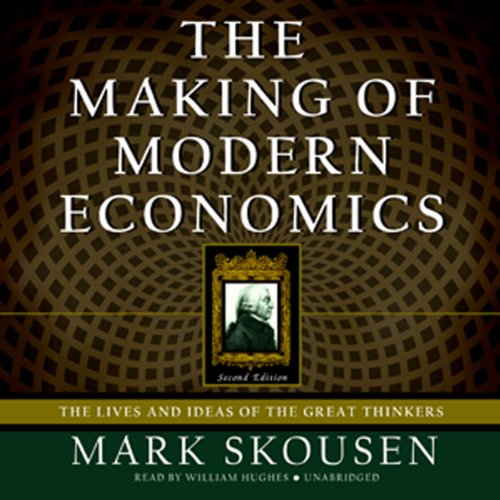 The Making of Modern Economics

Here is a bold, new account of the lives and ideas of the great economists - Adam Smith, Karl Marx, John Maynard Keynes, Ludwig von Mises, Milton Friedman, and many others - all written by a top free-market economist and presented in an entertaining and persuasive style. Professor Mark Skousen tells a powerful story of economics with dozens of anecdotes of the great economic thinkers.
©2009 Mark Skousen (P)2009 Blackstone Audio, Inc.
Divertissement et célébrités Economie
Afficher plus Afficher moins

Don't Let the Author's Bias Scare You Away!

Mr Skousen brings us a solid, comprehensive and thoroughly entertaining history of modern economic thought from Adam Smith to the present day. Skousen succeeds wildly in making esoteric economic theories accesible, and draws in the reader/listener with quirky stories about each of the economists: Why did Adam Smith Burn all of his clothes? What was the story behind J.M Keynes's hand fetish? Who fathered Marx's housemaids child? These are just a few of the high points of this work.

Admitedly, Skousen is strongy biassed towards a Neo-Classical/Austrian viewpoint, and holds some quesitonable ideas, but don't let that turn you away! The author does a great job explaining each Economists viewpoint in a clear, concise, logical way; I was even able to get a good handle on some of Marx's important formulas from Kapital while driving on the freeway. This book is that good! Skousen is very careful to completely present each Economist's bio and arguments first and only then move on to a critique on their more questionable assumptions.

In regards to the narrator, I have no idea what the other reviewer is talking about. Hughes speaks clearly, pronounces German and French words well ans seems honestly excited in his narration. In fact, to me he seemed so excited that I initially thought it was the author narrating his own book.

Overall, having listened to some of Sowell's audiobooks and a few of the great courses on Economics, I have to say that this is the best choice on Audible to get readers excited about Economics. Well worth the credit!

Author uses descriptors like "good" and "bad" to describe ideas in a way I find obnoxious. I was looking for more of an even handed overview. The bias was extreme. The first couple chapters were good but I couldn't finish the whole audio-book.

I think the title and description of the book misrepresented the subject. I thought I would be more of a survey of early economists and their ideas. But it turned out to be Mr Skousen glorifying some economists and savagely attacking those he disagreed with. Ok, I get it. You don't like Marx. Not as a writer, thinker, not as a person. And you look down on your students if they show interest in Marx. Ok, cool down. Be prepared for several chapters on this subject. It seemed a large part of the book is devoted to this. More than about Smith, perhaps.

I should have researched the author more. He is pretty far out there, friend of Rudy Giuliani. Recommended by the Ayn Rand Institute.

I am enjoying "Economics" from Timothy Taylor of the Great Courses on Audible.

Where does The Making of Modern Economics rank among all the audiobooks you’ve listened to so far?

Again I have my homework to do. Yet Skousen does for Economics what Tesla did for Innovative Power. He is objective, well researched, and focused on what he wants the reader to do, not to judge the character of an Economist, but do their ideas work? From the beginning of the story, he introduces to great Economics, their habits, their idiosyncrasies. He does not give you Economics straight, but provides a chaser with antidotes, along with pertinent facts. He is far ahead of the game of his Academic Communities than he knows. He is on the verge, if not there, on the Mt. Everest of Greatness!

What other book might you compare The Making of Modern Economics to and why?

I like him, had a terrible Economics Professor in 101 Econ back in College. If the Professor, unlike Skousen's The Making of Modern Economics, could have made me majoring in Economics rather than Ancient and U.S. Histories.

What does William Hughes bring to the story that you wouldn’t experience if you just read the book?

Hughes is fresh, lively, and sounds as if he never tires, he is a welcomed relief, and does what is supposed to, bring the text alive with crisp inflections.

Well, Skousen seems to use what I would like to call "Oral Histories" or "Action History" where you, and he, study together events, and the effects of theory making in the world of Economics. This book is a must read for anyone in Government, State, Local and at the Federal Reserve.

If you teach Economics at any level, think if Skousen could be described as an NBA player; He could be considered to be another Lebron James!

You see? It is possible to write about the topic of economics and make it engaging, informative, and fun. Wish I had this book when I was taking my economics classes decades ago. I enjoyed economics in spite of our textbooks. However, a book like this would have inspired far less dedicated students to see how enjoyable the topic can be. This is a wonderful read I highly recommend.

not quite objective, but a good survey

At times, perhaps because the author inserts himself, the book asks the reader to assume not only that the story of modern economics is a story about the conflict between socialist-focused and laissez faire-focused economic views but that there are only those binary choices for understanding the possibilities for economics. The survey itself is good, but you realize eventually that it is towing a party line and that the author's position is that one of those views categorically represents the good guys.

Skousen subscribes to the Austrian school of economics, as do I. (Austro-libertarian)

Adam Smith's "wealth of Nations"was written 100 years before the Austrian school was founded by Carl Menger. But, for whatever reason, at least in my studies, Smith is rarely mentioned in the Austrian resources.

Skousen gives a good account of Smith's influence on the future science of economics.

He also gives brief, but good accounts of other important economists and their influence(good and bad).

if you want logical fallacies look no further

A better name for the book is: In praise of Adam Smith and criticism of any idea that does not conform to Smith's philosophy.

At the beginning it seems like a mildly biased book in favour of free market economics; however, later on Skousen reduces himself to criticizing the personal lives of economists he does not like. There is more on the character of Marx, Keynes, and Ricardo than on their ideas and even the ideas of Adam Smith.

I believe Skousen does a disservice to free market economics by being vague and trivializing the most important differences between Smith's and Friedman's economics and others.

Would you consider the audio edition of The Making of Modern Economics to be better than the print version?

No, because the audio version is missing the last chapter of the book. The audiobook abruptly ends before getting to the recent developments in economics, including the behaviorists among others. Very disappointing.

Please contact me when the last chapter is available!

I'm no economist but this gave me a very enjoyable exploration into the history of economics. I think that anyone who wants to enter the discussion of capitalism vs socialism should read this. The ecosystem of economics it's one of the greatest unsung human achievement, but once one studies it's dainty features one comes to appreciate it's flawed beauty.