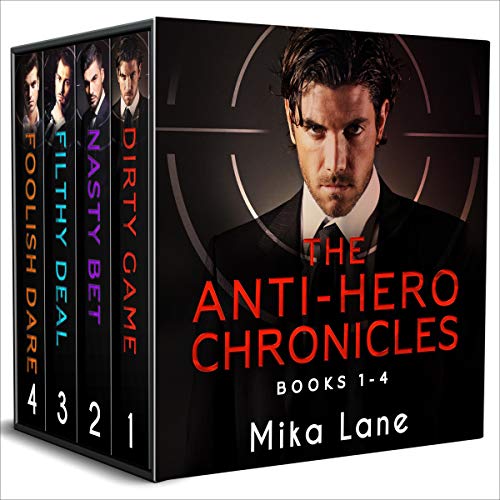 Four steamy, full-length stories of badass mafia men and the women they make their own.

We saved her. Now, we own her.

Mob twins Luca and Leo Borroni say I’d be dead without them. That they spared my life. And that I’m now in their debt.

My payment? I must play their game. Their dirty, sexy, deviant game. But games have winners and losers. And we know who’ll win this one.

Because, men like the Borronis always win. They aren’t called the most brutal men walking the streets of Sin City because they’re sweethearts.

I’m no match for their wicked ways. I may have survived their shootout, but I’m not sure I’ll survive what’s next.

I was an innocent college girl...until they took bets on me.

I’m not perfect. In fact, I might have a little problem. And it might involve breaking the law.

When mob boss Leo Borroni and his buddies catch me in the act, well, I’m pretty much screwed. They take bets on how far I’ll go to get out of the mess I'm in.

They’re coming to get her. But they’ll have to kill me, first. She saw something she should not have. Now, her life is in danger.

That happens when you’re in the wrong place at the wrong time. And you get mixed up with the wrong man - me.

Her sister’s missing, and she’s next. Not my problem, I always say. But she was so...different.

So, I made a deal to help. And my deal was just as filthy as you’d think.

I'd never love my father's worst enemy. But I was forced to marry him, anyway.

Our wedding will be in your father’s hotel. You will invite 200 guests, so we have plenty of witnesses on our happy day.

Your father will walk you down the aisle, dance with you, and give a delighted speech. Then, you will come home with me, where we will live happily ever after.

These hot, over-the-top romances include sexy mafia hit men with a penchant for pursuing and protecting the women who give them a run for their money. If you love outrageously naughty stories as a way to indulge your not-so-secret bad girl side, this is for you.

I was only able to listen to one of the 4 stories. The storyline was weak - and felt like a novice writer. On top of not a great writer, you have the narrator. The narrator’s vocal fry was too much. It made listening difficult, and ruined any type of allure. I also could not stand her male voices - they weren’t different enough. I also think the male perspective chapters should have been a guy narrator, might have helped. I ended up returning it.

The storylines are okay, but so much alike that it’s almost silly, same lines, quotes, etc in every book, and the plot is similar in each also. But the thing that really killed it for me was the narration... it was so hard to get through! Way too over done on inflections to the point of being comical, you can’t take the story serious due to the narration.

I really enjoyed listening to all of these books in one audiobook. I also like when the author writes each book as a standalone but lets us revisit characters in previous books. This collection brings us into the good and bad aspects of mafia life. However, these men will do whatever it takes to protect their women, families and friends. These stories include revenge, killings, secrets, finding love, and hot love scenes. Each story kept me captivated throughout the book. The narrator did an awesome job of portraying the emotions of these characters and holding my attention. I highly recommend this Audible book. I found it very entertaining.