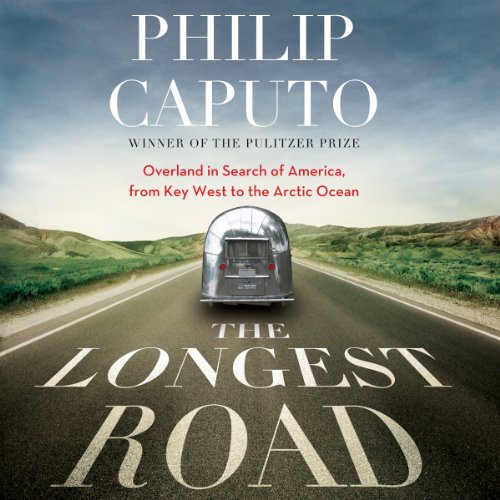 September 1996 found Philip Caputo on Barter Island, a wind-scoured rock in the Beaufort Sea populated by two hundred Inupiat and a handful of whites. As he gazed upon an American flag above the only school for a 150 miles, he marveled that the children in that school pledged allegiance to the same flag as the children of Cuban immigrants on Key West, almost six thousand miles away. Awed by America’s vastness and diversity and filled with a renewed appreciation for its cohesiveness, an idea began to form. With enough time, gas money, and nerve he could drive from the southernmost point to the northernmost point of the United States that is reachable by road, talking to people as he went and trying to better understand what holds our great country together.

Cicada-like, the idea went dormant, not to be reawakened for 14 years. In 2011, America was struggling through the greatest economic downturn since the Depression and was more divided than it had been in living memory. Caputo, who had just turned 70, his wife, and their two English setters took off in a truck hauling an Airstream camper from Key West, Florida, en route via back roads and state routes to Deadhorse, Alaska. The journey took four months and covered 17,000 miles, during which Caputo interviewed more than 80 Americans from all walks of life to get a picture of what their lives and the life of the nation are really about in the 21st century.

"Pithily capturing...characters and opinions about the state of America, Caputo snares...devotees of a classic American theme, the road trip." ( Booklist)
"Caputo... rovides ample historical background to the trip’s sites and a nice dose of humor. Curious and genuine, he weaves these elements together to produce a continental tale that is always engaging and frequently reassuring." ( Publishers Weekly)
"Pure joy. The best thing to come along since Blue Highways and Travels with Charley." (Doug Stanton, New York Times best-selling author of In Harm's Way)

This is the first travel book I've listened to. It had a good pace, with just enough detail to help you see, in your mind's eye, what Phil Caputo was experiencing.

I loved the whole story line of the travels. the stories of so many many people and their opinions were educational & funny at some points. Only recommendation. ... please get out there and explore more.

Talk more about the trip and less on politics

I listen to audio books to get away from the politics of the day. This author spent way to much time on his left wing views. He seems to have a disdain for southerns, conservatives,and Tea Party folks. If I wanted to hear that, all I have to do is turn on the daily news. I tried to but all that aside, but I couldn't get pass chapter 10.

Would you consider the audio edition of The Longest Road to be better than the print version?

I did not read the print version, so I cannot tell a lie....I just don't know

This was a fabulous travel journal type of book, a lot like Bill Bryson' s stuff. I loved the whole story

Again, a travel diary is quite a bit different in its story telling technic than other forms so to difficult to pick one favorite chapter, they all had a little something wonderful.

When his wife had to fly home and he realized how much he loved being with her when originally he wanted to do the trip alone.

I really did love this book, writer has a great grown up since humor and managed to add a bit of history as well as psychology to the story, hard to put down....actually I didn't put it down, stayed up all night to listen.

A condescending history lesson, with accents.

I'm about half way through but I've had to skip several parts due to the condescending accents the narrator keeps using. First sounthern, then Latino, some african I think. I'm losing interest & doubt that I'll be able to finish. It also feels like a history lesson instead of an account of America today.

This is not a mere travelogue. Along the way, Philip Caputo asked the question of what holds this country together. I'm not sure if the book provided any answer, but it does give a sense of optimism that the people in this diverse country are generally good, and this is a country of opportunity. While I would not rank it as high as William Least Heat Moon's "Blue Highway", the author's background as a journalist provides him with a different perspective as most travel writers.

The narrator has a most annoying tendency to have a certain predictable lilt in his tone whenever he took the voice of a non-white character. Is he trying to make the character sound innocent or naive? Sound curious or in wonderment? I don't know, but it almost sounded like he was stereotyping non-white characters. This completely goes against the author's illustration of the diversity of people in this country. While this is a book that I will certainly read, I will not listen to this audio book again.