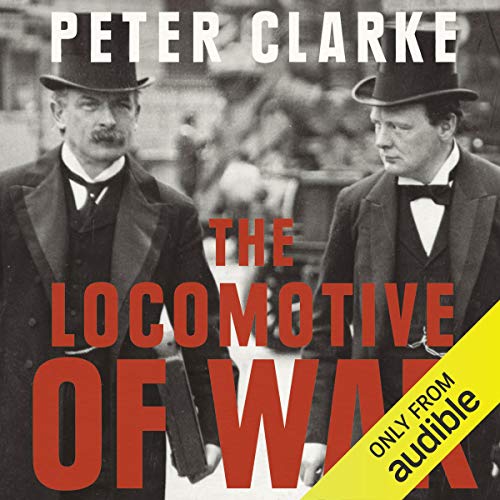 The Locomotive of War

A fresh and fascinating reappraisal of the first half of the 20th century from one of our foremost historians.

'War, comrades,' declared Trotsky, 'is a great locomotive of history.' He was thought to be acknowledging the opportunity the First World War had offered the Bolsheviks to seize power in Russia in 1917. Twentieth-century warfare, based on new technologies and mass armies, certainly saw the locomotive power of war geared up to an unprecedented level.

Peter Clarke explores the crucial ways in which war can be seen as a prime mover of history in the 20th century through the eyes of five major figures. In Britain two wartime prime ministers - first David Lloyd George, later Winston Churchill - found their careers made and unmade by the unprecedented challenges they faced. In the United States, two presidents elected in peacetime - Woodrow Wilson and Franklin Roosevelt - likewise found that war drastically changed their agenda. And it was through the experience of war that the economic ideas of John Maynard Keynes were shaped and came to exert wide influence.

When the United States entered the First World War in 1917, President Wilson famously declared: 'The world must be made safe for democracy.' This liberal prospectus was to be tested in the subsequent peace treaty, one that was to be bitterly remembered by Germans for its 'war guilt clause'. But both in the making of the war and the making of the peace, the issue of guilt did not suddenly materialise out of thin air. As Clarke's narrative shows, it was an integral component of the Anglo-American liberal tradition.

The Locomotive of War is a forensic and punctilious examination of both the interplay between key figures in the context of the unprecedented all-out wars of 1914-18 and 1939-45 and the broader dynamics of history in this extraordinary period. Deeply revealing and insightful, it is history of the highest calibre.

Peter Clark obtained his title from Leon Trotsky’s (1879-1940) famous quote in 1922 “War is the locomotive that forces the speed of historical change”. In this book Clarke adopts a transatlantic focus and depicts the effects of war on British and American liberals as they reacted to the challenges and strains of World War One.

The key men in the book are Woodrow Wilson (1856-1924), David Lloyd George (1863-1945), Winston Churchill (1874-1965), Franklin Delano Roosevelt (1882-1945) and John Maynard Keynes (1883-1946). Clarke makes a point that all but Lloyd George were from the upper-class backgrounds. He also makes a point they inherited William Gladstone’s (1809-1898) moral emphasis. None were socialists but all were working to transform the role of government and the workings of the economic system. Clarke sets out to explain his theory of why and how the liberals, who prided themselves on being pacifists, “started a world war”.

The book is well written and researched. Clarke has the ability to leaven serious political analysis with gossipy anecdotal comments. Clarke reinterprets the twentieth century and also asks questions of the present. The author provides brief biographies of each of the key men in the book. Clarke is a professor of modern history at Trinity Hall at Cambridge University.

The book is fourteen and a half hours long. Jeremey Clyde does a good job narrating the book. Clyde is an actor and an award-winning audiobook narrator.