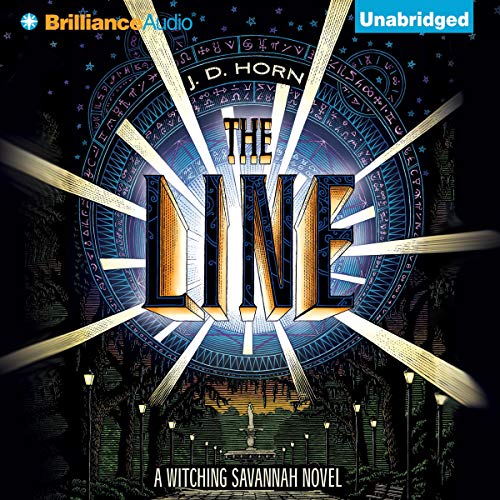 Savannah is considered a Southern treasure, a city of beauty with a rich, colorful past. Some might even call it magical....

To the uninitiated, Savannah shows only her bright face and genteel manner. Those who know her well, though, can see beyond her colonial trappings and small-city charm to a world where witchcraft is respected, Hoodoo is feared, and spirits linger. Mercy Taylor is all too familiar with the supernatural side of Savannah, being a member of the most powerful family of witches in the South.

Despite being powerless herself, of course.

Having grown up without magic of her own, in the shadow of her talented and charismatic twin sister, Mercy has always thought herself content. But when a series of mishaps - culminating in the death of the Taylor matriarch - leaves a vacuum in the mystical underpinnings of Savannah, she finds herself thrust into a mystery that could shake her family apart...and unleash a darkness the line of Taylor witches has been keeping at bay for generations.

In The Line, the first book of the Witching Savannah series, J. D. Horn weaves magic, romance, and betrayal into a captivating Southern Gothic fantasy with a contemporary flair.

Savannah is perfect for witches and hoodoo

J.D. Horn introduces us to the addicting series 'Witching Savannah' with 'The Line.' This book is set in Savannah, Georgia and the magic that lives there. Mercy is the daughter of a powerful family of society witches, but Savannah is also home to hoodoo root doctors and a bevy of ghosts. Residents are used to the unexpected and unexplainable.

Mercy has a fraternal twin, Maizy. When they were born their mother died bringing Mercy into the world. Mercy barely survived and was born powerless but her beautiful, loving twin was born with an extraordinary amount. While Mercy felt the sting of neglect she also had freedom. Mercy was openly called 'The Disappointment,' and Maizy was showered with attention but also expectation. It would have been easy for Mercy to be jealous but she found all the love she needed in her twin.

Minor romance drama leads Mercy to reach out to a dangerous, disdained, Root Doctor named Mother Jilo. Mercy has fallen in love with Maizy's boyfriend, but she is not looking for Jilo to have him fall in love with her. She wants Jilo to cast a spell on Mercy to fall in love with her best friend who she knows would make her happy. Jilo explains the basics of magic and power, something her family never bothered to do. Jilo can cast this but only with sacrifice...not guilt. Mercy sees the mistake but Jilo won't turn back warning her family and her trust in them is misplaced. The intrigue begins.

The next day her evil Aunt Ginny dies. More accurately, she is murdered. Mercy had been summoned to Ginny, the families seat of power and anchor to The Line. As Mercy enters the room she sees her Aunt has just had her severed. Like a normal human, she doesn't call the police she screams drawing her family to the scene. The search for the culprit begins and opens doors to many family secrets and questions. Mercy learns her Aunt was an Anchor to The Line, a magical barrier created by thirteen witch families and held in place by thirteen witches to protect the world from demons. Demons that would enslave us. Ginny's seat of power is empty and the vacuum must be filled. The families descend.

Horn has given us good YA fiction. It's loosely YA, as Mercy is twenty, but it is coming of age. The romance is minimal and secondary to learning to deal with your family as adults, and finding purpose and a place in the world. It just takes place in a beautiful gothic construction of Savannah with witches. It passes the Bechdel test, and it's a good mystery. I listened to an audible version narrated by Shannon McMannus. She has a beautiful southern accent that made me feel like I was in Savannah. She also did well with character differentiation. If you enjoy audible books this is a good series to listen to. It is lighter fare but well worth your time. I've picked up the second in the series.

I was surprised I liked this one so much. Set in Savannah, about a young girl who is twins with a witch sister - our girl is somewhat shunned by the family because she did not get any 'powers'. Everything went to the sister. Part supernatural and part love story and part general slice of life with interesting well developed characters. Outside my normal milieu of dark and twisted deceptive stories, I find I am ready for the next book - not out yet...

Has potential but fizzles in the end

Was The Line worth the listening time?

I am still not sure how I feel about this book. It had potential and did hold my attention until the end, but It broke down in the end so I have no desire to read the next one.
It is NOT a YA book. There are to many adult things going on and the main character is 20, though does not always act it.
At the end of the book, I wanted to throw it at the wall and say, You are kidding right. (if it wasn't my kindle, I would have) It was just to much for me, too many stupid decisions and I did not like where it ended up.

While I liked the book, I didn’t love it. My biggest issue with the story was the lack of world building. I kept getting the sense that I had walked into the middle of a movie. I felt like there was something missing. I’m not sure I understood the idea of the ‘line holders” or what the fight with the demons was all about. I also needed more back story about the family members. Things became a little clearer in the end, but for I felt like it too a little too long.

And in all honesty, it was a cute story. But that's just it-- a story. The novel didn't resonate with me, and in all honesty it didn't rate high for me. I felt I had heard this story before, and probably have with the cumulation of all the YA books I read as a young teen. I think I'd have really loved this book if I read it when I was 13 or so. It was easy to predict, and I found enjoyment in guessing whodunit and being right. So, I won't read the sequel.

Not as good as I'd hoped.

I always listen to books while doing other things, so yes.

Would you recommend The Line to your friends? Why or why not?

I'm not sure that I would. The characters just aren't strong enough, they don't make you care for them and the story is missing something.

What aspect of Shannon McManus’s performance would you have changed?

Did The Line inspire you to do anything?

This book seemed to have all the right ingredients, but in the end fell short of my expectations. It was ok, but I don't care enough about the characters or the story to try the next one.

A good start but stumbles a bit.

What did you love best about The Line?

The plot was interesting, limited info dumping to a minimum and didn't give the plot immediately away within the first chapter.

The main character Mercy was the most interesting. She seemed fairly fleshed out as well as Oliver.

The entire love quadrangle. If Mercy was younger (13-15) I cold maybe see this as an important plot element but it just bogged things down.

The Voice Actress could convey emotion well and fitted it to what was happening in the narration.

I didn't like that there were only a few unique voices and sometimes the VA mixed up which character was speaking and used a different voice.

Overall it's not a bad beginning to a series. The novel suffers from a few issues, like having a too neatly tied up ending. I wish Jackson, for example, could have been a great loose end.

The whole love plot was strange and detracted from the plot for me.

Will I start to read yet another series?

I tore through this Audio Book in two days over two long hikes.

I liked it, but I am still contemplating if I liked it enough to continue on with the series.

Thinking about why I didn't give this 4 stars, the only thing that comes to mind was that it kept on going and going... you thought you finally at the conclusion of the story and then there was another layer and yet another layer, but for whatever reason, I didn't care for it.

Well written & performed; read it to the end

If you could sum up The Line in three words, what would they be?

My favorite character was Jilo, but not till the end of the book, when the truth about her history was revealed in one "throw-away" line. What a great twist that was!

What does Shannon McManus bring to the story that you wouldn’t experience if you just read the book?

I have a great passion for hearing well-written words spoken aloud - and she does that really well.

The story of the twins' birth and their mother's death was moving, of course. There were other scenes that were moving, but the intermittent discussion of that moment (throughout the book) was especially so.

Savannah is one of my favorite towns, so I was delighted for it to become very much a "character" in the book. Every character in the novel rang true to me, making me more aware of my southern heritage than I have been for many years. I strongly suspect, in some ways, that the twins and I shared the same grizzly grandmother! (Not literally, of course, but they were very much the same type.)

Absolutely. It has everything to provide entertainment. It has humor, mystery, secrets, love, betrayal, the South and magic. And the perfect balance of each. The author describes the characters, the situations and the scenery quite well but doesn't turn the descriptions into filler.

I found everything about this story enjoyable. I had just finished a great book and like many readers, couldn't find another to hold my interest. And I tried a dozen. I purchased this on a whim and I am so happy I did. It caught my interest right away and kept it all the way through. Now I will have that trouble again.

Shannon was just right for this book.

Yes and I tried but finally fell asleep at 1AM and I'm usually asleep by 10:30. Woke up and the first thing I did was to start listening until I finished. No TV, no phone calls, no housework........

Yes! I will be buying the next book in the series as soon as it is released. Fortunately that is next month. This author is a treasure and I can't believe my good fortune in finding him. Pure entertainment at its best.